Racing at Meydan on Thursday, the final meeting of the season at the UAE’s flagship racecourse and penultimate fixture of the whole local campaign, is highlighted by the Zabeel Trophy sponsored by Emirates Airline, a 1600m turf rated conditions stakes for which a capacity field of 16 has been declared.

Richard Mullen rides Velorum, trained by Charlie Appleby and the only runner on the eight-race card for Godolphin. A 5-year-old gelded son of Sea The Stars, he ran twice at this year’s Dubai World Cup Carnival, finishing eight in both the 1400m Group 2 Al Fahidi Fort and 1600m Group 2 Zabeel Mile. He was not beaten far on the latter occasion and was a carnival winner in a carnival handicap last February, his only start of 2020.

Mullen said: “It looks a nice spare ride to pick up and he has plenty of good form in the book. It looks a good spot for him, but it is a strong race. Hopefully we will be thereabouts.”

Satish Seemar saddles Seniority, the mount of Tadhg O’Shea, for Nasir Askar and returning to 1600m having finished fourth behind stable companion Irish Freedom in the 2200m Group 3 Abu Dhabi Championship almost three weeks ago. Yet to win after nine attempts in the UAE, seven for Seemar, the 7-year-old Dubawi gelding won five times in Britain for William Haggas, the three most recent occasions over 1600m. the latest was in August 2018. Haggas also campaigned the horse, then owned by HM The Queen, twice at the 2019 carnival, failing to land a blow on either occasion.

Assistant trainer Bhupat Seemar said: “The 2200m was probably too far and his optimum trip is probably 1800m or Thursday’s 1600m.

“He has been working well all year and this looks an ideal race for his final appearance of the season.”

Doug Watson appears to have two live chances in the form of Gabr and Mount Pelion, the latter seemingly the choice of Sam Hitchcott. A close, and arguably unlucky, fourth on his carnival debut, second start for Watson, in a very competitive handicap over this 1600m course and distance, he then disappointed over 1800m, also on Meydan turf but had an excuse in that Saturday fixture handicap.

Meanwhile, Shadwell’s Gabr, a 6-year-old Intello gelding, has the assistance of Adrie de Vries seeking to double his UAE tally after a 1600m Jebel Ali victory on his seasonal debut in the middle of November. He was also well ahead of Mount Pelion in the aforementioned 1800m turf handicap, finishing second behind an easy Appleby/Godolphin winner in Eastern World.

Watson said: “Obviously it is a tough race, but both seem in good form. Mount Pelion bled after his last race, but we pretty sure we have that sorted so he should run better. He remains a nice horse.

“Gabr has been running well all season and is versatile, particularly regarding surface. Hopefully he will also run well, but as I said, it is a competitive race.”

Bin Ghadayer said: “All three are in good form at home and have been throughout the season. They need to replicate their work at home on the track though which they have not been doing, though Mordin only ran once for us, and after a long break.”

Sharing the burden of top weight are Royal Dornoch and Moqtarreb, one of five Shadwell runners in the race, for Musabbeh Al Mheiri and Ali Rashid Al Rayhi respectively.

Royal Dornoch will be having his third start for Al Mheiri and drops markedly in class having contested the 1351 Turf Sprint on the Saudi Cup undercard and Super Saturday’s Group 3 Burj Nahaar over 1600m on the Meydan dirt. When trained in Ireland by Aidan O’Brien, the 4-year-old Gleneagles colt won the 1600m Group 2 Royal Lodge Stakes at Newmarket as a juvenile and the Group 3 Desmond Stakes, over the same trip, at Leopardstown last August.

Please note, the first race time is 5.30pm, an hour earlier than the traditional Thursday start time of 6.30pm to facilitate the eight races.

The season concludes with seven races at Al Ain on Friday, beginning at 7pm. 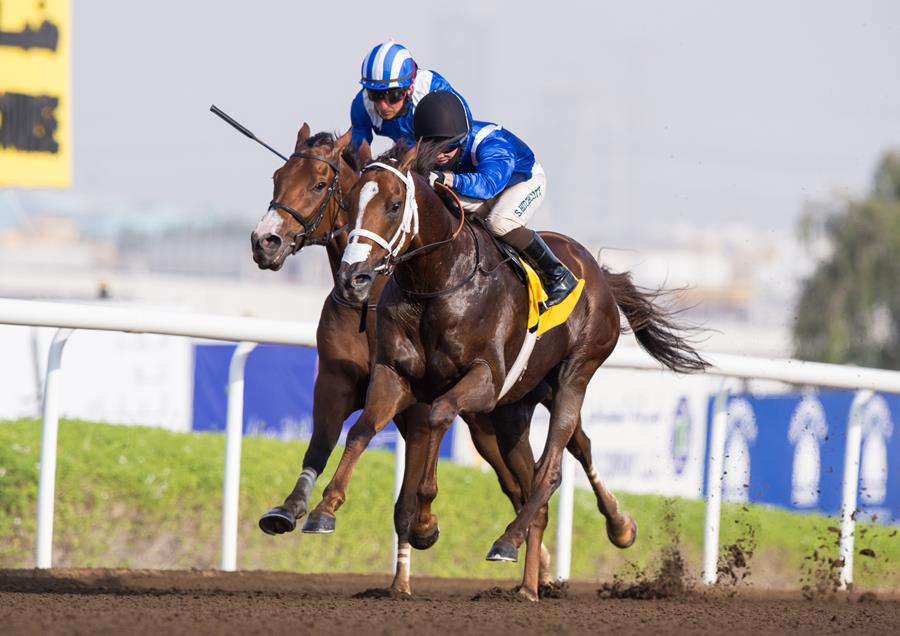 Gabr trained by Doug Watson is a strong contender in the Zabeel Trophy at Meydan on Thursday, picture Dubai Racing Club and Erika Rasmussen