An emphatic winner of his past four outings in Queensland and Sydney over a select range of distances and in a mixture of grades, Zaaki (GB) went into today’s feature as a prohibitive odds-on favourite with betting agencies yet still with a few questions to answer for a diminishing group of form students.

Just under 1 minute and 50 seconds after the jump, even the biggest doubters of the import’s bona fides had squarely been put in their place, prepared to concede that the 7-year-old son of Brazilian sire Leroidesanimaux might just be the genuine weight-for-age middle-distance star he's looked to be since his impressive series of wins got underway in May.

A time honoured contest which lost absolutely no gloss from being transferred to Sandown for this year’s renewal, the Underwood lived right up to its billing despite attracting just five runners.

Quick to begin and ridden forward by new Victorian-based partner Craig Williams, Zaaki (GB) was never worse than second at any stage of the contest and ended up pretty much in the vanguard from the time the field headed for home.

Zaaki’s finishing burst and ease in winning was nothing local racing fans hadn’t seen before, but on this occasion it was a couple of outstanding performers at the top of their game outclassed in second and third.

Kiwi super mare Probabeel (NZ) (by Savabeel) was ridden to prove highly competitive but wasn’t able to lay a glove on the brilliant winner when claiming second.

Last start Feehan Stakes winner Superstorm (by Sebring) came home next in third, having been hard ridden from a long-way out, never appearing likely to get close enough to Zaaki (GB) to prove a threat.

The Chosen One (NZ) was beaten over six lengths into fourth, while Fifty Stars (Ire) tried to make all the running but ultimately crossed the line close to 20 lengths in arrears of the winner — a horse which didn’t appear fully extended to salute. 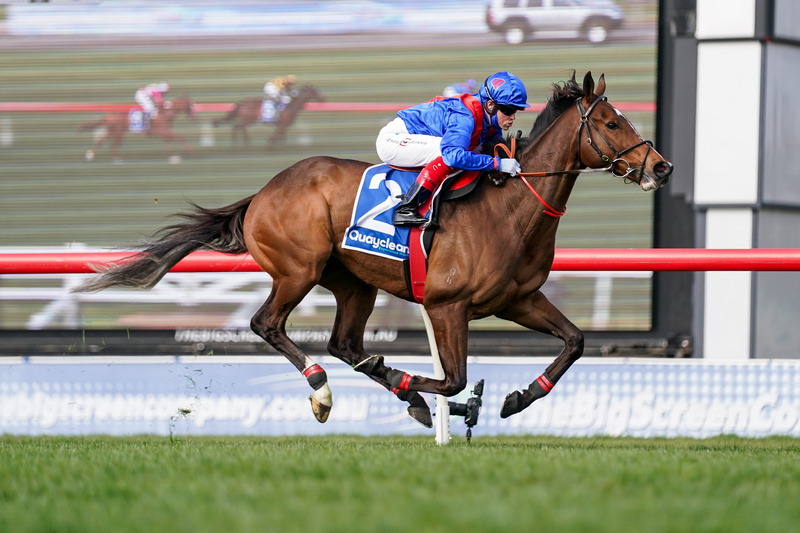 In typical Craig Williams fashion, the winning jockey was wax lyrical about his newfound best friend.

Williams remarked in part: “…thank you to Annabel [Neasham] and the ownership for entrusting me with the ride.

“I just love the preparation, the planning that Annabel has got for Zaaki. Not only am I blessed to ride him but great to see him in Victoria for the three Group 1s. The target is the Cox Plate and I would say after his gallop and today that Annabel has got this horse right where she wants him for his main target to be in two more starts.”

Williams continued: “Oh, he’s good. The thing for me, what makes him feel so good, is that I think that he reads his form and he knows he’s good. He pumps his chest up and the jockey gets on when it comes to raceday … he’s a real racehorse.

“In the morning on his own he just floats around. Obviously he covers the ground that well — he’s that athletic — that you don’t actually realise what he’s doing to his opposition. Probabeel, the four that lined up today, they’re all Group 1 winners. He’s really exciting and I’m grateful for the opportunity.”

Speaking on behalf of Annabel Neasham, stable representative Todd Pollard was just as excited as Williams by what had just taken place.

“Outstanding! Quite nerve racking going into this,” Pollard claimed. “You wait two weeks and then it ends up being a five horse field… odds-on favourite and the pressure was really on. Once the saddle was on and he perks up a bit, it’s just good to see him out there and doing his business.

“There’s been a lot of work that has gone into it. He came down on Sunday night. Nick Ryan, he’s been a huge asset to us. He’s been extra helpful and done everything we could possibly ask.”

In terms of the race itself, Pollard observed: “It was good. It was always going to be a concern, a bit of a tactical affair. There wasn’t a lot of speed in the race and it was interesting to see Fifty Stars take them up. We thought we might have to do all the leg work and have something come over the top of us late. He’s such a good horse, he just tries every time. He’s a marvel to have in the stable.”

“[It’s now] Onto the Caulfield Stakes, then the Cox Plate. That’s the grand final. It’s pretty exciting. He’s two-from-two this prep. You talk about the Cox Plate being the grand final, but when he’s winning first-up over 1400m and doing it again second-up, we just want to see him keep the ball rolling.”

Zaaki scored by two lengths, with Probabeel finishing a length and three-quarters ahead of Superstorm. Winning time was 1:48.20.

Illustrating pre-race expectations is the fact that Zaaki was returned at $1.18 favourite, Probabeel at $7.50, and Superstorm at $21.00.

Thoughts on the win? pic.twitter.com/WTrSOORXkm