Snap Fit won his first three starts, all at Happy Valley, before his unbeaten streak was halted by the runaway Winning Method last time out. Highly Proactive, on the other hand, got off the mark last start at his third attempt, when his wide, on-pace performance impressed jockey Karis Teetan.

“It was a very tough win from the outside gate,” Teetan said. “I think he worked all the way around until the 650-metre mark, then once he caught his breath he kicked on nicely in the straight and won a tough race. Not many horses would have done that, so I’m very pleased with that win.

“His win surprised me, I thought that once he did that much work it would have been difficult for him but he has a little bit of quality about him, he’s only a young horse with a few runs under his belt but he finished off nicely and he won a good race.

“He’s shown a lot since the day he got here so let’s hope he keeps going,” he added.

The four-year-old was unbeaten in two New Zealand races before arriving in Hong Kong. The gelding was sourced by trainer Francis Lui’s retired former stable apprentice Kei Chiong and the handler has been impressed by his progress since that last-start win.

“He looks like he’s improved a bit, he’s more mature and before they always said he was immature but he’s showing that improvement. He has a better draw this time and Karis has been happy with him,” Lui said.

Highly Proactive’s task won’t be easy though, with the Caspar Fownes-trained Snap Fit out to thwart him while also attempting to bounce back from his only defeat so far last month.

Hong Kong’s champion jockey Zac Purton has been in the plate for each of Snap Fit’s starts but Joao Moreira will take over riding duties this week as the Australian finishes serving a two-meeting suspension.

“He’s a very nice horse, Caspar seems to be very confident in his ability and his potential as an individual. I like him, having seen what I have, and hopefully Caspar is right about his ability because he seems to be a nice horse,” Moreira said. 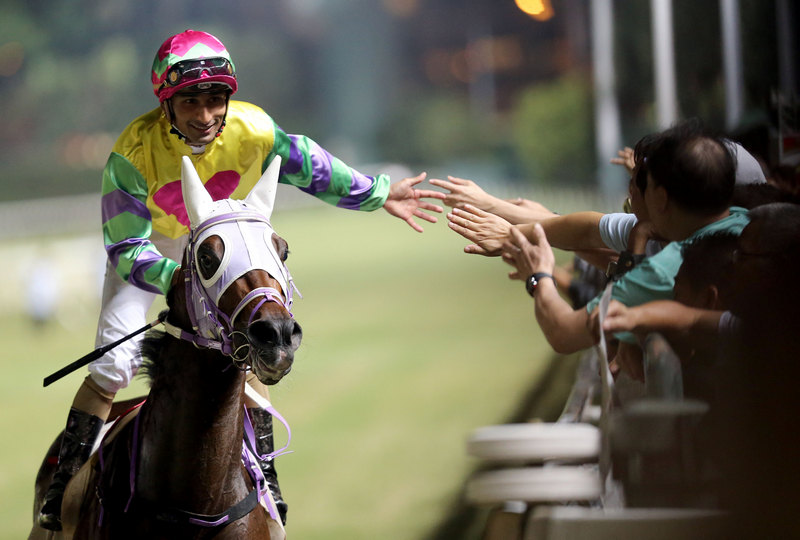 Teetan will reunite with another last-start winner on Wednesday’s card when he partners Flying Genius (121lb) in the Class 3 Connaught Handicap (1000m). The Tony Cruz-trained gelding is looking to remain unbeaten at the Valley as he attempts to secure a hat-trick at only his fourth appearance.

The All Too Hard gelding has shot 16 points up the ratings since his first win at the city course back in December. That was on International Jockeys’ Championship night with Ryan Moore in the plate and he followed that score when making all from barrier 12 under Teetan.

“I wasn’t surprised as his win before that was very good. He’s a horse with a little bit of speed, he can cross the field and I think he’s a decent little horse,” Teetan said.

The Australian-bred three-year-old faces the difficult task of Class 3 for the first time.

“He’s got a good draw, he’s got good speed. I don’t think we’ll be changing his habits and let’s hope he can do it again,” the 29 year-old said.

“He’s shown his quality in Class 4 carrying big weights, so you’d think now going into Class 3 with his speed (he’d cope) and he also handles the Valley well.”

His challengers include the Richard Gibson-trained Heart Conquered (133lb), who steps out for the second time in Hong Kong following a debut third behind Voyage Warrior over 1000m at Sha Tin.

“He’s a good physical; he’s just like his dad, he’s a strong-bodied horse, and he has plenty of speed,” Gibson said.

“He’s a very straightforward horse – he’s pretty bulletproof, to be honest. He had the ability in Australia and it was good to see him run well on debut here.”

Heart Conquered won five times in Australia across three states when under the care of Michael, Wayne & John Hawkes. He won at Morphettville as a juvenile before advancing further at three to win at Ballarat, Kensington and twice at Warwick Farm. The gelding closed out his career Down Under with a fifth-place finish in the G3 John Monash Stakes at Caulfield (1100m).

“I think he’s probably better on a turn; the race has probably come up a bit quick for us, it’s the way the programme goes, but he goes there in good form and he’s drawn a gate so he’ll have a decent shout,” his handler said.

“I’m still learning about the horse but at the moment I’d prefer to put him over 1000 (metres) and that’s why we’ve chosen this race.”