Young can afford to Dream longer

After one unsuccessful attempt, My Dreamliner is having another go at coming out of the short sprint square this Friday at Krnaji with connections slightly more upbeat of a better outcome this time.

The speed merchant ran over six furlongs only once. It was at his only test on turf in a Kranji Stakes C race last March when he led, as is his pattern, but was swamped late to run fourth to Nimble, only just over one length off.

In eight other starts, the Dream Ahead four-year-old has been restricted solely to 1000m and 1100m speed scampers, with six wins and one second clearly underscoring his proclivity for the all-weather. 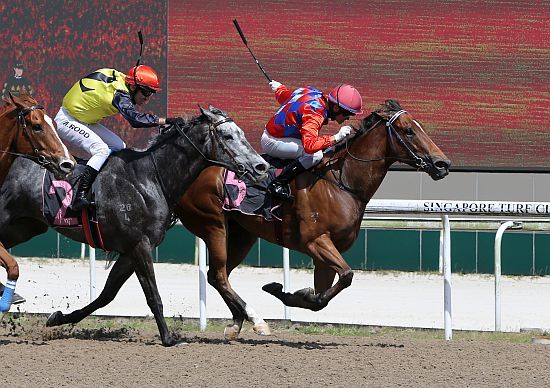 Trainer Young Keah Yong is having another throw of the dice rising the distance for the Tang Weng Fei-owned galloper, with the extra task of taking on the big boys in the $100,000 Class 1 Polytrack race not lost on him.

The Singaporean handler said My Dreamliner’s strongest asset was his high-cruising speed, but with more racing experience under his belt, he felt the time has come to get him out of his comfort zone.

“I did say at his last win (Kranji Stakes A race over 1100m on February 29) that I would like to rise him in distance next,” said Young.

“I feel he races more relaxed now, and has strengthened up. He’s ready to take a rise in distance.

“Besides, there aren’t many races now. This race has come up and he will also get in at a light weight (52.5kgs).

“The horse is in good order, and I think he can run well. We’ve got to try.”

With most of the jockeys who have ridden My Dreamliner being stuck in Johor Bahru because of the Covid-19 travel restrictions across the Causeway, Young had to look elsewhere for a new partner.

“I’ve booked Ruan Maia as Benny, CC (Wong Chin Chuen) and Iskandar (Rosman) are all in Malaysia and can’t come over. Ruan is a good jockey and can ride fairly light.”

Young said while he had My Dreamliner prepped up to the minute for this race, he was not expecting the opposition to be giving him an easy time. Resuming 2019 Singapore Horse of the Year I’m Incredible was for one a big hurdle in his way, not to mention other worthy opponents like Skywalk, Nowyousee and Gingerella.

“It’s a tough field he is taking on. I’m not overly confident he can measure up,” said Young.

“Fingers crossed, he can run a good race. I hope he draws a good barrier, as that would really help his chances.”