On Sunday, June 2 and coming on the heels off a longshot victory in the Japanese Derby is the final big event at Tokyo until the autumn – the Grade 1 Yasuda Kinen, a mile turf event for horses 3 years old and up. The Yasuda Kinen is one of two races key to determine the year’s top miler. Often joined by raiders from abroad, this year’s running has no foreign-based runners, but it makes up for international flare and then some with the presence of the globe-trotting super filly Almond Eye.

Almond Eye was unanimously named 2018 Horse of the Year (and Best 3-Year-Old Filly) and is racing in Japan for the first time this year, back from victory in Dubai. Joining her will be regular rider Christophe Lemaire, who returns from a suspension that has knocked him out of the action for the last three weeks at the height of the spring campaign.

Five-time Grade 1 champion Almond Eye will be the overwhelming favorite on Sunday, but she’ll be joined by 16 others looking to end her seven-race winning streak and bring home the 110 million yen winner’s prize. Six Grade 1 winners are among them, with the 4-year-old colt Danon Premium and the 5-year-old mare Aerolithe considered among those having a shot at beating Almond Eye to the finish line.

The Yasuda Kinen began in 1951 as the Yasuda Sho and was named for the Japan Racing Association’s founding chairman Izaemon Yasuda. Important races leading up to the Yasuda Kinen include the Grade 2 Keio Hai Spring Cup, Grade 3 Lord Derby Challenge Trophy, Grade 2 Yomiuri Milers Cup, and Grade 3 Tokyo Shimbun Hai. The Yasuda lineup will include the winners of all those – respectively, Tower of London, Fiano Romano, Danon Premium, and Indy Champ.

The Tokyo 1,600 turf race starts at the top of the backstretch and continues some 500 meters to the first turn, which allows for ample maneuvering time even for those drawn wide. The track slopes down from the gate, then rises sharply about halfway down the backstretch before dropping around the bend. It rises sharply again from about 450 meters out until leveling with 300 meters to go. The weights for the Yasuda Kinen are set, with colts and horses carrying 58kg, with fillies and mares receiving a 2kg allowance.

The gate on the Yasuda Kinen will open at 15:40 local time and is the 11th race on the Tokyo card of 12. Here’s a look at some of the likely popular picks:

Almond Eye: The 4-year-old filly Almond Eye has captured five Grade 1 races in a row and returns straight from her victory at Meydan in the 1,800-meter Dubai Turf on March 30. It will be her first mile in over a year, since her win of the Oka Sho, but with two other wins at the distance, including her first, which was at Tokyo, there’s little reason to believe Almond Eye can’t win this one too. Last year’s Japan Cup victory in record time shows this girl has the speed to conquer the Tokyo track, which is currently lightning fast. Trainer Sakae Kunieda says she came out of the Dubai race better than she has from her other starts and, after quarantine and time at the farm, returned to Miho refreshed. Lemaire, who rode the Yasuda winner last year, rode track work at Miho on May 22 and all looked well. “She has always surpassed expectations and I’m looking forward to this race as well,” Kunieda said. If Almond Eye (or Aerolithe) aces the Yasuda, she will be the first female to win since Vodka’s victory a decade ago. Almond Eye would also become only the third horse in Japanese racing history to win six G1s back to back. T.M. Opera O was one. The other was Almond Eye’s sire Lord Kanaloa, who won the Yasuda in 2013. Two of the six horses who have returned from Dubai to go straight to the Yasuda have won. 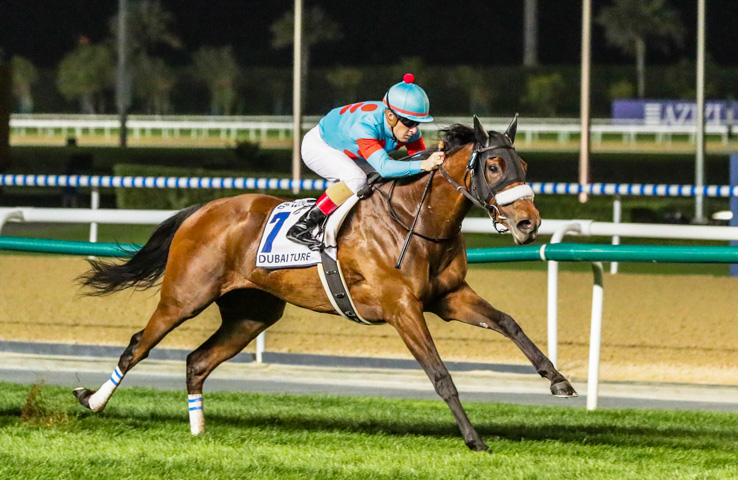 Danon Premium: On the books, the Deep Impact colt Danon Premium matches Almond Eye not only for age but, more importantly, for their 6-for-7 records. Until now, however, the two have never met. The Ritto-based Danon Premium had to sit out the Satsuki Sho (Japanese 2000 Guineas) last year due to a bruised hoof and it most likely was a factor in his only loss, a sixth-place finish in the Japanese Derby (only 0.2 seconds behind the winner). Though his record is not as stellar as Almond Eye’s, it’s nonetheless solid. Winner of the top 2-year-old race, the Asahi Hai Futurity Stakes, Danon Premium also bagged a Grade 3 and three Grade 2 races and is coming off a win of the Yomiuri Milers Cup on April 21. Other than the Derby, his Grade 3 win, the Saudi Arabia Royal Cup, was also run at Tokyo and over a mile. In it, Danon Premium rewrote the 2-year-old course record. He has won all three of his mile bids and in the Yayoi Sho (2,000 meters, G2) last year he beat Wagnerian, who went on to win the Derby. Danon Premium is one of four Deep Impact colts in the Yasuda lineup. Two previous Yasuda winners were by the Triple Crown champ, and this spring’s fast track seems especially suited to Deep Impact progeny. Deep Impact fillies were 1-2 in the Oaks, his colts were 1-2 in the Derby last week.

Aerolithe: Aerolithe, a gray 5-year-old mare by Kurofune, gave jockey-turned-trainer Takanori Kikuzawa his first Grade 1 victory when she captured the NHK Mile Cup in 2017. Since then, her best in her six top-level starts both at home and abroad was her second in this race last year. Last out in the Victoria Mile, she soon reached the front and led the field at a blistering pace that saw her pass the 1,000m mark in 56 seconds. She held her ground until less than 100 meters out, but finished fifth. It was an impressive run, especially considering that it was her first race since returning from the U.S. and her ninth-place finish in the Pegasus World Cup Turf Invitational (1,900 meters, G1). Kikuzawa, who rides her track work himself, said she felt good on May 24, when he clocked her on the flat. “She extended nicely and her movement was good. I’d say she can do well even with the short time between races.” Last year, Aerolithe ran fourth in the Victoria Mile before running second in the Yasuda.

Stelvio: Another Lord Kanaloa runner is the 4-year-old colt Stelvio. His best results have come at the mile, including a second in the Grade 1 Asahi Hai Futurity Stakes as a 2-year-old and a win of the Grade 1 Mile Championship last year. This will be Stelvio’s first Yasuda Kinen and only his second time over the Tokyo mile. His first was in the Saudi Arabia Royal Cup in 2017, when he ran second to Danon Premium. This year, he has had two starts, ending in a third in the 1,800-meter Grade 2 Nakayama Kinen and, after a 12-kg drop in weight, a 14th-place finish in the Grade 1 Osaka Hai (2,000 meters). In the Nakayama Kinen he finished a close third behind the winner Win Bright and runner-up Lucky Lilac, who was racing under 4kg less. A return to the mile and the proximity of the track are pluses.

Indy Champ: This Stay Gold 4-year-old has five wins in nine starts and has made fourth or better in all. All but two have been over the mile. He scooped the Grade 3 Tokyo Shimbun Hai, a mile race at Tokyo, in his first race of the year and then took on the Milers Cup. Impatient with the slow pace in the early stages of that race, he failed to gain ground in the stretch and finished fourth. The higher pace of a Grade 1 should help Indy Champ in his first top-level event.

Mozu Ascot: Mozu Ascot, an American-bred 5-year-old by Frankel, notched his first big victory on his first Grade 1 bid when he won the Yasuda Kinen last year. He had yet to win a graded-stakes race but had finished second in both the Hankyu Hai (1,400, G3) and the Yomiuri Milers Cup (G2). Since then, though, things haven’t gone so swimmingly. Though he did run second in the Swan Stakes (1,400, G2) last fall, his Mile Championship bid ended in a double-digit finish after being interfered turning into the stretch. In Hong Kong, he finished seventh in the Mile and his only start this year, the Yomiuri Milers Cup, saw him finish in seventh again, a full second off the winner.

Also worth a mention are Persian Knight, who was runner-up in the Mile Championship last year and winner of the same in 2017. Sixth here last year, he has had only two 2,000-meter starts this year since returning from Hong Kong. A return to the mile should be a welcome. The 5-year-old Sungrazer finished fifth here last year after winning the Milers Cup in record time. He has had four starts since last year’s Yasuda, all over 2,000 meters and could be an interesting pick. The Kazuo Fujisawa-trained Tower of London, who was third in the Grade 1 Asahi Hai Futurity Stakes last year, is coming off a win of the Keio Hai Spring Cup and could surprise.