The world’s two top jockeys, the evergreen and effervescent Frankie Dettori and Hong Kong’s own Zac Purton, head a stellar cast competing in the 22nd edition of the LONGINES International Jockeys’ Championship at Happy Valley on Wednesday night.

Dettori and Purton sit one-two on the current LONGINES World’s Best Jockey rankings and they’re joined in pursuit of the HK$500,000 IJC prize by another 10 of racing’s most outstanding jockeys, including Oisin Murphy and Ryan Moore who finished second and third respectively, behind Dettori, in the 2018 official IFHA (International Federation of Horseracing Authorities) rankings.

The 49 year-old Dettori, who has enjoyed a career-best year with 19 Group 1 wins at an astonishing strike rate of 35.8%, summed up the view of all competitors when he said: “Just look at this line-up of amazing jockeys, it is a privilege to be asked to compete again.”

Dettori, three times IJC champion, is eagerly awaiting his first rides in Hong Kong since 2011when he last claimed the title.

“It’s really exciting to be back. It’s a great atmosphere at Happy Valley and this series is always challenging taking on the best around this unique track,” he said.

Many of his rivals are experienced at Hong Kong’s city circuit and boast past IJC wins, with two championships to Moore and one to Purton, Moreira and de Sousa.

In contrast, Kawada rides at Happy Valley for the first time.

“I’m honoured to join the IJC with all the world’s top jockeys. The line-up is so amazing. This is my first time to ride at this sharp and tricky course but I will do my best,” said Kawada, who is one only of nine jockeys in Japan to have won all five classic races.

Teetan appears to have a good book of rides, most of which are well drawn.

“I can say it’s nice to go into the competition with some chance,” he said. “I think I learned a lot from my two previous IJC appearances and it’s great to ride here in Hong Kong and get the opportunity to go again in the IJC.”

Teetan, who is currently third in the Hong Kong jockeys’ premiership, named G Unit (race four) and High Rev (race eight) as “the two who stand out” among his book.

Irish-born Murphy said he was looking forward to the competition. “I’ll be studying the races tonight and watching the videos. I’m glad to be back here. I first came in 2016 and I’ve been back each year since. I’ve learned a lot here watching guys like Zac (Purton) and Joao (Moreira),” he said.

De Sousa, who won last year with a record tally of points, said he was “feeling a lot of pressure” this year. “There’s a lot of superstars here. I’m just proud and happy to be a part of it and I just hope I get lucky,” he said.

The four-race IJC is part of a nine-race card at the Valley, which starts at 6.30pm. The first IJC race is the fourth on the programme, the Class 4 LONGINES International Jockeys’ Championship Handicap - 1st Leg (1000m) at 8.10pm. 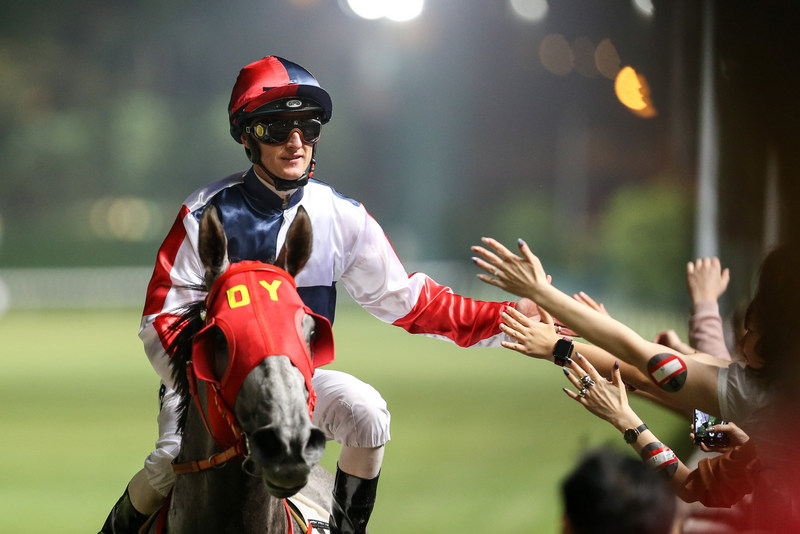