Woodworth to ride for Levar's The Racing Club

After a first sit on Sunday, Benny Woodworth will get to keep his seat on top galloper King Louis in the $1 million Group 1 Kranji Mile on August 16 – and beyond.

Last year’s champion local jockey steered the son of Medaglia d’Oro to a solid second place to surprise winner Passport To Rome in the Class 1 race over 1400m on Sunday. It was his first time riding the Ricardo Le Grange-trained galloper.

Woodworth is being anointed as the new partner to not just King Louis, but also his stablemates and last-start winners Churchill and Sweet Angeline. The trio of horses are raced by Steve Levar’s The Racing Club (TRC) Stable. 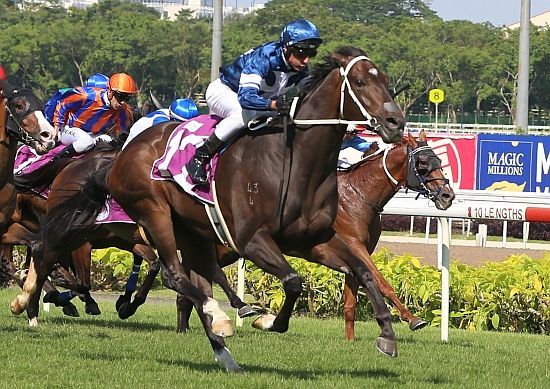 The iRACE supremo explained he inked the package deal with Woodworth given that Singapore champion jockey Vlad Duric had become in even higher demand than he already was before COVID-19.

Four expatriate jockeys returned home in the wake of the Circuit Breaker-induced three-month racing suspension, narrowing down the options when top jockeys are needed. Woodworth himself was stranded in Johor Bahru and only managed to re-enter Singapore when the restrictions were eased.

"Vlad is in a very difficult position and simply cannot ride everything, so we have decided to take matters into our own hands and have booked Benny Woodworth to ride all three of our horses," said Levar who often put Duric on his horses.

“We are very excited to secure the services of Benny who is clearly one of the best jockeys riding in Singapore.

“With Duric being offered the ride on almost every horse at Kranji, the TRC Stable has also booked Benny to ride unbeaten filly Sweet Angeline in the Group 2 Singapore Classic (1400m on August 30) and the Group 1 Singapore Guineas (1600m on September 26).

“All three of The Racing Club horses will compete in most of the major races over the next few months.”

Even if King Louis did not score at his first partnership with Woodworth on Sunday, it is clear that first trial was the acid test Levar needed, with the resulting decision to sign him not coming as a surprise.

“King Louis ran a cracking race fresh-up over 1400m with Benny having his first sit, and that run will see him strip much fitter for the 1600m of the Kranji Mile, he appears back to his best form,” said Levar.

“Ricardo and his team have done a great job with the multiple Group 1 placegetter and he will also target the Singapore Triple Crown series again this year.

“Churchill (x Smart Missile and known as Front Sight in Australia) was simply awesome first-up winning over an unsuitable 1200m and he is a horse we believe can play a major part in the Derby.

“During the break, he matured and developed into a real racehorse. He has returned post-Circuit Breaker a much better horse with the best to come once he gets back up in distance.

“We purchased Sweet Angeline (x Rubick) from Australia specifically for the Guineas after she ran (as Chia) in the Group 1 Champagne Stakes over 1600m at Randwick. We are very excited to finally get her onto the turf next start in the Classic and up to a more suitable 1400m distance, we have very high expectations of her.”

Woodworth, who has won one race (Admiral Winston, Lim’s Passion and Savvy Command) per meeting since Kranji was reopened on July 11, and has steadily moved into the Top Five, said he was honoured he was hand-picked by Levar for the job.

“I’m very happy to ride for Steve. I didn’t have any ride in the Kranji Mile, and he also has some very nice new young horses on the up,” said Woodworth who sits in fifth place on the log on 15 winners, 21 behind Duric.

“So far, I’ve only ridden King Louis, and that was yesterday. The run was good but at the same time, there was a track bias for frontrunners.

“The backmarkers didn’t make ground. It was not a true run race, but he still ran very well.”