Winning Spirit is back as Kuah saddles first quinella

The former Singaporean jockey, just like virtually every Kranji racing fan who’ve done their forms, had been swept up in the hoopla about Jason Lim’s debutant Crystal Warrior, the short-priced favourite.

The I Am Invincible three-year-old had been spruiked as a near-certainty on the strength of his two dominant barrier trial wins, fuelled further by a Group 3 third in Sydney (when known as I Am Swerving for the powerful Team Hawkes) considering his Kranji debut was coming in a $50,000 Class 4 race over 1100m. 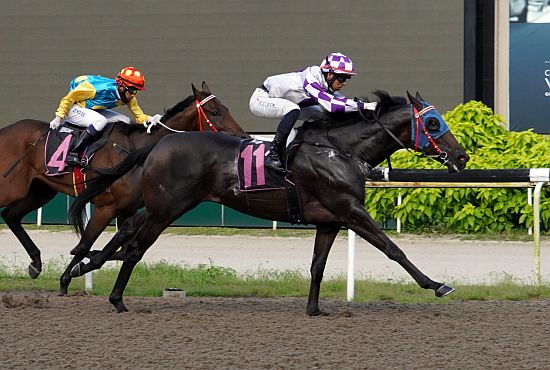 But deep down, Kuah had not entirely given up on a boilover from either one of his duo should the hotpot fail to live up to the hype – after all, Kranji has often proved a graveyard to such newcomers with Rolls Royce-esque resume in the past.

The early stages wouldn’t have given the favourite backers any great cause for concern when jockey Danny Beasley was seen not spending a penny after effortlessly launching Crystal Warrior to the top of the heap from the inside gate.

Kuah’s last-start winner Sky Eye (Zyrul Nor Azman), who also broke from a handy barrier (two), camped on Crystal Warrior’s girth, arguably to both keep close tabs and put a cheap run out of the equation.

To the naked eye, it didn’t appear Sky Eye had burned the candle at both ends, but Crystal Warrior was still not finding like a $8 favourite halfway up the straight.

If anything, he went out without so much as a whimper when the Kuah double-barrelled attack came collaring him at the 150m. Against all odds, Kuah saw his secret script come to fruition, but it turned out to be Winning Spirit (Yusoff Fadzli), who all along had been lurking in the shadows a couple of strides astern, who produced the better finish.

Kuah’s leading hope didn’t shirk a fight, but also faltered a smidgen towards the business end. It didn’t matter as it was his own stablemate who snared the thicker end of the prizemoney.

Winning Spirit ($42) got up to defeat Sky Eye by one and a quarter lengths with Crystal Warrior having to settle for third place another 1 ½ lengths away, which was still a laudable effort from which he can only benefit moving forward.

A one-time winner by US sire Itsmyluckyday and a placegetter four times at his previous 12 starts, Winning Spirit showed he was indeed blessed with the drive his name evokes with that second victory. The four-year-old bay brown has now amassed more than $70,000 for his owner-trainer Kuah.

“We all thought Jason’s horse would be hard to beat, but both my horses had a light weight,” said Kuah.

“Winning Spirit had an outside draw. He led when he won and he also led last time out, but I told Yusoff, you know the horse well now, and he should go forward, but to take a sit as we know Jason’s horse is fast and would probably lead.

“In the straight, my two horses kept going, and I’m really happy with both of them. Sky Eye has been on the board twice in three starts for me.

“They actually gave me my first forecast (name given to a quinella in Singapore) as a trainer (in six seasons). I didn’t have time to go for the forecast – wasted, but it’s still a big thrill.

“I bought Winning Spirit in the States myself and I always felt he had ability, but he was too young and was still learning.

“I remember the guy who sold him told me he could handle both turf and dirt, but he seems to be more of a Polytrack horse here.”

After a halting start, Kuah’s 2021 season has been gaining traction of late, even if the winners hail mostly from the lower divisions. From a record of two winners barely two months ago, he has sling shot to seven winners for a score which has already bettered last year’s paltry five winners, but which is still some way off his career best record of 24 winners at his second season in 2017.