Williams delivers a first aboard Cataracta

Damian Lane remarked late on Saturday that if the Victorian Metropolitan Jockeys' Premiership battle wasn't at the back of his mind before Finals Day, it certainly was after Craig Williams' Flemington domination.

If he needed a reminder of Williams' determination to win a seventh Roy Higgins Medal, it came early in Wednesday's Sandown card. 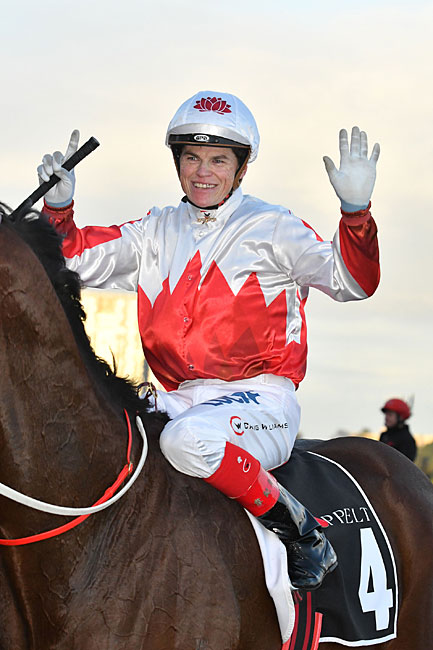 Williams, who entered the meeting with a nine-win lead over Lane after a record six winners at Flemington, struck an early blow when he won the second race aboard the Ciaron Maher-trained Cataracta.

Rubbing it right in was that the Lane-ridden Can Star was the horse Williams held a short-half-head margin over at the line.

"This is a winner for my manager (Jason Breen)," Williams said. "He targeted this horse for a maiden.

"We had a couple that we had picked out and he just really liked this horse.

"We rang up Ciaron and he was just not 100 per cent sure he was always going to run because of the quick turnaround from the first to her second run, but once he saw that she'd really come on she had to run.

"I'm glad he did, because it was a great duel with Damian Lane."

The performance underlined the talent of Cataracta, who backed up a narrow second placing at her first start to land maiden victory at start number two.

It was a milestone victory of sorts, with the three-year-old carrying the turquoise, black and white colours of new syndication company Harney Stone Racing.

Cataracta is the first horse for the Warrnambool-based group and many of those involved made the trip to Sandown and celebrated accordingly.

Stephen Harney said the daughter of Niagara was bought from New Zealand off the back of an impressive trial and said that was the model his company would work off initially.

"We want fillies who can get out over ground over time," Harney said.

"We got her from New Zealand, where she'd won her trial very impressively, by about three lengths eased up, and we put her on the market and within two weeks she was snapped up.

"We're currently circling the waters over in New Zealand at the moment, we've got a couple of big things going to happen over the next months, so fingers crossed we can launch them and be on our way.

"This is a great start, though."

Not content with a 10-win premiership lead, Williams extended his advantage to 11 in the following race aboard highly-promising Savabeel gelding Gold Mag, although Lane got in the winner's circle aboard Thunder Cloud in Race 4, which also gave Darren Weir a double.

Three-year-old Gold Mag made it two dominant wins to start his career when he followed up his four-and-three-quarter-length debut victory at Bendigo with a five-length win in the 1200-metre Le Pine Funerals 3YO Handicap.

"He still didn't know anything about what he was doing, but he's got a big motor and plenty of raw ability," Williams said.

"He'll be winning more races, that's for sure."