Group 1 action returns this Sunday to Sha Tin with a pair of top-level contests, highlighted by the reappearance of Golden Sixty as well as a hot renewal of the Centenary Sprint Cup (1200m) which Alexis Badel is gunning for aboard Wellington.

Victorious in the 2021 HK$18 million G1 Chairman’s Sprint Prize (1200m) on FWD Champions Day, Wellington has since had a challenging start to the new season, suffering a slight niggle in October before an accident-marred 2021 G1 LONGINES Hong Kong Sprint (1200m) all but dashed his chances of a second top-level crown.

But third-up now and off the back of a smart first-past-the-post trial effort earlier this month, Badel is buoyant of reward for the All Too Hard gelding this weekend.

“Last start there was an excuse with the accident, so hopefully we can come back from that with a fresh start and see his true potential. I think if he returns and does what he can do best, then he should be one of the best sprinters in Hong Kong,” Badel said. 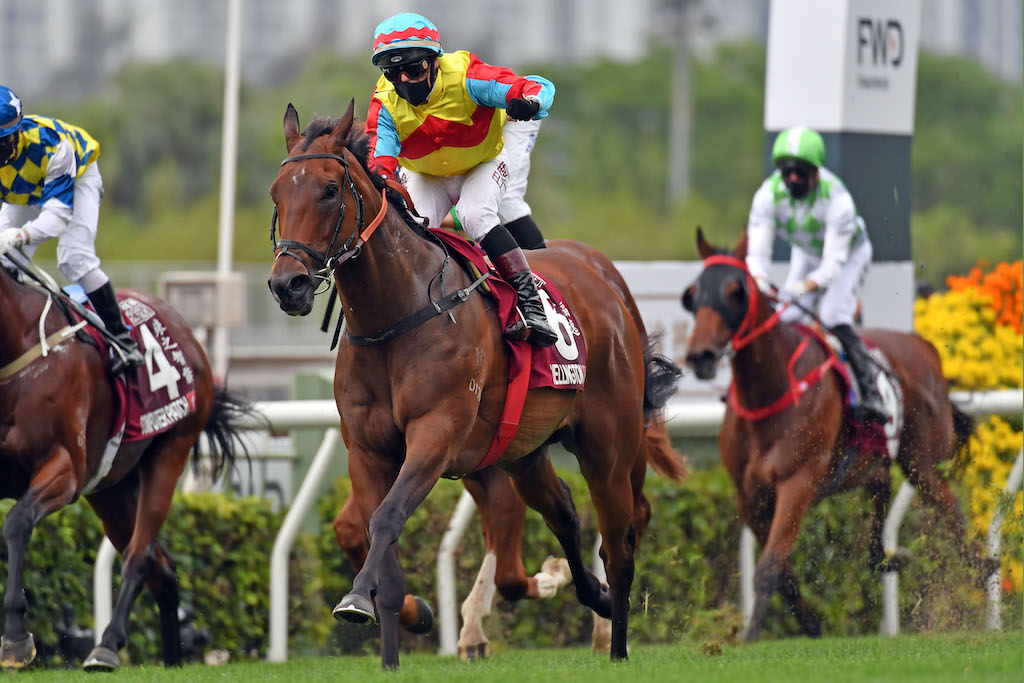 The five-year-old — sporting cheek pieces for the first time — bounced to the front in his trial, clocking 59.20s for the 1000m gallop ahead of Jumbo Fortune and Golden Sixty, respectively.

“The trial was good. We didn’t have any pressure … and we controlled the pace. He seems alright and the cheek pieces were very useful to me. It seemed like he was in a straight line and that he didn’t look around too much,” Badel said.

The bay boasts seven wins from 12 starts in Hong Kong and HK$18.42 million banked for connections and his handler, Richard Gibson.

“This is only his third run for the season. I think the second one was a target, but because of the accident we had a lot of excuses. So this race will be a big test. He seems to be fresh and improving — I can’t see any reasons why he won’t run well,” Badel said.

Master Eight, unbeaten across five starts, makes the daunting rise to the top-level for the first time, while Hot King Prawn looks to defend his crown in the race and give John Size his fifth Centenary Sprint Cup in succession. Size is also represented by Courier Wonder, third to Sky Field in the LONGINES Hong Kong Sprint.

The Stewards’ Cup (1600m) is the afternoon’s other G1 contest and features Golden Sixty, who is bidding to equal Silent Witness’ Hong Kong record of 17 consecutive wins.

Badel also rides Healthy Happy in the Stewards’ Cup, while he has also committed to partner Fa Fa in the HK$12 million Hong Kong Classic Mile (1600m) on Sunday, 30 January at Sha Tin.

Fa Fa has been one of this season’s success stories with four wins from four runs — one of only two runners to do so with the other being Romantic Warrior, a fellow four-year-old.

The Frankie Lor-trainee boasts six wins at Happy Valley and returns to Sha Tin for the first time since finishing sixth in April, 2021. Rated 48 seven runs ago, the New Zealand-bred has enjoyed a meteoric rise of 40 rating points since capturing his first win in Hong Kong and catapulting himself into contention for the HK$48 million Four-Year-Old Classic Series.