THE spoils were shared on Saturday as Sydney racing headed to the greater west for an outstanding Hawkesbury Guineas meeting. Nine races were won by nine different stables whilst Josh Parr bagged a winning treble.

OPACITY – Finished eighth of 12 in the final event on the program but this was a disguised performance so hopefully we get some value next start. Looked to be travelling strongly as they swung of home in the 1300m affair, but the runs didn’t come with apprentice jockey Campbell Rawiller forced to check on numerous occasions. John O’Shea’s four-year-old officially beaten 3.3 lengths but can improve sharply next time out.

LUNCIES – I don’t make a habit of following last-start winners but will make an exception here. Kris Lees’ imported four-year-old was only having his second run in Australia and charged through the line to win over 1800m. Has acclimatised quickly to the Australian scene and will only get better over more ground. Punters should have some fun following this fellow.

DON’TFORGETMONICA – Didn’t have much luck at all in the TAB Highway (1400m) when fourth behind GOLDEN GORGE. Bailed-up along the fence and tight for room most of the straight, Cameron Crockett’s mare did well to get within one length of the winner. Lightly raced with plenty of options, keep an eye out for wherever she turns up next.

ATHIRI – The inside gate proved the undoing for James Cummings’ well-fancied Lonhro mare in the Hawkesbury Crown (1300m). Josh Parr found himself a touch further back than expected due to a surprisingly fast tempo, but the real trouble came in the straight when Athiri just couldn’t get a clear shot at them. Finished tenth but this was a total forgive run.

BLACK DUKE – Outstanding effort in the Hawkesbury Guineas (1400m). Raced very tight for much of the straight. Copped a severe check inside the final 100m yet still managed to pick himself up again and snare third prize right on the line. Has had a long campaign so not sure what’s next, but certainly should have gone close to winning.

JOSH Parr booted home three winners and they were all terrific rides. Parr’s steer aboard Luncies earned the runner-up award but Nash Rawiller’s piloting of SWEET DEAL to take out the Hawkesbury Crown (1300m) gets the nod. Rawiller was content to settle further back than anticipated with surprise pace injected early. Had to use some force to extricate at the top of the straight but once balanced it was all over. Super ride.

THE Hawkesbury Big6 and Quaddie were looking quite gettable up until the final race on the program. $34 pop IMPASSE blew most punters out of the water but those that stuck solid with Tony Brassel’s value bet could have won big! The Big6 paid a whopping $145,113 whilst the Quaddie tipped in at $19,707.70 on the NSW TAB.

1-TEAM Hawkes have now won three of the past four editions of the Hawkesbury Gold Cup. ARCHEDEMUS won on the weekend but can you name their other two winners? For a bonus point can you also name their 2014 winner?

2-NASH Rawiller scored his second success in the Hawkesbury Crown (1300m) aboard SWEET DEAL. Can you name his other winning ride from 2012 – hint – she was trained by Gai Waterhouse?
Answers below.

TWO suspensions out of the Hawkesbury meeting with Sam Clipperton copping two weeks for causing interference aboard his winning mount EXOBOOM in the Hawkesbury Guineas. Clipperton will be out of action from May 9 to May 23. Nash Rawiller also earned the ire of stewards, given a six-day sentence for causing interference aboard VITESSE in the final race on the card. Rawiller won’t miss a Saturday meeting. INANUP pulled-up 2/5 lame from the Hawkesbury Rush (1100m) and will require a vet certificate before being allowed to race again.

PERFECT weather and a Good 4 surface greeted punters with the Hawkesbury circuit coming through with flying colours. Horses ran time and well-judged rides were rewarded. 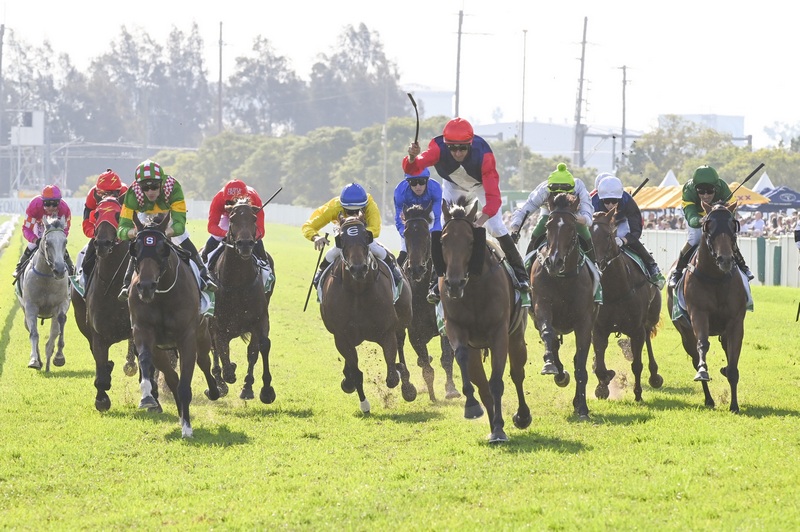 Nash Rawiller salutes the ride of the day, picture Stevehart.com.au