HUNGRY HEART gobbled up the ground late to win a thrilling Vinery Stud Stakes (2000m) whilst big-race jockey Glen Boss produced a peach aboard SIR DRAGONET to take out the Tancred Stakes (2400m) at Rosehill Gardens on Saturday.

GIN MARTINI – A slow start made the task impossible for this John Sargent-trained $61 pop in the G3 Schweppervescence Stakes (1400m). Jockey Regan Bayliss had little option but to ride quietly and save ground turning for home. The flashy daughter of Rip Van Winkle really began to build up steam late, clocking the fastest final 200m of the race at 11.60 secs – finishing third. A knockout hope if she progresses to the Champagne Stakes (1600m).

QUANTUM MECHANIC – Mick Price and Michael Kent Jnr produced a consistent mare in the G2 Emancipation Stakes (1500m) but early in the program the track was favouring those near the speed and near the fence. Josh Parr positioned the daughter of Deep Field perfectly in the run but had to angle five wide into the straight. Motored home in the fastest final 200m split (11.61 secs) of the race, finishing third and getting within a length of the winner. Huge run.

NUDGE – Two runs this campaign for two enormous performances. Drew 13 of 13 in the final race on the card, a  Benchmark 88 over 1400m. Settled a long way back before hooking widest on the turn. The on pace duo of STARSPANGLED RODEO and GREAT NEWS fought out the finish with Chris Waller’s Fastnet Rock mare screaming into third place. Final splits of 34.08 (final 600m) and 11.70 (final 200m) backing-up what the eyes were seeing. Surely the breaks fall her way next time.

DEPRIVE – The blinkers went on first time for this James Cummings-trained six-year-old and from a wide gate was restrained to settle last. Rachel King saved ground into the straight but needed a miracle opening to develop. The son of Denman was working up a full head of steam but struck serious traffic issues inside the final 125m – hard held through the line finishing an unlucky seventh.

BRANDENBURG – Perhaps being too forgiving in this case but a 12th of 12 in the formguide may provide some big odds next time out. John Sargent’s recently gelded four-year-old resumed in the Star Kingdom Stakes (1200m) and off a wide gate was always likely to find them too slick. And he did. But a final 200m split of 11.49 secs was the third quickest of the race behind DEPRIVE/ROHERYN and was reported post-race to have pulled-up 1/5 lame. Can improve sharply second-up over more ground.

ROYAL CELEBRATION – Resumed with 62.5kg in the Benchmark 88 (1400m) and a final result reading 9th of 13 beaten five lengths won’t impress too many. But the run was much better than it reads in the formguide. Settled midfield on the fence but when Andrew Adkins went looking for runs at the top of the straight all he found were dead-ends. Never tested at any stage and looked a total forgive run.

Big-time ‘Bossy’ earns the award this week with a perfectly judged high-pressure steer aboard favourite SIR DRAGONET in the Tancred Stakes (2400m). Barrier one certainly helped the cause but Boss managed to conserve as much energy as possible before deciding to come away from the fence approaching the 600m. By the time they had straightened, SIR DRAGONET was chiming in four wide with a full head of steam.

1) It’s been 10 years since Gai Waterhouse won a Tulloch Stakes. Can you name her 2011 winner?

A quiet day in the Stewards Room with no rider suspensions. Vet certificates will be required before KRONE (1/5 lame) and BRANDENBURG (2/5 lame) are allowed to race again whilst CORUSCATE was issued a lifetime Australian ban after bleeding for the second time.

With five of the nine winners starting from barrier 1 it doesn’t take a genius to work out the fence was the place to be. The rail was out 6 metres and the track raced a Good 4.

Day One of The Championships from Royal Randwick next Saturday with four Group One races amongst the nine-race program. The Doncaster Mile (1600m), TJ Smith Stakes (1200m), Australian Derby (2400m) and Inglis Sires (1400m) make up the big four whilst the Newhaven Park Country Championships Final (1400m) is always a much anticipated event. 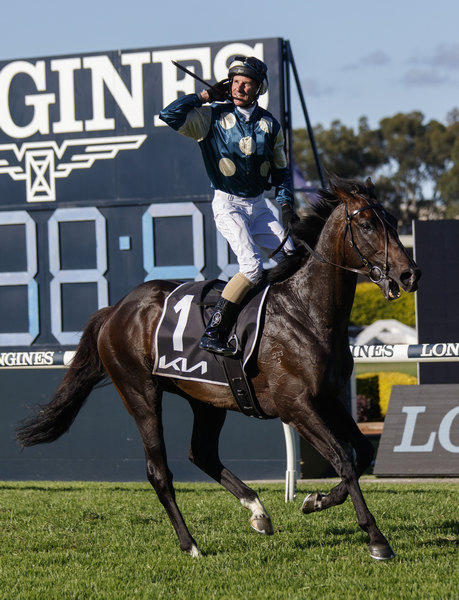