Webster back in the groove

Webster confirmed his sudden form resurgence with a hard-fought win in the $85,000 Class 2 race over 1100m at Kranji on Saturday.

The winning odds of $36 certainly suggested that a last-start closing third in a Kranji Stakes A race over 1200m following a string of poor runs was strong grounds for renewed faith in the Showcasing seven-year-old.

However, trainer Daniel Meagher still wanted to see it to believe it, especially as there were a few odds stacked against the ageing galloper. 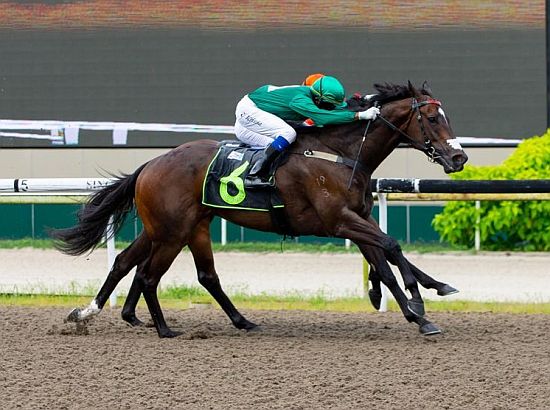 The will to win appears to have dwindled in the 28 months and 18 winless starts since Webster’s last win, not to mention two knee operations to patch him up, and last but not least, the concerns on Saturday about a drop back in distance to a sharp Polytrack speed dash didn’t lend to much optimism.

All these worries were soon allayed after Webster showed plenty of ticker from the word go, aided in no small measure by a bottler of a ride from the vastly-improved apprentice jockey Krisna Thangamani in engineering a well-orchestrated win.

The pace angle of the race Super Invincible (Wong Chin Chuen) looked to have the race all wrapped up when he straightened up looking full of running, but Webster who had camped outside Mark Walker’s sprinter for most of the way, was about to lay down the law.

The two lightweights went neck and neck to the line with Webster, always ahead by a slender margin, digging down a little deeper to hold sway by a neck from a very gallant Super Invincible.

Around one length astern, Muraahib (Louis-Philippe Beuzelin), who was backing up after his unplaced run in the Lion City Cup a week ago, had every conceivable chance to reel in both the winner and runner-up, but stayed one-paced to beat the fast-closing Sacred Rebel (Vlad Duric) to third place by a head.

Clocking 1min 4.35secs for the 1100m on Polytrack, Webster was chalking up his sixth win from 31 starts for stakes earnings that has now exceeded the $425,000 mark for New Zealand owner Graham Mackie.

“This horse lost his way a little after his two knee operations, but his last run was very encouraging and gave us the confidence back today,” said Meagher who won his first Group 1 race with Lim’s Lightning in the Lion City Cup (1200m) last Saturday.

“It was not the perfect race as I wasn’t sure about going back from 1200m to 1100m on the Polytrack.

“I gave him a trial couple of weeks ago just to keep him fresh for this race. Krisna rode him a treat, I seem to have some luck with Krisna (won on Perfect this year as well as Lady Sprintbok and Lim’s Unique at the tail-end of last year).

“I told him to be positive early, switch on the engine. He wound him up before the race.

“It’s good for Graham to have another win out of this horse.”

Krisna said he only applied Meagher’s instructions to the letter, which were basically to keep niggling at him just so the motor never falls into idle mode throughout the race.

“The horse jumped out nicely, and straightaway, he was off the bit,” said the Malaysian rider.

“I had to keep him on the bit. I used my whip in backhand style, and I think the light weight also helped him today.”