Trainer Steven Burridge cemented his strong ties with local owner Rayner Lee with yet another winner in Wealth Elite at Kranji on Saturday, though it’s unlikely the Brazilian-bred will ever scale the same heights as his best horse Trigger Express.

The 10-time winning son of Citidancer is a multiple-Group winner across both sides of the Causeway for the Lee-Burridge combination, landing among others the Group 2 Queen Elizabeth II Cup (1800m) in 2008 and Group 1 Piala Emas Sultan Selangor (2000m) in Kuala Lumpur a couple of months later.

“I’m very happy for Rayner. We go back a long way and together, we won the QEII Cup with Trigger Express, Eric Legrix rode him that day,” said Burridge. 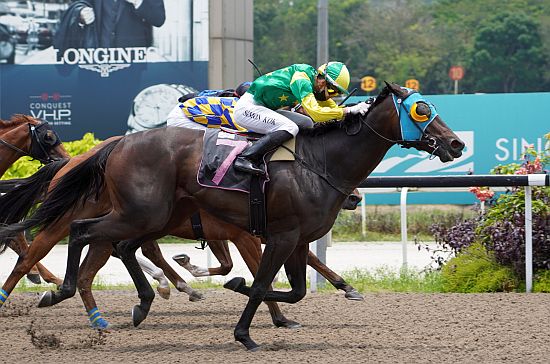 Interestingly, the 2008 Piala Emas Selangor Cup was the first renewal open to cross-border horses that year. The former Selangor Turf Club-based Burridge showed he knew his way around the Sungei Besi track when he landed two more successful raids of that race with Risky Business (2011) and Speed Baby (2012), both ridden by Noel Callow.

And of course, the QEII Cup was the race that put Burridge on the map after he was presented with the trophy by Her Majesty herself when King And King saluted in 2005. He won a third in 2014 with Wild Geese.

Champagne racing is rare for the Australian veteran these days, but keeping the home fires burning for loyal owners like Lee is enough to make his day.

“This one (Wealth Elite) is no world beater but he’s honest in his grade,” said Burridge.

“He puts your heart in your mouth because he gets so far back. If things don’t go right, he’s in trouble, if they do, he wins like today.

“They went pretty quick the two leaders (Country Boss and King Zoustar), and when they started to compound, my horse got a clear run on the outside and was too good.

At the rear from the get-go, Wealth Elite ($22) still had the job ahead when he was hooked out wide by Kok, but once he got clear sailing on the outside, he rounded up the field in no time, even if he was inclined to lug in early.

Once he was on the straight and narrow, he motored home to finish over the top of his rivals and defeat Our Pinnacle (Danny Beasley) by half-a-length.

Happy Friday (Iskandar Rosman) was being hailed the winner when he struck the front early, but found two better to run third another short head away. The winning time was 1min 11.49secs for the Polytrack 1200m.

A five-year-old by Midshipman, Wealth Elite has now registered four wins and three placings from 17 starts for close to $90,000 in stakes earnings for Lee’s Loti-A Stable.