Champion trainer Mark Walker is convinced bold frontrunner Yulong Edition can go against the grain and does not have to necessarily lead to showcase his best.

The Irish-bred five-year-old by Makfi has posted all his six wins (four over the mile and once over 1800m and 2000m) at Kranji from the front.

With the drop back in distance to 1400m at his comeback race in the $100,000 Class 1 event this Sunday, Walker is conscious he might not have the same gate speed to match. 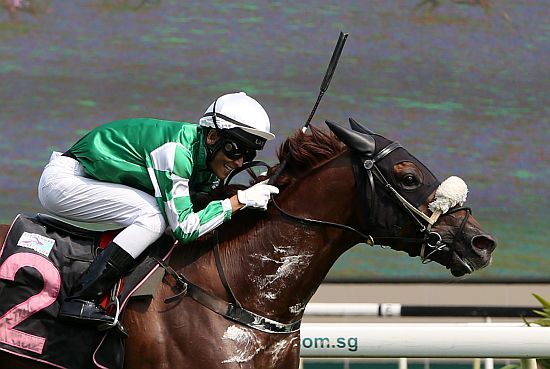 Yulong Edition at one of his six all-the-way wins on November 10. Mohammad Nizar rode him then, picture Singapore Turf Club

But with the majority of the other runners being of the same ilk – middle-distance performers or stayers using that first-up run to hit the ground running towards the Group 1 Kranji Mile on August 16 – and none known for tearing up the turf early, Yulong Edition might still land into the bunny role when the gates open.

Walker would, however, still like to see a less one-dimensional ‘Edition’ from this Sunday - take a sit instead of being the usual suspect getting chased down inside the last furlong.

“Most horses are using it as a lead-up race to the Kranji Mile, just like him. The 1400m may be short of his best distance, but I think he can still run a cheeky race,” said the New Zealander.

“I don’t know if he has the speed to go forward in such a race. We’ve actually been teaching him to settle off the speed.

“We rode him back in his barrier trial and he travelled nice and relaxed at the rear (ran sixth to Pennywise). We just want him to be happy and comfortable, he doesn’t have to lead.”

Walker’s rising apprentice jockey Hakim Aiman Kamaruddin sat on the Yu Long Stable-owned galloper in that barrier trial, and will keep his seat in the race.

“Aiman is riding very well. He’s shown us what he can do in a short time, and he can claim down to three kilos,” he said.

“He came with plenty of experience in Malaysia. I like his style, he can read a race and he’s improved a lot.”

Walker also saddles Sacred Croix in the same race, and here again, he has entrusted the reins into another three-kilo claimer, his second apprentice jockey Ng Choon Kiat.

The Savabeel five-year-old emerged as one of Walker’s most progressive racehorses last season, sling-shooting from maiden to Group level in the space of four wins on the bounce.

He was not disgraced in the first two Legs of the Singapore Four-Year-Old Challenge, finding one better each time in Cliff Brown’s bonny mare What’s New, but he did not quite cut the mustard in the last Leg, the Group 1 Singapore Derby (1800m).

The swagger was gone and his next runs can be described as a mixed bag, but Walker said he was a “victim” of his own meteoric rise.

“Sacred Croix is one of those horses who climbed through his grades too quickly,” said the three-time Singapore champion trainer.

“He was a little bit victim of the system. He shot up in the ratings, but soon found it tough at Class 1 or 2 level.

“He’s a pretty good horse, but he’s got nowhere to hide, and he’s running in a tough race on Sunday.”

Sacred Croix was one of the driving forces behind the Raffles Racing Stable, but like all the other horses under that banner, has been leased to the Remarkable Stable when the Malaysian-owned outfit exited Kranji in the wake of the COVID-19 outbreak.

Another such takeover transaction is I Am Sacred who launches his Kranji career in the $75,000 Restricted Maiden Division 1 race over 1200m, along with two other Walker newbies, Entertainer for the Fortuna NZ Racing Stable and Speedy Missile for the Fairdeal & Ronald Lau Stable.

A three-year-old by I Am Invincible, I Am Sacred led all the way under Ng for an impressive barrier trial win on Tuesday. He has drawn well in two and will be ridden by Juan Paul van der Merwe while Ruan Maia and Ryan Munger are booked on Entertainer and Speedy Missile respectively.

“I Am Sacred seems to be a nice horse, but it depends on how he behaves at the gates. He’s a bit of a barrier rogue,” said Walker.

“The Singapore Turf Club starters John Pepe and Damien Kinninmont have done a great job to iron out these problems since he arrived from Australia.

“I’ve also got Entertainer and Speedy Missile in that race and Savvy Command (Benny Woodworth) in the other RM race. They’re RM’s at their first race and we’ll see how they go.”

A fifth Walker first-timer makes his maiden Kranji appearance in the $50,000 Class 4 Division 2 race over 1200m on Polytrack, but at least, there is less of an unknown quantity in the equation. Exdream is a tried Australian import for the Fairdeal & Ronald Lau Stable as well, and boasts a record of three wins in New South Wales and Queensland under his belt.

“Exdream won three races in 11 starts in Brisbane and Sydney. He seems to be a nice horse for Singapore, but he’s in a hot field - the two horses (Water Rocket and My Big Boss) will be hard to beat,” said Walker.

“He probably needs more time to acclimatise, but if he runs on his Australian form, he can run in the top four or five.”

The Dream Ahead four-year-old was first handled by Newcastle trainer Kris Lees for whom he won his first two races in New South Wales - Coffs Harbour (1200m) in 2018 and Cessnock (1150m) last year. He kept venturing further up north into Queensland before transferring to Deagon trainer Michael Lakey who prepared him to his third win at Ipswich (1200m) in August 2019.