The theory that running feature spring race days against each other would further expand the pie for both Victoria and NSW jurisdictions to share has instead resulted in a cannibalisation of the day, according to the Victoria Racing Club.

VRC chief executive Neil Wilson told RSN927's Racing Pulse on Tuesday that betting figures suggested the 'competition' theory was flawed as turnover on the two 'major clash dates' for the spring was horribly down for the Victorian clubs on the previous year.

Caulfield Cup Day was hit hardest as the $14 million The Everest moved up against it for the first time, with turnover on the Caulfield program a whopping 25 per cent down on the previous year.

The inaugural $7.5m Golden Eagle was staged on Victoria Derby Day and turnover on the Flemington meeting tumbled 18 per cent on the previous year.

"If you look at that from a wagering point of view, for the whole week we are about five per cent down on wagering from last year, which is against the trend of the Spring Racing Carnival in total, which has been much higher than that," Wilson said.

"Our view of it is the pie of Derby Day nationally was split differently this year and more of it went to Sydney.

"So, the theory of 'competition's good' because it builds a bigger pie perhaps needs to be looked at because perhaps its more about a cannibalisation of that pie in terms of the Victorian component shifting north." 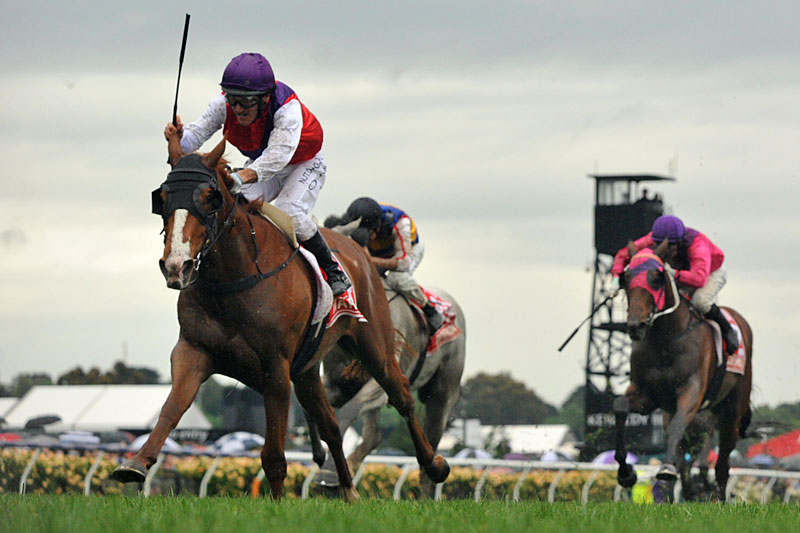 Wilson said the figures prove that racing clubs cannot be solely reliant on betting returns into the future.

"We've had a pretty good run of (betting) increases and everybody understands where there are a run of increases, at some point that doesn't continue the way it has," Wilson said.

"What it means for us at the VRC, we can't be reliant on that as our source of revenue otherwise we won't be able to plan for the future in the way we need to.

"So, we are looking at other revenue sources around our media side, our non-race day event side and really building that as a foundation to enable us to not be as exposed as heavily as we might have been in the past on wagering returns."

Despite a crowd drop of around 20,000 over the four days to a total of about 276,000, Wilson said the club was in fact pleased with the attendance given the factors.

"We're very happy," he said. "I have been reading a lot of the press and a lot of the commentary about 'where's the Melbourne Cup Carnival' and 'are we in this serious decline' and 'is it all over' and I think it's been a bit hysterical to be honest.

"We've seen the Sydney encroachment on Derby Day particularly. The economy is not where's it's been over recent times. We've seen some discretional spending changes as well."

Wilson said the horse welfare factor, which came out of the 7:30 program on the ABC of a slaughter of horses at a Queensland abattoir, made an impact on the carnival.

"We looked at it as an executive team and we've had the welfare issues, Sydney talking of changing Melbourne Cup Day, we've had the Sydney impact on Derby Day and then the weather hit us over the three days and you sort of say this is a pretty resilient event if it can work its way through that," he said.

"These are not excuses. This is the analysis we are doing to make sure we focus on the right things going forward and not just react to 'everything's falling off'.

"Then, to say you are less than 10 per cent off last year, is a pretty good result and we're very happy and I think it says something about the platform we have for that week.

"People will come rain, hail or shine to Derby Day because it's the best race day in Australia.

"People will come to the Lexus Melbourne Cup because it's the best race in Australia."

Wilson said the post-carnival review will also include pricing, which at $89 for an adult were viewed as being excessive in some quarters.

He said it was possible the club could have a 'segmentation' of pricing over the different days of the carnival in future years.