There may be no Group 1 racing at Caulfield but for the inform Mick Price & Michael Kent Jnr stable a runner on Saturday may be headed in that direction.

Price and Kent Jnr have won the Group 1 South Australian Derby and The Goodwood in the past two weeks and are one of the in-form stables in the country. A benckmark 84 grade race over 1600m will be the next assignment for Visinari (Fr) who is unbeaten at midweek level in two runs for the stable, which may eventually lead to a start in the Group 1 Toorak Handicap (1600m) at Caulfield in October.

Starting his career in the UK, Visinari (Fr) raced for Sam Kavanagh in NSW before joining Price and Kent Jnr.

“I’ve had two Group 1 winners for (owner) Rob Ferguson before, in Tarzino and Velocitea,” Price said. “So, I had a relationship with Rob already and he was kind enough to give us the horse to look at.

“The horse has one girl that looks after him and she does a good job. He can be a bit bouncy and a bit revvy, but he’s settled in well to Cranbourne as we use that heavy sand which he seems to enjoy. He’s one of those horses, the less you do with him, the better it is.” 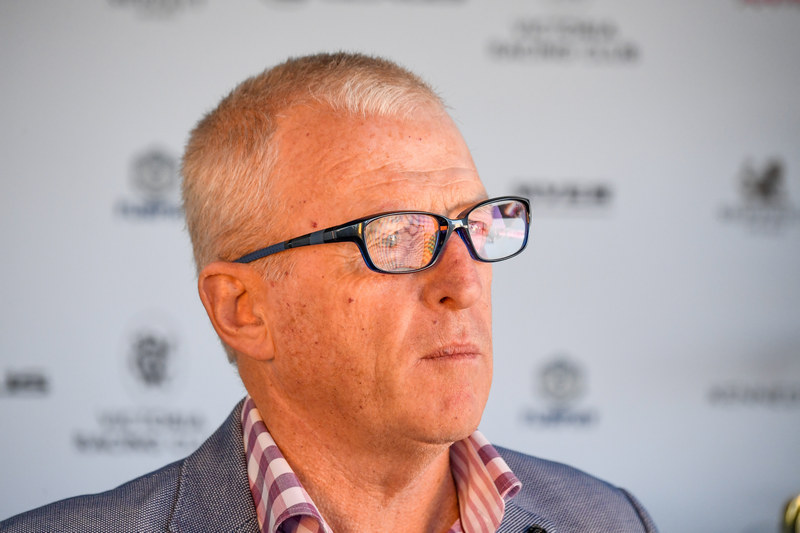 Price has one eye on the Winter Championship for Visinari (Fr), picture Racing Photos

Price said the 1600m journey, over which Visinari (Fr) races on Saturday, looks a nice trip for the gelding. In the lead-up to the spring carnival, he stated the import could be a Winter Championship contender.

“I think his best distance is going to be 1600 metres looking at him,” Price said. “He could be effective over 1400 metres fresh, but I would like to get his rating up so I could look at the Toorak Handicap with him.”

Price and Kent Jnr will also saddle Fifth Position (Ire) in Saturday’s race who will be first-up since December.

“He gets back and hangs in, and it cost him a race at Flemington one day,” Price said.

“We’ve got a bit of gear on him now, a bubble cheeker and a one-eyed blinker, and he’s worked well. This is his third preparation for us, so he needs to show us something.”