Victoria’s Spring Racing Carnival will this year offer more than $100 million in prizemoney and bonuses for the first time in its history.

The announcement comes with Thursday's annual release of the feature race program for the international racing showpiece which will see a record 16 races offering prizemoney of $1 million or more with 21 coveted Group 1 races to headline.

Racing Victoria (RV), the Victoria Racing Club (VRC) and the Victorian Government have combined to deliver over $13 million in significant increases for the 2019 Spring Racing Carnival which further cement Victoria’s position on the global racing stage.

This brings the total uplift of prizemoney and bonuses offered across metropolitan Melbourne and country Victorian tracks this spring to more than $18 million, following the previously announced increases which took effect from 1 January 2019.

The jewel in the crown of Australian racing, the Lexus Melbourne Cup was also recently increased in prizemoney to a total of $8 million including trophies.

The enhancements will see Victoria remain a destination for the world’s best horses, trainers and jockeys, as they travel to take on Australia’s greatest racing talent.

A focus will also remain on three-year-olds and stayers, whilst showcasing elite weight-for-age racing headlined by the Ladbrokes Cox Plate at The Valley.

The major enhancements to the 2019 Victorian Spring Racing Carnival are as follows:

• Those hoping to secure a guaranteed start in the Melbourne Cup via a win in the ballot-exempt The Bart Cummings (2500m) at Flemington on Saturday, 5 October have an added incentive to do so with the prizemoney increased from $300,000 to $500,000;

• Prizemoney has been doubled for the VRC Sprint Classic (1200m) on Saturday, 9 November, making it one of two $2 million Group 1 races on the final day at Flemington alongside the Seppelt Mackinnon Stakes (2000m). 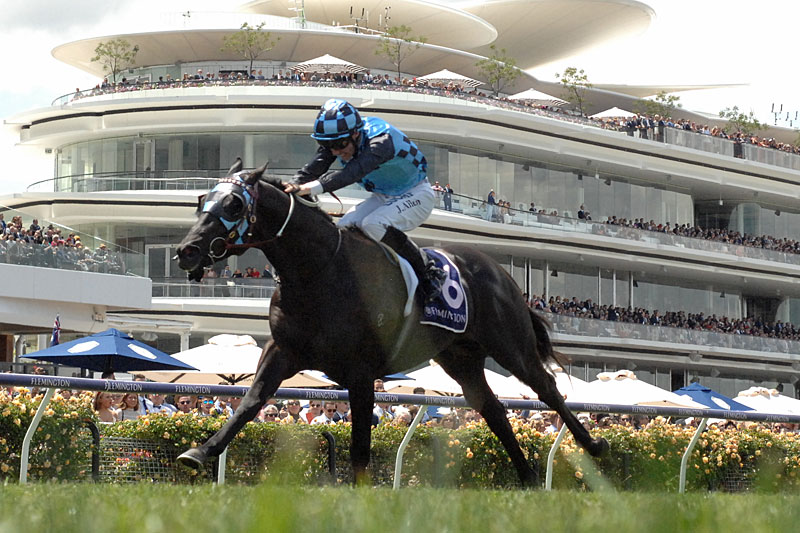 • The enhancement of elite three-year-old racing with prizemoney doubled to $1 million for the Group 1 Schweppes Thousand Guineas (1600m) for fillies which features on day one (Saturday, 12 October) alongside the stallion-making Group 1 $2 million Caulfield Guineas (1600m);

• The enhancement of day two on Wednesday, 16 October with prizemoney increased for the Catanach’s Jewellers Blue Sapphire Stakes (for 3YOs) from $350,000 to $500,000 and the addition of the Ladbrokes Coongy Cup (2000m) which moves from day three and will carry increased prizemoney of $200,000 and the final ballot exemption into the $5 million Stella Artois Caulfield Cup (2400m) three days later.

New bonuses totalling $4 million have been announced with Australasia’s weight-for-age championship, the $5 million Ladbrokes Cox Plate (2040m) at The Valley on Saturday, 26 October central to two of them:

In addition, the VRC have doubled their existing bonus to $200,000 if the winner of the $300,000 Queen Elizabeth Stakes (2600m) at Flemington on 9 November was a final acceptor for the 2019 Melbourne Cup, but was balloted from the race or won either the 2019 Bendigo Cup, Geelong Cup, Moonee Valley Cup, Herbert Power Stakes, VRC St Leger or placed 1st or 2nd in the VRC The Andrew Ramsden, The Bart Cummings, or the Lexus Stakes.

The Moonee Valley Racing Club will showcase two $1 million Group 1 weight-for-age sprints under lights at The Valley for the first time with prizemoney for the Moir Stakes (1000m) on the opening meeting of the night racing season – Friday, 27 September (AFL Grand Final Eve) – doubled to join the Manikato Stakes (1200m) on Friday, 25 October.

An additional $8 million is being invested across 63 Group and Listed races throughout the Spring Racing Carnival including increases to minimum prizemoney for all Group 2, Group 3 and Listed metropolitan races from Turnbull Stakes Day (5 October) to Seppelt Wines Stakes Day (9 November):

• An additional $700,000 for the third annual Melbourne Cup Carnival Country Series which is run exclusively for country trainers licensed in Victoria only without a metropolitan base nationwide;

• The series will again culminate with the 1600m final at Flemington on Kennedy Oaks Day, 7 November, where the first two placed horses from each heat will have the opportunity to compete for $500,000 in prizemoney – up $300,000 on 2018.

The consolidation of Ballarat Cup Day as the finale of the Spring Racing Carnival on Saturday, 23 November with an additional $500,000 invested across the program:

A total of $1.8 million in prizemoney will be on offer for what will be the sixth time that Ballarat has conducted its standalone Saturday cup meeting.

In addition to a major increase for the Carnival-ending Ballarat Cup, prizemoney has been raised for the second year running for the following major country cups:

Star of the Saddle

In addition to the prizemoney increases, the Victorian Spring Racing Carnival will feature the “Star of the Saddle” series recognising and rewarding those jockeys who excel above all others on the sport’s biggest stage.

The following cash prizes will be on offer for the jockey who is the Star of the Saddle accruing the most points on each day:

The conditions for the Star of the Saddle will be released prior to the commencement of the Spring Racing Carnival.

“Victoria’s Spring Racing Carnival is an internationally renowned racing event and we are committed to again showcasing the best horses, jockeys and trainers from Australia and abroad across the Carnival’s most prestigious and coveted races," said Racing Victoria Chief Executive Officer, Giles Thompson.

“These enhancements to the 2019 Spring Racing Carnival come following the conclusion of our annual planning and budgeting process and continue the on-going investment in the carnival by Racing Victoria, the metropolitan Clubs, Country Racing Victoria and the Victorian Government.

“That on-going investment comes not only in the form of prizemoney, but in infrastructure and facility upgrades like the Victoria Racing Club’s wonderful new Club Stand at Flemington, increased Club funding to assist in the delivery of fantastic raceday experiences right across the state, along with enhanced integrity and welfare measures to ensure a fair and safe contest.

“With more than $100 million in prizemoney and bonuses on offer across metropolitan and country Victoria, this year’s Spring Racing Carnival offers a great opportunity for a broad range of owners, trainers and jockeys to share in the spoils.

“The Lexus Melbourne Cup, Stella Artois Caulfield Cup and Ladbrokes Cox Plate have shaped the history of Australian racing and will do so again this year, while the stallion-making Ladbrokes Caulfield Guineas and Coolmore Stud Stakes will crown our next superstars.

“Off the back of the announcement made earlier this season, we’re particularly pleased to deliver increases in the minimum prizemoney levels across a broad range of country and metropolitan meetings this Spring Racing Carnival, including 63 black type races. This follows on from our increase in prizemoney for all 67 Victorian country cups during the current season.

“The success of the Spring Racing Carnival has been built on the breadth of events and raceday experiences showcased right across Victoria, which is why we’re also pleased to enhance this year’s Ballarat, Bendigo, Cranbourne and Geelong Cups, along with delivering an expanded $1.3 million Melbourne Cup Carnival Country Series which will showcase our country trainers and tracks.

“In releasing our feature race program for the 2019 Spring Racing Carnival, I want to acknowledge and thank Martin Pakula and the Andrews Labor Government for their on-going commitment to Victorian racing and the Spring Racing Carnival which generates more than $760 million in economic benefit for the state. I would also thank to extend a special thank you to the VRC for their direct contribution of over $3 million.”

“The Victoria Racing Club is proud to make a significant direct investment of $3.2 million in prizemoney, in addition to the contributions from Racing Victoria and the Victorian Government, for the world-renowned 2019 Melbourne Cup Carnival, enhancing its position as Australia’s greatest racing event," said Victoria Racing Club Chief Executive Officer, Neil Wilson.

“The sizable prizemoney increases for the Coolmore Stud Stakes, Empire Rose Stakes, Kennedy Cantala and VRC Sprint Classic in particular will help ensure Cup Week continues to attract the world’s best horses, trainers and jockeys, and ensure our customers can experience the very best in racing and entertainment on and off course.

“Today’s announcement follows the recent increase in prizemoney for the Carnival’s jewel in the crown, the Lexus Melbourne Cup, which is now worth a record $8 million in prizemoney and trophies.

“The VRC leads the way in the development of prizemoney initiatives, bonuses and innovative offers to participants, with the Club’s annual prizemoney and bonuses direct contribution now standing at over $10.5 million in addition to industry allocations.

“Throughout the year the VRC’s significant investments are distributed across a number of strategic priorities including equine welfare, prizemoney, customer events and experiences, digital engagement and infrastructure aimed at ensuring Cup Week remains one of the world’s best sporting, entertainment and tourism events.

“The VRC is thankful for the support of Racing Victoria and the Victorian Government and their commitment to maintaining Victoria’s world-class position in racing.”

“The government is proud to join with Racing Victoria to ensure that this will be the best Spring Racing Carnival yet," said Victorian Minister for Racing, Hon. Martin Pakula.

“Racing across the board will benefit – from Group 1s at Flemington, Caulfield and Moonee Valley to cup-day cards at Cranbourne and Bendigo – and that’s great news for carnival-goers and the many thousands of people who work in the industry.

“We’ve delivered our support through the Victorian Budget 2019/20 with an additional contribution from the Victorian Racing Industry Fund, and we look forward to Victoria continuing to set the benchmark for Australian racing.

(*The 2019 Caulfield and Thousand Guineas winners will be only eligible for one $1 million bonus if successful in the 2019 Ladbrokes Cox Plate).