It’s the height of the spring racing season in Japan and Tokyo Racecourse remains in the spotlight, with top-level races highlighting weekend racing each and every week for the next four weeks.

On May 12, it’s an all-female favorite for 4-year-olds and up – the Victoria Mile. Nineteen fillies and mares have been nominated for the race’s 14th running and 18 of them will vie for their share of the nearly JPY227 million up for grabs. Five runners are back from last year’s field, the rest are taking on the Victoria for the first time.

Last year’s Oka Sho runnerup Lucky Lilac is expected to emerge as the race favorite but she is not considered a shoo-in. Lucky Lilac and last year’s Yasuda Kinen runnerup and 2017 NHK Mile Cup champ Aerolithe will most likely share the spotlight, but after that it’s considered pretty much open season when it comes to nailing the winner and the top-three finishers.

Races are run to the left at Tokyo, as they are at only two other JRA racecourses – Niigata and Chukyo. The 1,600-meter over turf at Tokyo starts at the top of the backstretch and dips slightly from the gate for about 250 meters. The track rises again, dips into the bend, and levels into the 525-meter long stretch. The track then rises two meters over 150 meters until the ground flattens out over the final 300 meters.

Upsets are common in the Victoria Mile, which has seen the race favorites win only three times in its history. Last year was no exception, as eighth pick Jour Polaire nosed out the favorite to clinch the race and take home the JPY105 million winner’s prize, the same amount on the line this year.

With no rain forecast for the rest of this week in Tokyo, a fast track is expected on raceday. The Victoria Mile is Sunday’s 11th race of 12 at Tokyo Racecourse. Post time is 15:40 local time. Here’s a look at some of the likely top picks.

Lucky Lilac: The Orfevre-sired Lucky Lilac started her career with a four-race winning streak at 1,600 meters that included the Grade 1 Hanshin Juvenile Fillies and two other graded-stakes races. Second in the Oka Sho (Japanese 1000 Guineas) and third in the Yushun Himba (Japanese Oaks), she missed the money for the first time with a ninth in the Shuka Sho. Four months off and she returned this year to finish second in mostly male company in the Grade 2 Nakayama Kinen (1,800, G2). Next up, she went to the gate the favorite in the Hanshin Himba Stakes (1,600, G2) but ran into traffic problems in the final bend, lugged in, but, with the top eight horses bunched over the finish line, still managed to finish only 0.2 seconds behind the winner. The numbers are well on Lucky Lilac’s side. Her second in the Oka Sho was only 0.3 seconds off the record-setting time of winner Almond Eye. With her biggest rival aimed for the Yasuda Kinen, Lucky Lilac is expected to hold center stage Sunday. 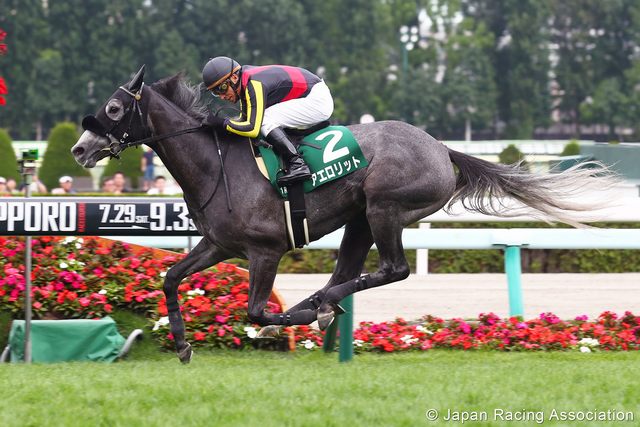 Aerolithe: A 5-year-old daughter of Kurofune, Aerolithe is back for her second bid in the Victoria Mile and looking to win her second Grade 1 after the NHK Mile Cup in 2017. Last year, she headed into the Victoria after 2 1/2 months off following a second in the 1,800-meter Nakayama Kinen, and finished fourth. This year, however, she’s returning to the track for the first time since returning from the U.S., where she ran ninth out of 10 in the 1,900-meter Pegasus World Cup Turf at Gulfstream on Jan. 26. At Tokyo, however, where she has a 2-1-4-2 record in the mile (all Grade 1 events), better things are expected. Though she has looked good in work, the main question is whether she can be successful without a prep. Last year, she followed up her fourth in the Victoria with a second by a nose in mixed company in the Yasuda Kinen. Jockey-turned-trainer Takanori Kikuzawa said, “Everything has gone well since getting back to Japan and I’ve been careful not to let her get heavy.” Aerolithe has been getting work on the hill, on the flat and in the pool. Expectations are high.

Mikki Charm: The 4-year-old Mikki Charm topped the field of 14 last out in the Hanshin Himba Stakes (1,600, G2) by half a length. It was her first time over 1,600 meters and the first graded-stakes win for the lightly raced daughter of Deep Impact. She debuted as a 3-year-old and made the board in her first seven starts, which included a second in the Grade 1 Shuka Sho behind Almond Eye. Her start previous to that, the Nakayama Himba Stakes, saw her finish last and though it was her first race in 5 months, jockey Yuga Kawada attributed the loss more to the long haul to the track from Ritto and the filly’s “difficult temperament.” It will be Mikki Charm’s first run at Tokyo. Her one second-place finish at Chukyo indicates the direction shouldn’t pose a problem. Key will be how she handles the trip from Ritto and if Kawada (expected to ride again) can charm her once again.

Primo Scene: The 4-year-old takes on her fourth Grade 1 and her first Victoria Mile. The daughter of Deep Impact has two Grade 3 wins, including the Sekiya Kinen at Niigata, but her best in top-level competition thus far is a fifth in last year’s NHK Mile Cup. Raced almost exclusively over the mile, with three wins and two seconds from nine starts, Primo Scene started the year with new partner Yuichi Fukunaga and finished second a neck behind a 5-year-old male in the Grade 3 Lord Derby Challenge Trophy on March 30. She has won over the Tokyo mile before and the long stretch suits her off-the-pace running style. With a prep behind her, the Tetsuya Kimura-trained dark bay is looking good and won high marks for her work over a heavy track at Miho on May 1. Fukunaga, second to Yutaka Take for most wins in all-female Grade 1 events, is expected to get the ride.

Red Olga: A 5-year-old by Deep Impact out of Erimo Pixy, Red Olga has had 13 starts in her career thus far, 10 of them over the mile. She has moved up slowly through the ranks, showing great consistency (5 wins and 3 thirds in her first 10 runs) before taking on her first graded-stakes race last December. She started this year with a 1:32.0 time in the Grade 3 Tokyo Shimbun Hai finishing second behind the 4-year-old colt Indy Champ. Last out she suffered interference in the Hanshin Himba Stakes, finished seventh, but was still only 0.1 seconds off the winner. All of her wins have come over lefthanded tracks, two wins at Tokyo and she has never finished out of the money in her five runs at Tokyo to date. Older sister Red Avancer finished third in the Victoria Mile last year. This girl is definitely worth a wager.

Cantabile, who finished only 0.4 seconds behind Almond Eye in the Shuka Sho, returned after five months off to finish sixth in the Hanshin Himba Stakes, with no time difference between her and the runnerup. It was her first mile in over a year. Improvement is expected.

The 4-year-old Normcore, by Harbinger, has only eight career starts (six of them graded stakes), but she has missed the top three spots in only two of them. After winning the Grade 3 Shion Stakes she passed on the Shuka Sho, but ran fifth in the Queen Elizabeth II Cup finishing ahead of Cantabile. She has won at the mile and finished third in the Flora Stakes (2,000, G2) at Tokyo.

Frontier Queen, a 6-year-old by Meisho Samson, just won her first graded stakes race last out in the Nakayama Himba Stakes (1,800, G3). It was a long time coming after having finished second or third in seven other graded-stakes races. Trainer Sakae Kunieda, who also trains Almond Eye, said, “She’s been up against tough competition since last autumn. She can handle a speed race and my hopes are high.”