After a lengthy battle with liver cancer, popular owner Nick Moraitis has died, aged 87. He is best known for his ownership of Hall Of Fame galloper Might And Power (NZ), who in a 33-start career registered 15 wins including the Melbourne Cup, the Caulfield Cup and Cox Plate. 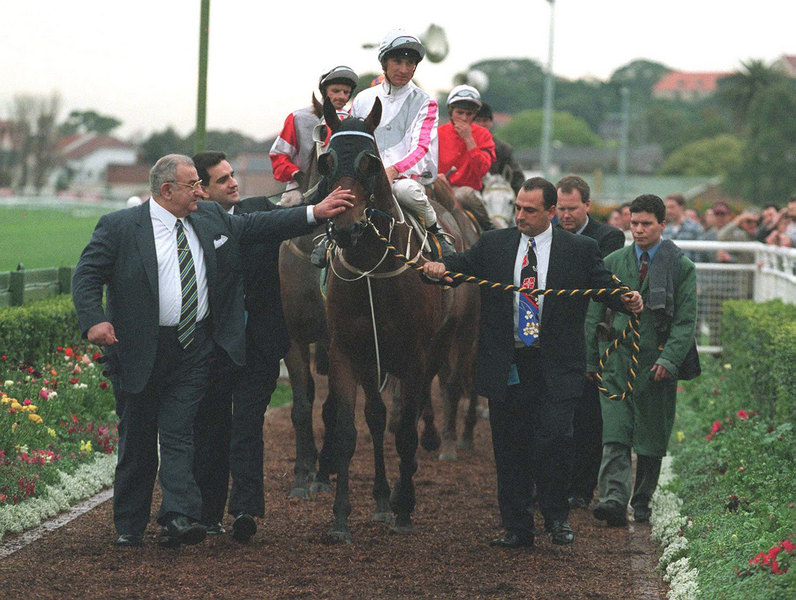 Nick Moraitis (left) with Might And Power and Brian York after the Group 2 Chelmsford Stakes, picture Sportpix.com.au

Might And Power (NZ) would go on to win more than $5 million in prizemoney and was one of Australia’s super gallopers during the late 1990’s, and lived out his retirement at Living Legends on Melbourne’s outskirts until his death in 2020 at the age of 26.

Moraitis was not only the owner of a champion racehorse, but he was also the owner of one of Australia’s biggest fruit and vegetable businesses before developing his love of racehorse ownership.

Besides Might And Power (NZ), Moraitis also raced a number of other high-class gallopers including Exceed And Excel, Fiumicino (NZ), Love Conquers All and Destiny’s Kiss, to name just a few.

“Nick was a larger than life character who was not only a substantial owner of horses, but also put back into the industry as an administrator.

“Nick was a huge supporter and contributor to the breeding industry as well as a big supporter of investment in the younger generation to engage in horse racing; he was always looking at the big picture.

“Nick could hold a room with his charisma and presence. He also worked hard to assist charities and in 2006 created the annual ‘Might and Power Gala Raceday’ at Rosehill Gardens to raise funds for Cerebral Palsy Alliance.

“The NSW Thoroughbred Racing Industry is the poorer for Nick’s passing and we send our sincere condolences to the family and friends of Mr Moraitis.”