Laxon had lived in retirement in the Coromandel seaside town of Whitianga since returning from Singapore in 2017, the year after his induction to the New Zealand Racing Hall of Fame.

He had ruled supreme in Singapore training ranks after relocating there in 1999, claiming nine premierships and becoming the first to win 100 races in a season, and the first (and still only) trainer to reach 1,000 wins at Kranji on the way to a full tally in excess of 1,250.

Laxon was born into racing as a member of a family involved since New Zealand’s earliest European settlement years. Growing up north of Hamilton, as a teenager he became an amateur rider and in his final raceday ride he won the Duke of Gloucester Cup.
After completing a carpentry apprenticeship, he was drawn fully into racing when he established a stable near Ngaruawahia.
From there he first made his mark with the 1974 Great Northern Hurdle winner Cobland, who he owned with his late wife Jenny, before establishing his credentials as the trainer of major flat performers.

A big part of that early success was the association Laxon built with the brothers Philip and Peter Vela, leading to their joint maiden Group One success with the Sir Tristram filly Noble Heights in the 1981 New Zealand 1000 Guineas.

Sir Tristram was also the source of the Laxon-trained, Vela-owned and bred Romanee Conti, winner of the 1993 Hong Kong International Cup, and dam of Ethereal, who was trained by Laxon’s second wife Sheila to win the 2001 Caulfield and Melbourne Cups.

Sir Tristram also sired the Vela-owned and bred Riverina Charm, a four-time Group One winner on either side of the Tasman under Laxon’s training, while for owner-breeder Fred Bodle Laxon prepared the giant Sir Tristram mare Empire Rose to win the 1988 Melbourne Cup. 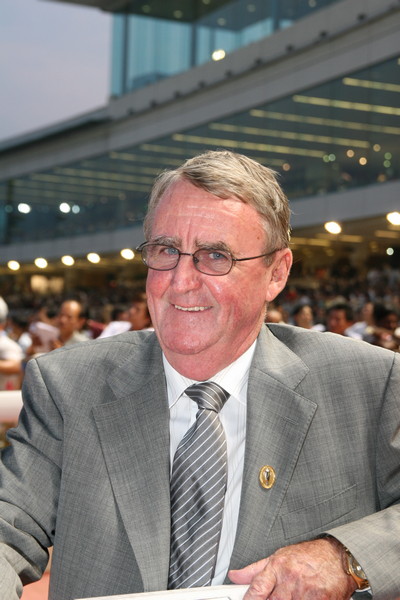 “Laurie was an outstanding trainer and horseman who was particularly skilled with fillies and mares,” commented his close friend and near neighbour, New Zealand Bloodstock Chairman Joe Walls.

“His astute horsemanship was noted by a number of successful breeders, most notably Peter and Philip Vela, and they had some great times together.

“When Laurie went to Singapore he remained staunchly loyal to the New Zealand-bred and much of his success there was down to the horses he sourced from New Zealand,” added Walls, who confirmed that Laxon, who recently turned 75, passed away in his sleep overnight.

Another to pay tribute to Laxon was highly respected former trainer Bruce Marsh, who developed a close friendship as a fellow Kiwi expat in Singapore.

“Laurie was the instigator of me going up to Singapore,” said Marsh, who is now retired in Cambridge.

“He was an immense help to every New Zealand and Australian expat who went up there – myself, Mark Walker, Cliffy Brown, Michael Freedman, all of us.

“He went out of his way to show us the ins and outs, and he was always there if you needed any help.

“Obviously Laurie was a top-notch trainer, he will always be remembered for his huge success back home, in Australia and up in Singapore.”

Laxon is survived by his sons Craig, Roger and John, and daughter Lucy.