International racing, from Japan to France with a stop in New York, nicely fills the weekend horse racing schedule while U.S. fans suddenly look forward to a Preakness Stakes without the Kentucky Derby winner but with the Kentucky Oaks winner.

The decision to withhold 80-1 Derby winner Rich Strike from the second jewel of the Triple Crown leaves at least two and possibly all three of those who followed him across the wire to battle it out in Baltimore. But there's a new challenger in the form of the Oaks winner Secret Oath.

A diverse field of fillies and mares is on tap for the Grade 1 Victoria Mile in Tokyo. Three-year-old colts and fillies race at Longchamp in Paris. Stradivarius opens his 8-year-old campaign in the north of England.

And what does Groucho Marx have to do with the British Classics? See the "Around the World …" section and watch out for Hugo Hackenbush.

Okay. Now let's get on with our own "day at the races."

Until Thursday afternoon, the May 21 Preakness Stakes at Pimlico was expected to feature a rematch of Kentucky Derby winner Rich Strike and the horse who almost won the race, Epicenter. That scenario went out the window as Rich Strike's owned pulled the plug on a Preakness run and said, in essence, "See ya in the Belmont."

Epicenter, who appeared to have the Derby in the bag before Rich Strike struck, remains at Churchill Downs and is expected to ship to Baltimore early in the week, according to a spokesman for his owner. Trainer Steve Asmussen said the colt has recovered nicely from his effort in the Run for the Roses and performed well in his first gallop back.

Trainer Todd Pletcher said third-place Derby finisher Zandon is still a possible Preakness starter but added he plans to wait a few days to assess the situation. Simplification, who was fourth in the Run for the Roses, already is on the grounds at Pimlico and set to roll in the Preakness.

The new challenger in this eventful series is Kentucky Oaks winner Secret Oath.

Trainer D. Wayne Lukas Thursday said Secret Oath, who finished third against colts in the Arkansas Derby before the Oaks victory is "probable" for the Preakness. "Maybe a probable-plus…. If she does that (wins), she's got a chance to be Horse of the Year, when you step out of the box that far."

A week ago, Rich Strike's connections were talking about shipping that colt to New York for Saturday's $200,000 Grade III Peter Pan Stakes at Belmont Park. Of course, that plan was trumped when he drew into the Kentucky Derby the day before the race.

Even sans Rich Strike, the Peter Pan has a solid field, arguably led by Western River. At first glance, the Tapit colt doesn't stand out, coming off his maiden win in his fifth start, all at Oaklawn Park. On second glance, he's improved dramatically at age 3. And, on third glance, he's a full brother to 2016 Arkansas Derby and Belmont Stakes winner Creator.

There's plenty of potential in the rest of the field but it's mostly just that -- potential. Golden Glider arrives after finishing fourth in both the Grade II Tampa Bay Derby and the Grade I Blue Grass. Cooke Creek was second in the Grade III Nashua back in November but has gone the wrong way since. We the People burned a lot of money with a seventh-place finish in the Arkansas Derby.

Reigning Breeders' Cup Turf winner Yibir returns to Belmont Park for Saturday's $700,000 Grade I Man o' War and, all equal, looks likely to return to the win column after finishing second in his last two starts in Dubai and at Newmarket. The 4-year-old Dubawi gelding won the Jockey Club Derby Invitational over this course last September in his first U.S. visit, then returned to win at Del Mar. He was second to Shahryar in the Group 1 Dubai Sheema Classic and then second to Living Legend in a somewhat flat effort in the Group 2 Jockey Club Stakes on return to England.

Gufo was second in the 2021 Man o' War, beaten just a nose by Channel Cat, and returns. He tossed in a clunker in the Breeders' Cup, finishing 10th, but is a proven commodity in New York Grade I turf races. Given that Yibir stalled out in the final furlong in his last effort, watch out that So High doesn't take them the whole 1 3/8 miles on the lead. 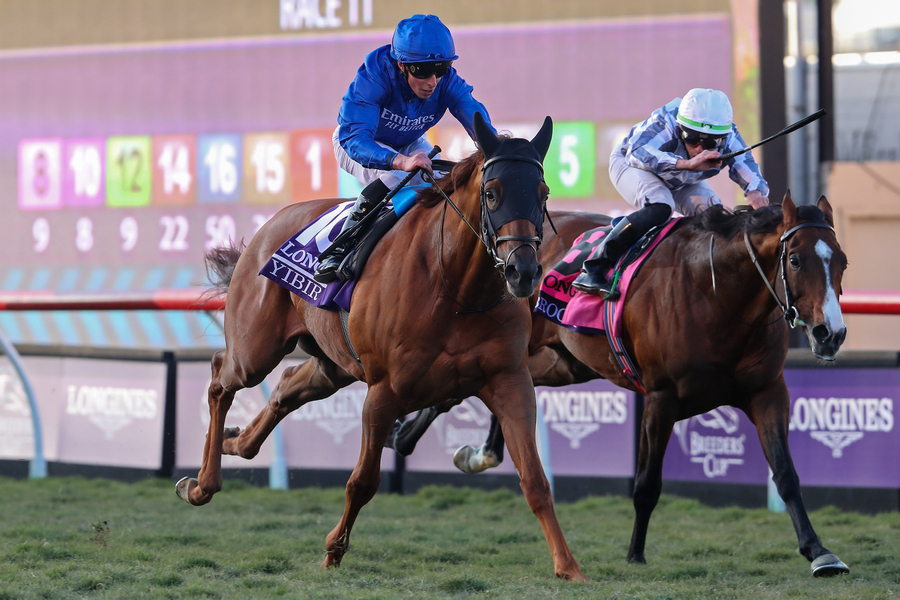 Yibir, seen winning the 2021 Longines Breeders' Cup Turf, is in action at Belmont Park this weekend in the Grade I Man o' War, photo by Carolyn Simancik, courtesy of Breeders' Cup

The omnipresent Chad Brown sends out two of the seven fillies and mares entered for Saturday's $150,000 Grade III Beaugay Stakes at Belmont Park, Rougir and Lemista, and they're sure to be well-fancied.

Rougir won the Group 1 Prix de l'Opera at Longchamp last October before a seventh-place showing, with traffic issues, in the Breeders' Cup Filly & Mare Turf before being handed off to Brown. Lemista finished second in the 2021 Beaugay in her first U.S. start but has not raced since finishing third in the Grade I Beverly D. at Arlington Park last August.

Saturday's $150,000 Grade III Runhappy Stakes at Belmont Park drew the top three finishers from the Grade III Tom Fool March 5 at Aqueduct -- Officiating, Chateau and Repo Rocks. Chateau, second in this race last year, has been the most consistent performer and could be the controlling speed.

Sunday's $150,000 (Canadian) Grade III Jacques Cartier Stakes at Woodbine has a field of 10, many quite experienced. Among them are graded stakes winners Silent Poet, Tap It to Win and last year's winner, Souper Stonehenge. A lot of attention, though, will go to Striker, a War Front colt from the Josie Carroll barn who makes just his third career start. He won the first two over the same all-weather course late last season.

Saturday's $150,000 Grade III Vagrancy Stakes at Belmont Park has only five starters but one of them is Bella Sofia. The 4-year-old Awesome Patriot filly was last seen finishing fourth in the Breeders' Cup Filly & Mare Sprint last November but, prior to that, won the Grade I Gallant Bloom at Belmont and the Grade I Test at Saratoga. She's been working steadily and well at Belmont since mid-March. Frank's Rockette has been short in the win column of late but usually is in the money and is 2-for-3 at Belmont.

Sunday's Grade 1 Victoria Mile at Tokyo Racecourse, a "Win and You're In" Challenge Series race for the Maker's Mark Breeders' Cup Filly & Mare Turf, has as diverse a crew as you'd like and many who would be assets in November at Keeneland.

The white filly, Sodashi, will see if she really has turned a corner after faltering toward the end of 2021. Daring Tact will see if she's recovered from a suspensory injury diagnosed after the Group I QE II Cup in Hong Kong 13 months ago. Songline will see how much the rigors of travel have affected her as she won the Group 3 1351 Turf Sprint in Saudi Arabia in February.

Many of the others in the big field have been knocking on the door, showing promise, begging for a chance, etc., so it should be a fun race and good wagering opportunity

What's in a name? A priceless violin? A character in a Marx Brothers movie? This week in British racing has both -- and more.

Desert Crown advanced his Derby case convincingly in Thursday's Group 2 Al Basti Equiworld Dubai Dante Stakes at York. The Nathaniel colt, trained by Sir Michael Stoute and ridden by Richard Kingscote, sped down the middle of the course through the final furlong to win by 3 1/4 lengths from Royal Patronage with Bluegrass third. It was only his second start but he has won both with authority while stepping up in distance to Thursday's 1 mile, 2 1/2 furlongs.

Emily Upjohn became the new darling of the Cazoo Oaks watchers with an eye-catching victory Wednesday in the Tattersalls Musidora Stakes at York. Jockey Frankie Dettori said, per Racing Post, that at this stage of her career, Emily Upjohn is "probably in the same park" as the great Enable. John Gosden, who trained Enable, also handles Emily Upjohn, who is named after the character played by Margaret Dumont in the Marx Brothers flick "A Day at the Races."

Should Emily Upjohn win the Oaks, watch for a colt to be named Hugo Z Hackenbush -- Groucho's character in the same picture.

Stradivarius, long the standard by which European stayers are measured, returns to start an 8-year-old campaign Friday in the Group 2 Paddy Power Yorkshire Cup. Another Gosden-Dettori masterpiece, the Sea the Stars entire finished 2021 with three wins from six starts and exited the campaign finishing third in the Qipco British Champions Long Distance Cup in October. Friday's four rivals do not comprise the strongest field of the season.

Baaeed, undefeated after six trips to the track, is the odds-on pick among nine confirmed runners for Saturday's Group 1 Al Shaqab Lockinge at Newbury. The 4-year-old Shadwell homebred by Sea the Stars hasn't raced since getting home a neck in front of Palace Pier in the Group 1 Queen Elizabeth II Stakes on Champions Day last October. The opposition in the straight mile includes Breeders' Cup and Hong Kong traveler Mother Earth from the Coolmore operation and Godolphin's Real World, back from a couple of rough outings on dirt courses in Saudi Arabia and Dubai.