Some top horses from 2019 swing back into action during the long Memorial Day weekend as Churchill Downs and Santa Anita make up for time lost to the COVID-19 pandemic shutdown.

Maxfield will try to maximize his chances to make it to the delayed Kentucky Derby. Owendale, Sharing and War of Will also are expected back on the track.
On the international scene, UK racing is just a week away with a whirlwind of action in store but there's no shortage of racing this weekend elsewhere. Hong Kong winds up its Group 1 season with the Standard Chartered Champions & Chater Cup while Japan continues with the Grade 1 Yushun Himba or Japanese Oaks.

As racing continues to reopen, the handicapping challenges get tougher. For helpful hints and insightful commentary, check out what industry expert Jude Feld has to say at www.popejude.com. He's been there, done that and isn't shy about sharing his opinions.

First, though, read through this:

With the Belmont Stakes looming on June 20 to kick off this year's wacky Triple Crown, Saturday's $150,000 Grade III Matt Winn Stakes at Churchill Downs takes on a huge new measure of importance. Three-year-olds who a week ago had nowhere to go in their Triple Crown quest now have not only a target, but one that's almost upon them. It's time to stop peddling the exercise bike and get going.

That imperative applies in spades to Maxfield, a Godolphin homebred Street Sense colt trained by Brendan Walsh. Maxfield has been dangling out there on everyone's radar since he won the Grade I Claiborne Breeders' Futurity at Keeneland last October. But he hasn't raced since, so no one knows where he fits in the 3-year-old picure. Despite a nice series of works over the Keeneland track, he needs to show something in the 1 1/16-miles Matt Winn to keep his hopes alive for Classic glory.

Maxfield will tote 123 pounds, including Jose Ortiz Jr., conceding weight to all 11 rivals thanks to the Grade I win. He drew gate No. 10 -- no favor but not a significant problem, all being well at the start.

Some of the others have shown potential and, with the schedule pushed back farther into the year, they will have time to develop.

The race offers Kentucky Derby points on the 100-40-20-10 scale. Ny Traffic currently stands No. 12 on the "Road to the Kentucky Derby" leaderboard with 50 points, Major Fed is in the No. 18 slot with 30, Maxfield and Attachment Rate currently have 10 points each. Nadal leads with 150 points. 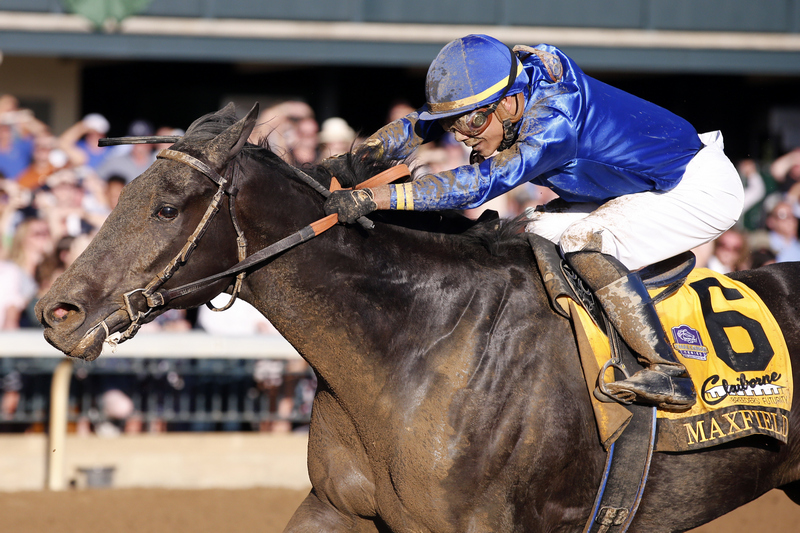 Maxfield, seen winning the 2019 Breeders' Futurity, gets back on the Triple Crown trail after a long break in Saturday's Matt Winn Stakes at Churchill Downs, photo courtesy Keeneland Racecourse

We all know the Kentucky Derby could have been known as the Kentucky Bunbury but for a coin toss way back in 1779 between the 12th Earl of Derby and Sir Charles Bunbury to decide the name of a new race for 3-year-olds.

But few realize the Belmont Stakes equally could have been the Schoenberg Stakes had not August Schoenberg not changed his name to August Belmont after immigrating to the United States from Rhenish Prussia in 1837. Belmont became one of the country's wealthiest men and helped organize the Belmont Stakes and his name later was given to the race. His son, August Belmont II, bred Man 'o War, regarded by many as the best-ever American-bred Thoroughbred.

In German, Schoenberg would be spelt with an umlaut over the "o" and without the "e".

Saturday's $100,000 Blame Stakes at 1 mile drew a talented and diverse bunch. Owendale, a 4-year-old Into Mischief colt, gets the oddsmaker's nod, in no small part thanks to his close second-place finish in last fall's Grade I Clark Handicap over the course. He was third in last year's Preakness and won both the Ohio Derby and the Oklahoma Derby, earning more than $1 million during the year. The others range in age up to 7 and several look capable.

Dunbar Road and She's a Julie top a field of eight for Saturday's $100,000 Shawnee Stakes for fillies and mares at 1 1/16 miles on the main track. Dunbar Road, a 4-year-old Quality Road filly, won the Grade I Mother Goose and the Grade I Alabama last summer, then finished third in the Grade I Spinster at Keeneland and fifth in the Breeders' Cup Distaff. She hasn't raced since. She's a Julie, a 5-year-old by Elusive Quality, has been idle since finishing fourth in the Spinster last Oct. 8.

Saturday's $100,000 Tepin Stakes for 3-year-old fillies at 1 mile on the grass features the return of 2019 Breeders' Cup Juvenile Fillies Turf champ Sharing. The Speightstown filly, trained by Graham Motion, won her final three starts last season and has been working, as they said, forwardly for her 3-year-old bow. The full field also includes Outburst, a British-bred filly by Outstrip, who was last seen winning the Grade III Florida Oaks at Tampa Bay Downs. Have a look, though, at the outside gate, to which Alms was relegated. The City Zip filly, a Godolphin homebred, is 4-for-4 at three different tracks, all by comfortable margins.

Saturday's fifth race is a $150,000 optional claimer at 1 1/16 miles on the grass that is chock full of graded stakes performers. A Thread of Blue, Mr. Misunderstood, Caribou Club, Hembee and English Bee all would be right in the mix in a much more prestigious race. Don't miss this one.

After the long coronavirus shutdown at The Great Race Place, there's a glut of stakes to make up in the coming month. When better than the Memorial Day weekend to get going?

The feature of the weekend is Monday's $300,000 Grade I Shoemaker Mile on the turf -- a "Win and You're In" race for the Breeders' Cup Mile this fall at Keeneland (fingers crossed!). We await final entries but among the likely are War of Will, last year's Preakness winner, who would be making his first start since finishing ninth in the Breeders' Cup Classic at Santa Anita last fall, and two from the never-to-be-overlooked Chad Brown barn, Raging Bull and Without Parole.

The three morning-line favorites drew the outside gates for Saturday's $200,000 Grade II Charles Whittingham at 1 1/4 miles on the turf. United, the 6-5 favorite, looks to build on his Feb. 1 win in the Grade II San Marcos. Originaire earned a career-best 100 Beyer Speed Figure in his last start, a Feb. 29 optional claimer but also posted a runner-up showing in last year's Grade II Del Mar Derby. Trainer Chad Brown sends Rockemperor, who has been knocking heads at Fair Grounds.

Only seven signed on for Saturday's $100,000 Grade III Daytona Stakes at 5 1/2 furlongs on the turf but there are some rugged competitors among them. The 2-1 choice on the morning line is Wildman Jack, a 4-year-old Goldencents gelding last seen winning the Group 3 Nad Al Sheeba Turf Sprint at Meydan in March. Cistron and Texas Wedge exit impressive wins and Murad Khan and Stubbins both have claims. The latter finished a closing fourth in last fall's Breeders' Cup Turf Sprint.

Monday's feature is the $100,000 All American Stakes at 1 mile on the all-weather track with the field yet to be finalized.

Daring Tact puts her undefeated record on the line in Sunday's Grade 1 Yushun Himba or Japanese Oaks at Tokyo Racecourse. The Epiphaneia filly scored her third straight win in the Grade 1 Oka Sho or Japanese 1,000 Guineas and would be only the second filly to win the first two legs of the Japanese fillies' Triple Crown while undefeated should she score Sunday.

Others in the fray include Cravache d'Or, a daughter of Heart's Cry who was third in last year's Grade 1 Hanshin Juvenile Fillies and fourth in the Oka Sho; Maltese Diosa, second in the Hanshin race, winner of the Grade 2 Tulip Sho in March but a disappointing eighth in the Oka Sho.

Although Daring Tact looks solid, several others have shown the potential to improve, including Ablaze, by Kizuna, and Des Ailes, one of eight Deep Impact fillies in the 18-horse field. Both are 2-for-2.

The race is contested left-handed at 2,400 meters with a final uphill climb to the middle of the stretch run. As do all Japanese tracks, Tokyo Racecourse continues to exclude fans from the races due to COVID-19 protocols.

Sunday's Standard Chartered Champions & Chater Cup is the final Group 1 event of a season that has been beset by street riots and coronavirus shutdowns. The Hong Kong Jockey Club was forced to cancel two race meetings at Happy Valley Racecourse, limit attendance at the Longines Hong Kong International Races in December and then to bar fans altogether from Champions Day and from Sunday's races.

Travel restrictions also prevented foreign runners from taking part in the three Group 1 events on Champions Day and also kept them out of the Champions & Chater Cup, leaving seven local runners to try the 2,400 meters.

Tony Cruz trains three of the seven, including likely favorite Exultant, who could nail down Hong Kong's Horse of the Year title with a win. The 6-year-old Teofilo gelding has three previous wins this season, albeit only one at the highest level. That was the FWD QE II Cup on Champions Day, when he easily got by pacesetting Time Warp, an old nemesis, then held off Furore for the win. Exultant's regular rider, Zac Purton, is back aboard.

Time Warp is back for another try. Of note, Cruz has replaced jockey Joao Moreira, who rode Time Warp in his two previous starts, with Chad Schofield. Moreira lands on Savvy Nine, a long shot among a quartet trained by John Moore. With Purton and Moreira locked in a tight duel for the jockey premiership, the switch is a blow to the Brazilian and a boost for the Aussie.

Furore also returns for another try. The others either are aging out of their best form or not quite up to the standards of Exultant and Time Warp. The situation reflects the lack of international competition and the fact that 2,400 meters is a rare distance in Hong Kong, with few local horses targeting the trip.

Now that the U.S. Triple Crown is set, so is Canada's biggest race, The Queen's Plate.

The 2020 edition of The Queen's Plate, North America's oldest continually run stakes event, has been pushed back from Jun 27 to Sept. 12 -- the weekend after the Kentucky Derby.

"The history of The Queen's Plate is so rich and the fact that it's been held every year since the inaugural race in 1860 is remarkable," said Jim Lawson, CEO, Woodbine Entertainment. "We are honored to be able to continue this rich history in face of adversity."

The Kentucky Derby has been run annually since 1875.

The Woodbine Oaks and the Plate Trial were rescheduled for Aug. 15. The Prince of Wales Stakes, the second leg of the Canadian Triple Crown, was reset from July 21 to Sept. 29 at Fort Erie. The final race, the Breeders' Stakes, run at 1 1/2 miles on the Woodbine turf, has not yet been rescheduled.