A change of headgear and a change of tactics has seen New Zealand three-year-old Tutukaka (NZ) run out a strong winner of the $200,000, Listed Geelong Classic. The Group 1 Victoria Derby (2500m) at Flemington on October 30 is the next target for Tavistock gelding following his win over 2200m on Wednesday. 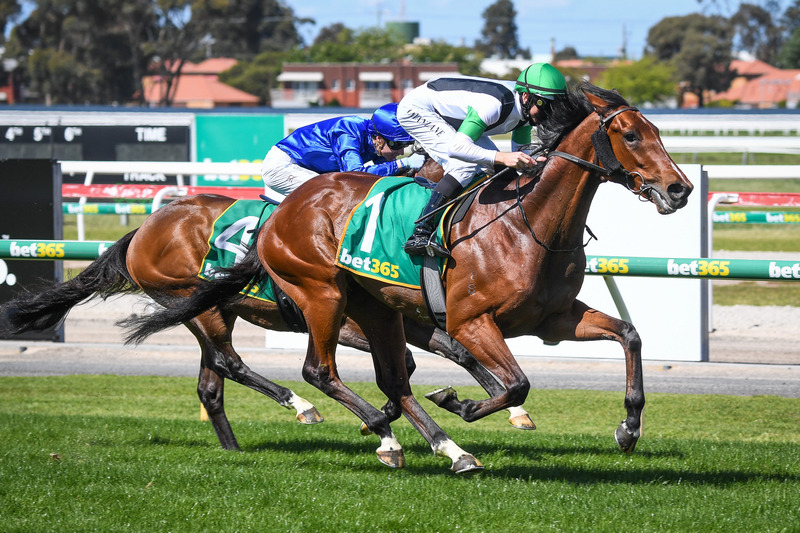 Tutukaka (NZ) proves to be a strong winner of the Geelong Classic, picture Racing Photos

After a last start fifth in the Listed Super Impose Stakes (1800m) at Flemington on October, trainer Tony Pike elected to remove the blinkers from Tutukaka (NZ) and reapply winkers. And a solid pace, set by Grinzinger King, allowed Tutukaka to settle back in the field and under a patient ride from Damian Lane, chime in at the right time and race away to a comfortable win.

Sent out second favourite at $4.60, Tutukaka registered a three-quarter length win from Character ($6), with Phere The Ex ($15) a further 2-½ lengths away third.

“He led up at a strong tempo with the blinkers and he was still a bit fresh last start,” Lane said. “But that run really brought him on.

“Credit to Tony Pike, he’s such a good trainer of these young stayers and I just thought [the pace] was perfect today.

“When Tony said that we wanted to ride him a bit quieter I knew we wanted to ride him behind the speed, but I thought it might have been the wrong day to do it. I didn’t think there’d be much tempo on paper and lucky for us, it worked out that there was and that was always going to suit this horse, a genuinely run 2200 metres. He was obviously strongest late.”

Now Tutukaka (NZ) must stretch out to 2500m and overcome the hoodoo of Geelong Classic winners going to the Derby. Induna (2011) and Nozomi (2014) both went on to finish second in the Derby after winning at Geelong, but are the only horses to have finished in the placings in the past 10 years.

Lane said the 2500m won’t pose a problem at Flemington. “I think he’ll be right,” he said. “He’s a tough horse who has always shown he’ll want a trip, so hopefully in 10 days’ time he’ll be right there.”