Troy See ends long time between drinks with a Beer

Troy See turned back the clock after scoring aboard Beer Garden at Kranji on Saturday to bring up his first winner since returning from one and a half years on the sidelines.

An inspired ride on the $84 outsider at only See’s second Kranji meeting back in the $50,000 Class 4 Division 2 race over 1200m had the 2018 Singapore champion apprentice jockey returning with a beaming smile at the weigh-in under the driving rain.

Well known for his constant battle of the bulge throughout a riding career that began in 2012, See was also pleased with both his current weight and fitness, considering he had been away from the game for so long. 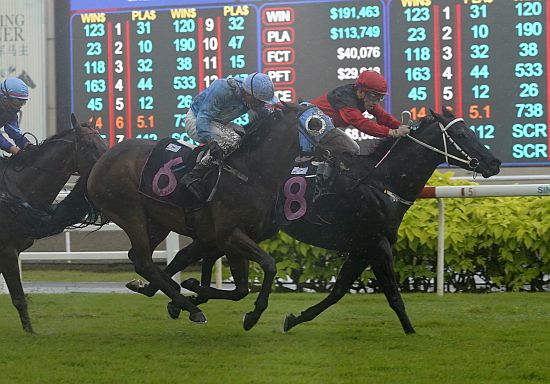 The fitness freak, who ran a gym during the time he was not licensed by the Singapore Turf Club, said he had not been loafing around since the good news came through last November he had been given a second chance (six-month licence).

“I’ve been working like a cow and eating like a peasant,” said See whose win-meter had stopped at 132 with Dragon High on March 24, 2019.

“The first week, I was blowing and it was frustrating as I couldn’t help the horses run through their natural rhythm. I was out of sync, but I feel a lot better this week.

“Still, I thought I’d have another quiet day today. I certainly didn’t give Beer Garden much of a chance from that draw (11), but he proved me wrong.

“Jerome (Tan) told me to try and jump well or take him back with cover if they are faster, but though he has a reputation of being slow away, he was good today.

“When I saw the leader (Mr Showman) on a loose rein, I knew I could win that race. He gave me a scare in the last 50m, but he held on well.

“Jerome has done a very good job with this horse.”

Ridden more forward than usual to stalk up Mr Showman (Ruan Maia), the Proisir four-year-old had the word “winner” written all over when See cut the ribbons at the top of the straight.

Favourite ($14) Pattaya (Louis-Philippe Beuzelin) made it interesting with a late assault, but Beer Garden dug down deep to cling on by a short head. Triple Bowl (Wong Chin Chuen) completed the tierce another 1 ¼ lengths away. The winning time was 1min 11.31secs for the 1200m on the Long Course.

The win has maintained Tan at the top of the heap for the second consecutive week, on three winners following his training double with Per Incrown and Surpass Natural on Day One, one clear of three-time Singapore champion trainer Mark Walker and 2018 champion Lee Freedman (Michael Clements and Ricardo Le Grange later joined on two winners after Vittoria Perfetta and Leatherhead scored respectively).

The brilliant run was a nice tonic to the parade ring mishap he unfortunately fell foul to in the first race. Tan was at the lead-in, but visibly wincing in pain as he held his right upper arm.

“I got kicked by my own horse, Big Day, in the parade ring. As I was about to give the jockey (Mohammad Nizar) a leg-up, the horse kicked out, he missed the jockey, but he got me on my right arm,” said Tan.

“But it’s good to see my horses running well. They are in form at the moment, it’s a good start to the season.

“From the bad draw, I told Troy to ride him more positive and settle behind Mr Showman, whom we thought would be the likely leader. Things just worked out well for us.

“It’s good to see Troy back a winner. I’ve supported him many times before and he deserves it.”

Beer Garden was bringing up his third win from 17 starts for prizemoney that have now hit just below the $130,000 mark for owner Ling Boon Lai.