Non-existent air travel between Melbourne and Brisbane has resulted in Alegron not being among the acceptances for the Group 1 Queensland Derby at Eagle Farm.

Godolphin Australia Managing Director Vin Cox said they were not prepared to put the James Cummings-trained three-year-old on a truck to transport him to Brisbane for Saturday’s 2400m contest.

“We could have put him on a truck but that would have been unfair on the horse as he’s seen more of Australia than Burke and Wills,” Cox told RSN. “He started his campaign in Melbourne, went up to Sydney, back to Melbourne, across to Adelaide and now he’s back in Melbourne.

“He’s a good stayer going forward and we’ve got lofty ambitions, and maybe we can turn him into a Cups horse.”

The lack of flights has come about due to Cathay Pacific cancelling their weekly flight from Hong Kong to Melbourne which in turn has had a flow-on effect. 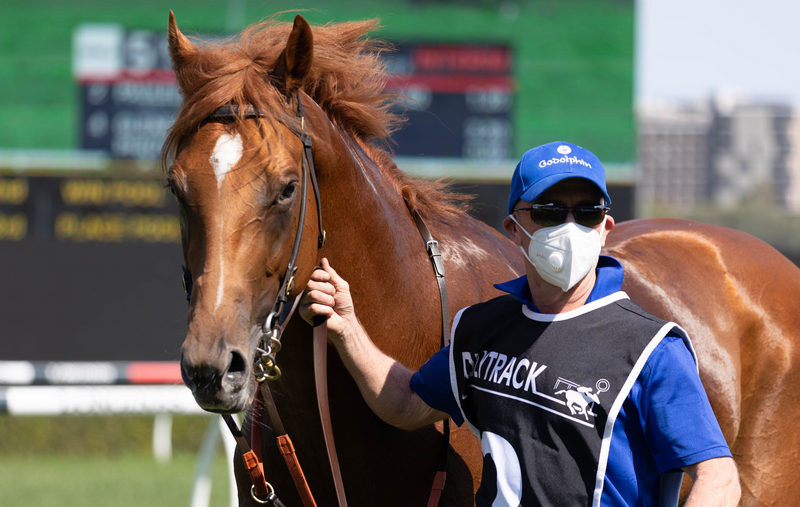 Paulele runs for Godolphin in the Kingsford-Smith Cup, picture sportpix.com.au

While Godolphin will not have a starter in the Queensland Derby, it will be represented by Paulele in one of the other two Group 1 races on Saturday’s program, the Kingsford-Smith Cup (1300m).

Paulele was floated to Brisbane earlier in the Winter Carnival before being touched out by Mazu in the Group 1 Doomben 10,000 (1200m) at Eagle Farm on May 14. On Saturday the quality colt has drawn barrier eight and will be ridden by James McDonald.

“He’s a horse that can tuck in behind the speed and hopefully J-Mac can pop him out and win convincingly,” Cox said. “It’s been pretty hard to avoid the wet tracks, but he’s been competitive all the way through.

“In The Galaxy he drew wide while in his other runs, in the TJ Smith, he was up against the elite sprinters, and I thought his run was absolutely superb. If he brings that run on Saturday, they won’t be seeing him.”