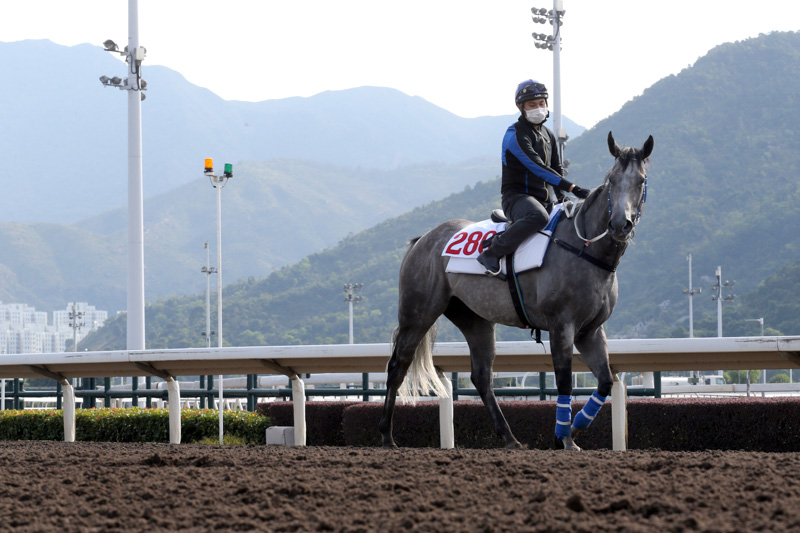 Classique Legend stands equal-fourth in the LONGINES World’s Best Racehorse Ranking with a rating of 125 – placing him at the head of the speed division together with Godolphin’s three-time G1-winning sprinter Bivouac.

And while the AU$8.63 million (approx. HK$48.7 million) earner has only been in Hong Kong for little over a week, he has done nothing but please his new handler Caspar Fownes.

“He’s got a great way about him, he certainly has a presence, I think he knows he’s a little bit special,” Fownes said. “He’s a proper horse and he certainly gives himself a chance to excel at the top-level, which is where he is at now. He’s rated joint-number four in the world now, so that’s a massive rating and equal highest rated sprinter with Bivouac.”

The six-time winner is currently completing a mandatory quarantine period, but is able to exercise on the track once the locally-trained horses have completed their morning trackwork.

“With a view to having him ready for the Hong Kong Sprint we kept him quiet while in quarantine in Australia, we didn’t want to take a chance to do anything on the track there while I wasn’t hands on there,” Fownes said.

“We’ll try our best to get him as fit as we can in the short period of time that we have and we’ll have a trial with him and see if we can have him cherry ripe for the big day.”

The grey was bred at the picturesque Tyreel Stud in Agnes Banks, just outside of Sydney. He is out of Pinocchio by Not A Single Doubt and is a half-brother to 1000m Sha Tin track record holder Aethero. The pair now stable together under the care of Fownes.

“You couldn’t be happier with the way Classique Legend is, his demeanour and the way he presents, comes out, and does his work – he’s very professional, he’s beautiful to deal with,” Fownes said.

From the sale ring, which he went through for AU$400,000 (approx. HK2.26 million), he then went to the stable of Les Bridge at Randwick and made a winning debut on the Kensington track there, and three starts later, he was a G2 winner, securing the Arrowfield Sprint (1200m).

He then, contested his first The Everest, finishing sixth to Yes Yes Yes in 2019, and returned in 2020 with a first-up success in the Listed June Stakes at Randwick. He added another G2 to his name, The Shorts, before a two and a half length win followed in the 2020 The Everest, defeating seven individual G1 winners.

“He’ll have to work home and have a blow out in his trial because it will have been two months between races, three months including quarantine as well,” Fownes said.

“It’s going to be tough but I’m accepting the challenge and I want to do my best in presenting the horse in as good a condition as I can considering what we have had to work with.”

The five-year-old’s programme will feature a barrier on the Sha Tin dirt prior to his HK$22 million first-up assignment.

Fownes’ immediate attention is upon Sunday’s (22 November) G2 Jockey Club races in which he has three horses entered for two of the trio of G2 contests, including Columbus County, who is entered for the HK$4.5 million Jockey Club Cup off the back of an eye-catching first-up win at the Happy Valley.

“This Sunday is a big step-up for him, he’s proving to me though that he has the ability to finish inside the top four even though he is out of the ratings, but the way he is, he doesn’t know what his rating is, he’s still well below where I think he is going to get to,” Fownes said.

The Redwood gelding was one of the main contenders going into last season’s BMW Hong Kong Derby (2000m), posting three smart runner-up efforts before a disappointing ninth in the blue riband to Golden Sixty. But he did close out last term with a strong win, his first in Hong Kong, in an 1800m Class 2 at Sha Tin.

This season, the bay has returned in excellent form and Fownes has big expectations for the New Zealand-import, who this time will pair with leading local hoop Vincent Ho.
“I’ll be hoping for a first four finish and he’s the type of horse who can run up to 2400 metres – we have something to work with,” Fownes said.

“He’s racing out of his skin, he’s racing really well, his sectionals have always been good and I just hope we can get a soft draw with him where we just don’t have to drag back all the time,” Fownes said.

“The old boy, you’d love to have a few of him in the yard: eight years old and he looks immaculate, and he seems happy and healthy. Obviously, it’s a small field against six others, so he’ll get his chance to show us what he’s got,” Fownes said.

“We are taking on the next superstar of Hong Kong in Golden Sixty, but it’s always interesting to see how close you can get to him!”