Ting’s Star shoots for Amazing five at the Valley

Happy Valley specialist Amazing Star is shooting for his fifth win at the city circuit this season when he faces off against talented rivals in the Class 2 Ho Chung River Handicap (1200m) on Wednesday night.

The Jimmy Ting trainee has relished racing around the Valley’s tight turns and has enjoyed a rapid rise, with four wins from five starts this season having doubled his rating to a career-high mark of 100.

A win on Wednesday would put the New Zealand-bred gelding in line for a tilt at Group races next term but three-time champion jockey Zac Purton is taking it one step at a time.

“I think he’s starting to reach his ceiling but he’s got a liking for Happy Valley and if he can break cleanly to have himself right up there, then hopefully he can continue on with what he’s been doing,” the Australian said.

The field of 12 features nine horses who have won this term for combined for 21 wins this season alone.

Amazing Star’s most recent win came in mid-March and he has since trailed once, to the satisfaction of both Ting and Purton.

“After his run in March there were no suitable races for him, so that’s why I gave him a rest, and also because the last two races he had were too close together. His recent trial was good,” Ting said.

Purton added: “He felt fine, he always trials well – it was a nice piece of work.”

A noted front-runner, the five-year-old will break from gate six with top-weight of 133lb on his back.

“He’s a little bit scared, that’s why he needs his space or to come from the outside,” Ting said.

“After this race we will see what we do next with him, we will see the form and the health of the horse and if the form is not so good then I may give him a rest until next season.” 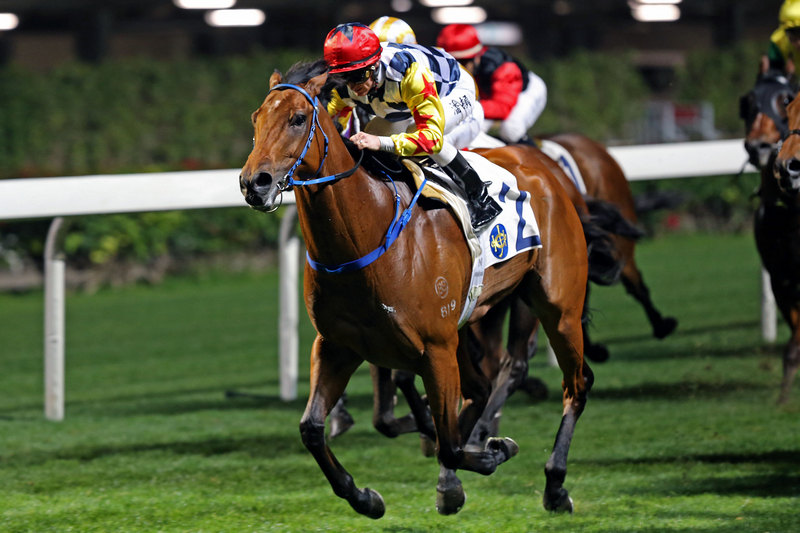 With only one Group race at Happy Valley and over an unsuitable trip for Amazing Star, his continued ratings rise could force Ting’s hand with a switch to Sha Tin.

“It’s hard to know how he is going to handle Sha Tin with the longer straight,” Purton said. “With the speed he has, if he can use that and get nice and handy and give a kick off the corner, Happy Valley obviously really suits him but a longer straight at Sha Tin with more pressure, it’s a completely different beast. He’s going to have to learn to adapt if he is to compete at Group level.”

Amazing Star isn’t the only horse shooting for five wins at the Valley: earlier on the card, Very Sweet Orange will attempt the same feat in the Class 3 Kam Tin River Handicap (1000m).

Up against Amazing Star, though, is another horse looking to improve on his already impressive record at the track: the Francis Lui-trained This Is Class (122lb) is searching for his fourth consecutive win but his first under Karis Teetan. The Mauritian takes the reins in-part due to the pre-booking of regular rider Vincent Ho, who this time rides Shining Gem (120lb) for championship-leading trainer Ricky Yiu.

“Vincent was booked for Shining Gem and I was supposed to ride Waldorf but that horse got reserved so I was looking for a ride, and, thanks to Francis, I’ve got a nice pick-up,” Teetan said.

“I rode him in track work yesterday (Monday), it was my first time sitting on him and he seems like a very nice horse, a smart horse. He did his work nicely and I think he’s stripped fit and ready to go.”

This Is Class will break from gate 11 and Lui is respectful of the competition his charge will face.

“The horse is ok, I just worry about the draw at Happy Valley, you always need a good draw; his last run was from an outside draw but this time the field is different,” the handler said.

Meanwhile, Ho is hoping for a fast pace as he shoots for back-to-back course and distance wins on Shining Gem.

“I think the pace should be on and last time he won well, he showed a really good turn-of-foot; he’s had quite a few runs this season but it isn’t a problem,” Ho said.

Golden Dash is hoping to put injury interruptions behind him when he contests the Class 3 Lam Tsuen River Handicap (1200m).

The galloper, lining up for only his 12th Hong Kong start since his Hong Kong debut in January 2018, has been forced to overcome numerous setbacks, most recently a suspensory issue in his right front leg, which kept him away from the races between June last year and April of this. Purton has paired with him for two wins and hops back in the plate.

“He had a long time off, he’s come back and he’s been racing really well; hopefully he’s taken a bit of benefit out of his last couple of runs,” Purton said.

The Snitzel gelding will break from gate one against a field 11 as he searches for his fourth win.

“He doesn’t have to improve much more to win, so if he can just take that next little step then the horse has a chance,” Purton said.

The Australian ace partnered the five-year-old in two pieces of trackwork this week, firstly on the dirt then Monday on the grass.

“He felt fine in his work, so there’s no problem there,” Purton said.