Tilsit (Charlie Hills/Ryan Moore, 10/1) landed the G3 Bonhams Thoroughbred Stakes, run over a mile for three-year-old's at Goodwood on Friday.

The winner, a colt by First Defence, began to make progress three furlongs from home. As he entered the final furlong, he hung significantly towards the rail, hampering My Oberon (William Haggas/Tom Marquand, 3/1). Tilsit kept on well despite hanging, coming out on top by a length and a half from My Oberon. The placings were unaltered following a stewards' enquiry. 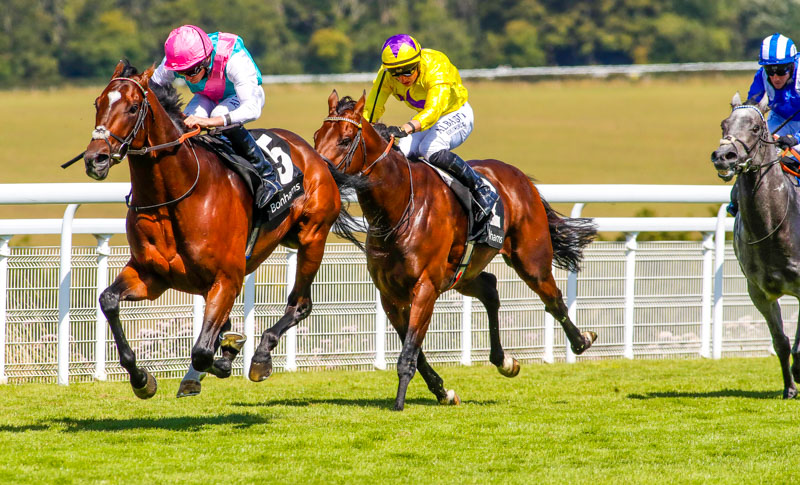 Charlie Hills said: "Tilsit has done so well. He had two runs at Newcastle which is a completely different track to Goodwood and it was his first start on turf - he has really stepped up.

"It was a good step forward really. He has beaten two very nice horses. We knew coming into today that we would know where we would stand after the race and we are all very excited now.

"Tilsit has come a long way. The guys at home have done a great job at home and Will Kennedy [jump jockey] has been coming in most days to ride and he has done a fantastic job. A lot of thought has gone into this horse.

"We'll see how he is tomorrow morning and go from there - we could maybe come back here for the Celebration Mile."

Lord Grimthorpe, racing manager to owner Khalid Abdullah, said: "That was a huge step forward. Tilsit has to mature, as he is still very babyish really. You could see that slightly in the paddock beforehand, but he was much better than he was the previous two times. And in the race he has handled it pretty well, but he did wander a bit, no doubt about that. He has some talent, no question. I think fast ground is the key to him, as well. I think he is still a bit goofy and immature.

"I wasn't at all optimistic we would keep the race [following a stewards' enquiry]. He was the best horse, no doubt about that, but it always worries me. Ryan [Moore, jockey] had his whip in his right hand, so that was good, and he has just dived in. He was always going to win, so from that point of view the rules are spot on, but it is always a nervous moment.

"This was Tilsit's first race on turf and so therefore again it's part of the learning curve for him, but he is pretty progressive by the looks of things. Yes, the Celebration Mile here could be a possibility; it is always nice to have a few thoughts about where we go and what to do, but he looks on an upward curve. Trip-wise I think we will stay at a mile."

Tilsit is first-past-the-post on his turf debut in the Group 3 @bonhams1793 Thoroughbred Stakes for Ryan Moore and Charlie Hills.