Punters were dealt an early blow when odds-on favourite Ghaanati had her colours lowered by long-shot Thron Bone at Caulfield.

Ghaanati looked to throw the Neds Punters Toolbox Handicap (1100m) away on Saturday when she ducked out badly near the 100m mark. Jockey Brett Prebble was forgiving of the filly saying the race did not pan out the way he and co-trainers Peter and Paul Snowden had hoped.

“She’s very new and that’s why Pete wanted to bring her here around the turn,” Prebble said. “It would have been lovely if the race had panned out a bit different. I was hoping for more speed from out wide and they might have crossed her, but they didn’t.

“I was left sitting there and she didn’t have anything to guide her along. She saw the big screen and took fright of it, but she’s a good filly, still immature with lots of upside.”

Sent out the $1.80 favourite on the back of her debut win at Flemington on June 4, Ghaanati was run down late by Thron Bone ($21) suffering a three-quarter length defeat. Debutant Hoofs Don’t Lie ($26) flashed home late out wide for third, 1-½ lengths further back.

Thron Bone was having his third start on Saturday, after starting his career in summer with a fourth-place finish behind Daumier in the Blue Diamond Preview at Caulfield. Trainer Jerome Hunter said greenness had stopped the colt from racing on during the autumn.

“He showed a lot of promise in the autumn, but he was just a bit too immature, so I gave him a little break and I thought we’ll try and get a race in the winter, and it’s paid off,” Hunter said.

“The best part is he’s still got a lot more to learn, he had his head up and still raced a bit green. Once the penny drops, I think we’ve got quite a nice horse.” 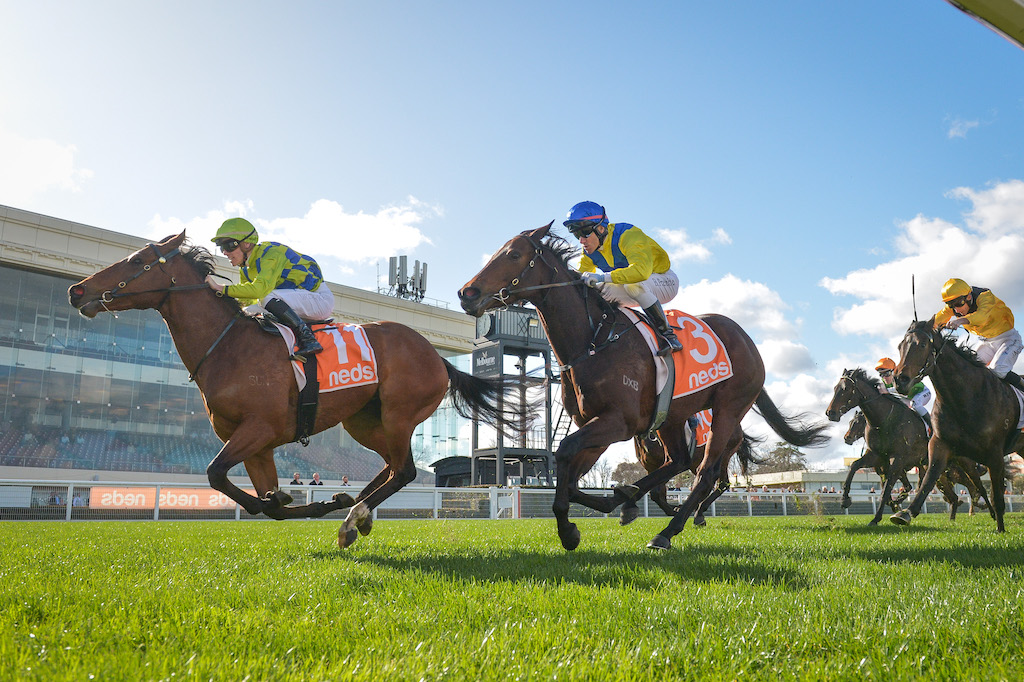 Thron Bone gets the better of the wayward Ghaanati at Caulfield, picture Racing Photos