It takes a special three-year-old to tackle a Group 1 handicap during the spring and Cranbourne training partners Trent Busuttin and Natalie Young believe they have that galloper.

Tagaloa is set to tackle those older handicappers in the $500,000 Group 1 Sir Rupert Clarke Stakes (1400m) at Caulfield on Saturday.

No three-year-old has won the race since Exceed And Excel in 2003 while other horses of that age to have won the race include Testa Rossa (1999) and Encosta De Lago (1996).

And Tagaloa will need to prove himself the equal of Our Maizcay (1995) and Manikato (1978) if he is to win on Saturday and then go on to capture his main three-year-old assignment, the $2 million Group 1 Caulfield Guineas (1600m) on October 10.

Busuttin has no doubt the colt is up to the task and is eagerly looking forward to Tagaloa’s first try at 1400m.

Even though Tagaloa was successful in Victoria’s premier two-year-old race, the Group 1 Blue Diamond Stakes (1200m) at Caulfield in February, Busuttin has always stated the colt would be a better three-year-old and even better over a longer trip. 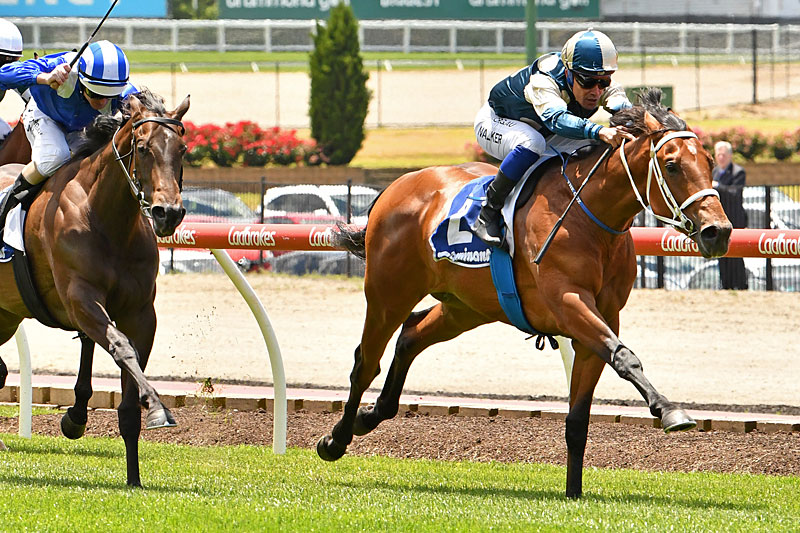 A son of Japanese sprinter Lord Kanaloa, Busuttin said Tagaloa has developed into an outstanding colt and has taken a lot of benefit from his first-up third in the Group 3 McNeil Stakes (1200m) at Caulfield on August 29.

“He worked up fantastic this morning, had a good solid hit-out and he’s really let-down into a big strong horse now,” Busuttin told RSN927.

“It’s his first time at seven furlongs and I think we’re all looking forward to that.

“We want to draw a soft barrier and let him travel for three or four furlongs (600-800m) in the race.

“Through circumstance he’s been the one outside the leader and chasing or doing the work and it would be nice to take a sit on him in fifth or sixth and see a turn of foot.”

Busuttin said he expects last year’s winner Begood Toya Mother to run along at a solid tempo which should spread the field out.

“He (Tagaloa) has only 54 kilos on his back which is a big plus so if he gets a nice run in the race he should be able to be in the right spot and be attacking at the right time,” Busuttin said.

“Over the 1200 metres the other day he didn’t get a chance to travel at all. He was three-deep into a tough breeze the whole race and he didn’t get the chance, even for a furlong, to get on the bridle and relax.

“Over 1400 metres and 1600 metres, that’s when you want to see him travelling and that’s when he’ll show his turn of foot and attack the line over those longer trips.”

Tagaloa currently shares the fifth line of betting for Saturday’s race on TAB Fixed Odds with Cascadian at $11.

Perth visitor Showmanship heads the all-in market at $3.50 ahead of last start Group 1 Memsie Stakes winner Behemoth at $5 with Superstorm ($8) and Buffalo River ($9) next in line.

The final field of 16, along with emergencies, and barrier draw will be announced on Wednesday.