TAB’s Andrew Georgiou wraps up the weekend action and looks forward to another big week of racing.

Godolphin were the punters’ pals and TAB’s worst enemy on Saturday.

The heavily tried pair of ROHERYN and KORDIA landed a number of big bets and multis at Rosehill and we have to give honourable mentions to ORCEIN ($11-$4.80) and LUCIFER'S REWARD ($101 on Wednesday, $31-$18 on the day) which landed long-priced plonks at Rosehill and Caulfield respectively.

FRANKELY AWESOME ($34 on Wednesday, $17-$11 on the day) was another to get up after decent support at a price in the McKell Cup and was tipped on top early by Sky Racing form guru, David ‘Gator’ Gately.

HARBOUR VIEWS was the best backed runner across Australia over the weekend but unfortunately couldn’t get the job done at Caulfield.
Crunched into odds-on at one point, Harbour Views jumped $2 fav and held 75 percent of the money in the eighth event on the card. Some of the bets that went down the drain included $10k and another $7k both @ $2.

“I told Tommy to make sure you let him know who’s boss behind the gates.”
Trainer Kim Waugh to jockey Tommy Berry prior to winner TRUMBULL lining up in the Civic Stakes.

“We were having doubts as to whether she wanted to be here or not, however, the wet going will give her every chance to be competitive.”
Trainer Kris Lees on Frankely Awesome prior to her win in the McKell Cup. 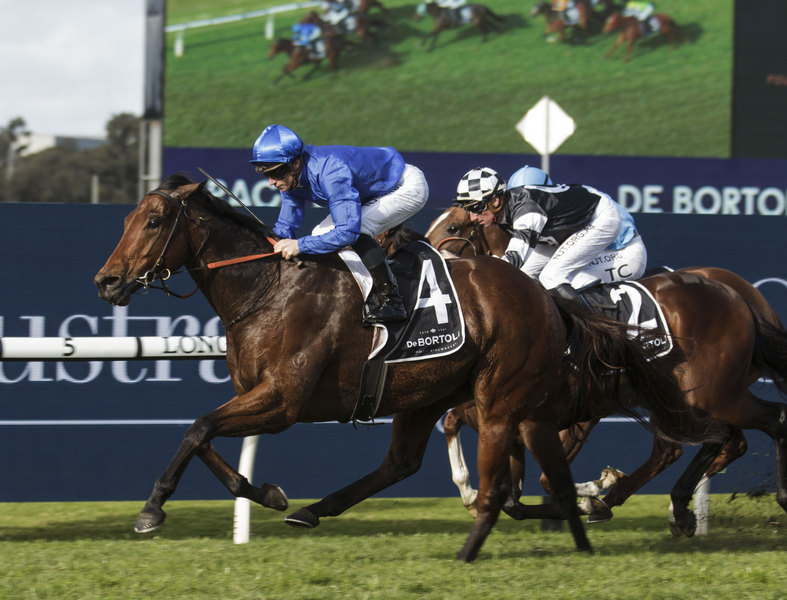 Bang - Roheryn and James McDonald, one of a treble for the leading rider, picture Sportpix.com.au

“He’ll have to be good to win from there.”
Sydney caller Darren Flindell as Roheryn was several lengths off the leaders on straightening in Saturday’s De Bortoli Wines Handicap at Rosehill.

“Roheryn BANG! What a performance!”
Flindell again after the Godolphin gelding rattled home to salute.

IN CASE YOU MISSED IT

Yes, this column is mainly thoroughbred-based but do yourself a favour and catch GOOD JUAN’s win at Wentworth Park last Saturday night. It had to be seen to be believed!

Check out the race below on Sky's Twitter feed

ALFA ORO’s progress through the grades continued on Saturday with an ultra impressive victory at Caulfield and that is four straight wins now.

MONEGAL has shown a liking for the wet tracks in winter and ran right up to her big upset win a fortnight ago with another good effort on Saturday. Only the well tried Orcein got the better of her thanks to a lovely rails-hugging ride from Brenton Avdulla.

COMING UP THIS WEEK

It's Finals Day at Flemington on Saturday and we head to Royal Randwick for a bumper nine-race card. Eagle Farm plays host to the Bright Shadow and Tattersall’s Club Stakes while Saturday’s racing in the west also presents the Belmont Oaks and Aquanita Stakes as the features. Don’t miss some great midweek racing from Royal Randwick and Doomben on Sky Racing and the Sky Racing Active app.

For all the latest TAB Futures markets click here.

He's no stranger to epic finishing bursts but tonight's performance from Good Juan has to be seen to be believed 😱 pic.twitter.com/3TH9sU9hCR