#2 Iron King finds himself back in Class 5 and at the scene of his two career victories. Zac Purton also reunites with the Dennis Yip trained runner and together their a formidable combination. The draw is perfect and despite recent form reading only fair, this is his race to loose.
#1 Whiskey Neat remains a maiden after thirty six starts but has the gate speed to cross and lead this race. He has been an honest campaigner for most of his career and the drop to the easiest class is richly deserved. With moderate opposition doing the chasing he could well take catching, so I would give him a genuine winning chance.
#3 Melbourne Hall has likewise found himself in the lowest class for the first time and shall equally benefit from the moderate opposition. The record at Sha Tin is a worry but he is racing well and excuses are relevant his  past couple. The draw allows him to follow Whiskey Neat across the face of the field early, and if he manages that he is a chance.
#10 Moon Peaks also looks a solid chance if he brings his A-game to the track. He has got the right stats to win this race, plus, a jockey aboard that responds well to his commands. A recent run over the mile can also assist his attack at the line as he returns to 1200m.
#6 Earnest Feeling probably should have won by now but often finds trouble in running. The drop back to 1200m can be a blessing because it will create a solid overall race speed. He is best when he works his way in to a race during the second half, so if he stay’s in touch he’s a potential threat.

#5 Right As Rain looked a good thing beaten last start and appears one of Purton’s best chances on the card. He remains very green, and for that reason slightly vulnerable, but at the same time should take all the beating. Now that Purton has had a couple of rides under race pressure they should be getting it done.
#10 Lucky Missile has produced an excellent seasons work with two wins and multiple placings. He is elevated to a high rating but conversely is displaying signs he is still improving. The change of track appears a prudent decision, now he is progressive, and I expect him to be right in the finish.
#1 Born The Same Day finished second the last time he raced over this course and distance. The other positive worth highlighting is that it was in Class 4 and from a similar draw. The gate today confirms a guaranteed economical run in transit and he must be considered.
#8 Super Hong Kong has enjoyed a superb season and is ideally placed to run well. He has shown in the past he responds to more patient rides, than aggressive, which is hopeful the tactic today. He will need to lift to an all time high if he is to win, but I am not prepared to say he cannot.
#11 Vukan looks awkwardly drawn but I do not mind him out wide over the 1800m course. He will gradually work his way across, unimpeded, and take up a forward position, if not lead. His last two runs have been solid and he thoroughly deserves his position in the tips.

#10 Amazing Teens has enjoyed a very profitable first campaign of racing and is a great chance to win again. Plenty is in his favour against similar opposition and he is far from the finished product. All his race results point to the All Weather track being his forte and that is where he is racing today.
#1 Apache Pass struggled with the rise in class and change of surface last time out but is worthy of forgiveness. He will be far more comfortable on the dirt, plus, regular rider Derek Leung is back aboard.
With an increase to 135lbs, due to the 85-60 rating span structure of the event, he could possibly struggle to lift his legs.
#4 So We Joy is relatively fresh compared to most and another who has strong claims. The Chang yard had a winner on Wednesday night, and with only 12 wins accumulated for the season, they are desperate for more. Vincent Ho atop from the excellent draw creates optimism and if the price is right, he will be the horse to play.
#12 Handsome Twelve was superb in victory last start and gave the impression more wins are install. He is bred to enjoy the dirt surface and we will find out more about his future, following this performance in the higher grade. It is highly likely he is above average so include him in all your exotics plays.
#6 Ultra Express is poorly drawn but with luck can run himself in to the frame. He has become well rated, is close to peaking, and also handles this track and surface well. The 3lbs claim is another little advantage that entices his inclusion, but, he is going to require a perfect ride. 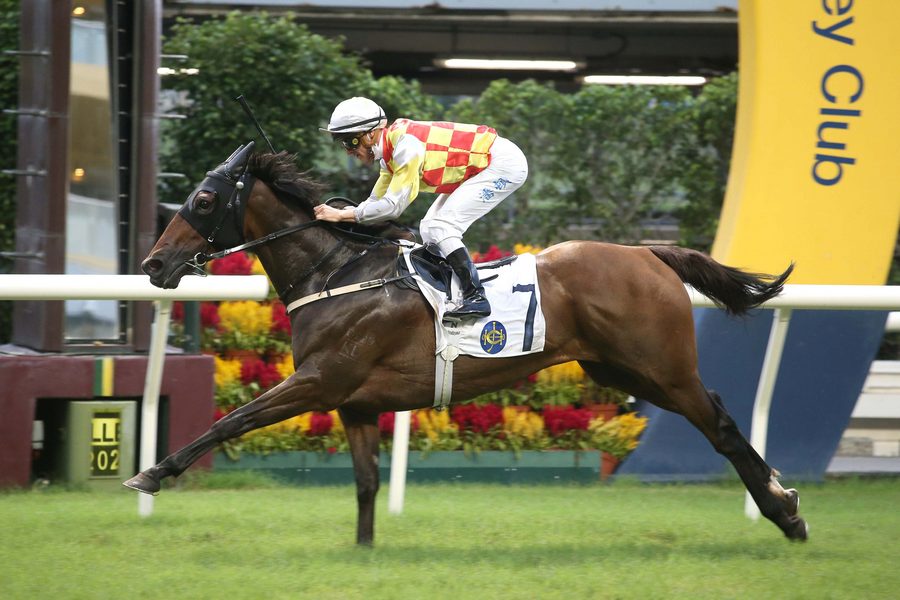 Zac Purton has the chance to take over the lead for the Jockey's Championship on Saturday with Joao Moreira not riding, picture Hong Kong Jockey Club