#7 Run Des Run was involved in a change of stable during the off season and has subsequently returned a better horse. He accumulated an additional 60lb in body weight during that period and now weighs in as the heaviest beast in town. A dominant winner first up that stays in the grade should be winning again and provided he is given his room to move that should be the case.
#6 El Valiente is well entrenched in Class 5 company but extremely close to braking the ice that surrounds his maiden status. His two recent efforts over this course and distance have been honest and worthy of victory so it is just a matter of when he wins a race. Moriera knows him well and from the draw they can trail the speed in effortless fashion. On paper the pro’s and con’s suggest this race is his to lose.
#3 Run Run Good has shown a liking for the All Weather surface which is no surprise given the American bloodlines on both sides of his pedigree. In the past he has struggled with the longer races but conversely he has not tried them on dirt. The way he is finding the line at 1200m suggests the 1650m should suit but Moriera has opted against holding the ride.
#2 Crown Avenue has almost accumulated 1 million USD in prize money and the bulk of it earned on this track. His form can be patchy at the best of times however with the blinkers refitted recently his disposition has again sparked. The draw is horrid but he is more than capable of running well under most circumstances.
#11 Speed Force was tipped early on this season but quickly barred following some average performances. Trainer Michael Chang has now realised the All Weather track is his forte. Matthew Poon has also been able to extract consistency from this lowly rated galloper and therefore he must be considered.

#3 Captain Win arrived in Hong Kong with a decent reputation and it is easy to see why. He is a brute that possesses a high level of ability and a superb turn of foot. His closing 600m last outing was enormous in a race dominated by horses on speed. The mapping today suggests this event is also likely to favour those on speed but I anticipate he will be closer in the run. A huge amount of improvement is set to follow his brilliant and recent trial and a registered win today makes the Classic Mile a genuine option next start.
#4 Rise Brethren pulled up with mucus following his December debut and was then slow to jump at his following start. The former Joseph O’Brien runner was a smart 2yo before being very handy at the age of three. The Britannia Stakes has a long history of producing A-grade Hong Kong gallopers of the future and this fellow finished second in 2021, against an opposing field of 29. He is another progressive galloper headed north in the ratings and the Classic Mile and 4yo series are on his radar.
#9 Sight Spirit received a hammering from the handicappers with an 11point hike following his strong last start win. He did receive all favours leading at a slow speed before kicking clear to win in slow time. The rise in class and distance combined shall be tougher this time out but he is rapidly improving.
#1 Soulmate has returned in fine form this campaign after being kept in work during the off season break. The former undefeated three-year-old Kiwi looked common at first glance but has since improved noticeably and is now looking highly progressive. The speed maps have him dictating and with a 5lbs claiming rider aboard and he should take plenty of catching.
#12 Ezra also rises in class following two wins from his past four starts. He has hit a purple patch of form lately and despite this class being beyond his capabilities previously the 1600m is his right journey. It is a struggle to envisage him winning but I would keep him safe via exotics.

#2 Lucky With You is an exciting prospect and three dominant wins from four career starts highlights his potential.
The rise in journey to 1400m appears suitable but the additional 10lbs is going to test. Add to that a handful of opponents that also like to be in charge and reasons to be concerned are prevalent. However, I have faith he can adjust and possibly take a sit but I will not be taking an unreasonable price.
#4 Romantic Warrior has taken all before him winning three of three and now steps up in journey. The rise in trip is going to test both these young horse and I am wary of what to expect. Both are highly progressive and likely to dominant this average Class 3, but with the rail out and a frantic speed likely cracks could well appear.
#7 All Beauty had to overcome difficulties through the first half last race but was still good enough to win. He has made significant inroads since the off season break and is far from the finished product. I like his instant acceleration when asked to dash and with luck from the awkward draw he will be in the finish.
#1 Beauty Fit has been going around in better races this season and the drop in class and good draw are reasons to consider him a player. Both wins have come over the Sha Tin mile so he will give away a start from the low draw but be rocketing home. He is super fit and the expected hot speed is what he will want so he is worthy of keeping safe.
#12 Perfect Pair is going to secure a lovely run back of the speed and should be considered. This is his course and distance, as his record suggest, but the class statistic is a defining piece of evidence. With zero wins from 17 starts you should be backing others ahead of him to win. 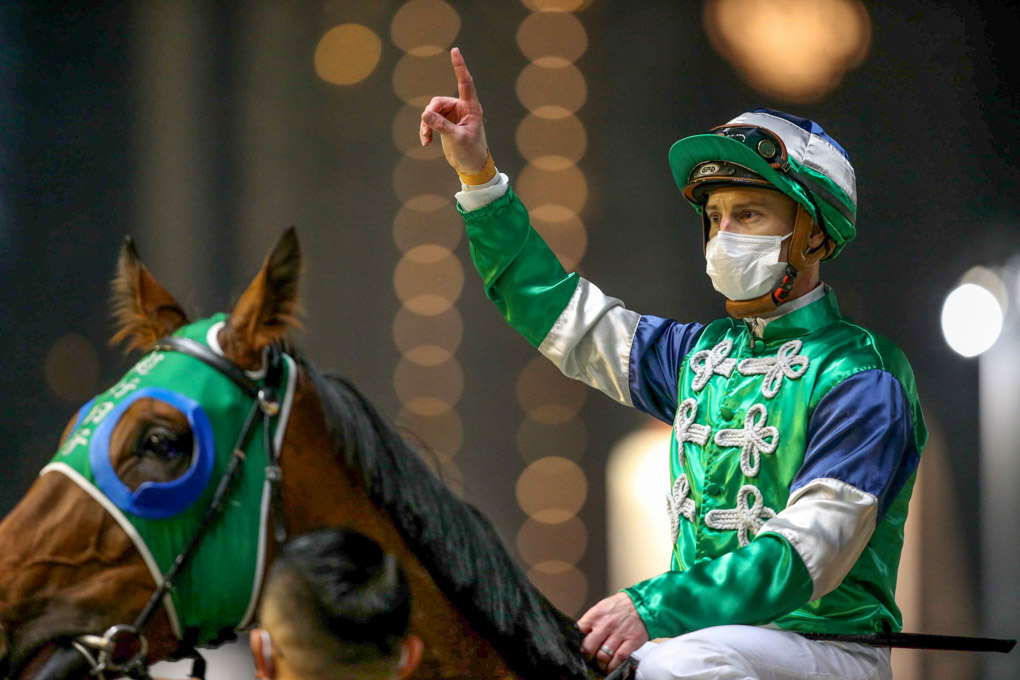 Zac Purton at Happy Valley on Wednesday night after his first win back riding after his injury enforced time on the sidelines, picture Hong Kong Jockey Club