It is a 10 race blockbuster at Sha Tin this afternoon with the traditional lead ups, The Jockey Club Sprint, Jockey Club Mile and Jockey Club Cup, the feature races.

The three Group 2 events are vital to local Honk Kong trainers as they continue preparations towards Hong Kong’s show piece to the world on the second Sunday in December.

The selection process for the Turf World Championships takes place over the following week and any owner, with a half chance, understandably wants their pride and joy selected.

The Jockey Club Sprint appears a race of many hopes and luck shall no doubt have its say at some point before it IS eventually decided.

The Jockey Club Cup is likewise an even contest, to some extent, with a strong performance crucial by local runners as high quality hard core stayers from around the globe are expected to dominate the invitational list for December.

The Jockey Club Mile however is the race everyone is chatting about with the return of Golden Sixty to the racecourse.

A remarkable 17 wins from 18 starts, four Group 1 wins and a potential 15th consecutive victory alongside a profile picture is enough to tune in and be excitingly involved.

#9 Courier Wonder suffered his first career defeat in the traditional opening lead up for the sprinters the Group 2 Premier Bowl. It was by no means a thrashing and a close watch of the reply reveals his luckless journey down the home stretch. The question remains however was he going well enough to win had clear running presented. It IS an arguable and debatable topic with differing opinions certain but there is no doubt he is entitled to another opportunity. His track work and two barrier trials since have been excellent and todays draw should be to his advantage. The sprint looks as open as I have seen but if wraps are accurate and luck is present in running he should be capable of putting most opponents away.
#2 Wellington has the score on the board after his dominant win in the Group 1 Chairman’s Sprint Prize at set weights. He must deal with a 5lbs penalty for that win and has been dealing with a lameness issue to his right hind. This ailment has postponed his reappearance and the aforementioned combination creates hesitation around his recommendation. That being said two trials in terrific fashion have been witnessed and he is undefeated first up.
#6 Stronger gives away a start and gate 2 looks potentially awkward but he is definitely a genuine winning hope under the right circumstances. He meets most runners better at the weights from the Group 2 Premier Bowl where he produced an outstanding last 800m on the clock. The pace appears good from the outset which he desperately needs and if jockey Vincent Ho pulls the reigns right he will weave through the later stages hunting for the win.
#8 Super Wealthy has come along way since the move to the David Hayes Stable and could not be going any better. He must carry 4lbs more with the move to set weights but has a terrific draw in gate 5. The 1200m was a big question mark going to the Group 2 Premier Bowl but he coped with it particularly well. Despite his recent hike in the ratings I will not be surprised if he continues finding improvement going forward.
#7 Lucky Patch has been aborted by Zac Purton following a brilliant display in the Group 2 Premiere Bowl. A consistent performer in last years 4yo series it seems the transition back to sprinting is being justified. The longer races of the 4yo series have toughened him physically and his finishing burst last outing was brutal. It is likely he will be caught deep from the draw but clear galloping room is the advantageous offset.

#1 Golden Sixty makes his long awaited return to racing after a seven month break and the anticipation brewing around Hong Kong’s champion is electrifying. If your wondering what he has been up to in the interim, ground hog day comes to mind, with trotting and swimming on the menu most days. No either lush paddock at Conghua or sandy beach water to wade through have been experienced, he has just kept ticking over quietly at Sha Tin, although, he did go missing mid July for 12 days so perhaps respite was enjoyed. Nevertheless trainer Francis Lui has lifted his work load over the last three months and he is now literally bursting at the seems to get back and race. The three barrier trials he has won have been superb and if he is to go under today either fitness or preparation excuses could not be offered.
#5 Sky Darci won the Derby in March and returned fabulously well first up when finishing third in the Group 3 Celebration Cup. His run in the Group 2 Sha Tin Trophy following was disappointing, regarding finishing position, but the second up syndrome and tactical nature of the race went against him. It is his first crack at Hong Kong’s Horse Of The Year Golden Sixty and he is in good shape for the challenge now third up. The bonus and slight advantage he has is Golden Sixty must carry the 5lbs penalty, so conditions are in his favour.
#4 More Than This is an extremely talented individual who is not far off Golden Sixty at his best with his courageous second in the Group 1 Champions Mile in April highlighting that very fact. Where he loses races at the elite level is out the gates and through the first half as he struggles producing initial ground speed. His closing sections have never been questioned and he is a winner previously first up. I will be watching closely for him through the last 200m when he has fully wound up.
#2 Waikuku returned with a satisfactory effort in the Group 2 Sha Tin Trophy following a long lay off due to post-race blood in the trachea last April. The two time Group 1 winner is as good as they come on his day and boasts multiple victories over former Super Star Beauty Generation. He has looked good around the trial track on two occasions since his last start with Zac Purton the man aboard.
#6 Champion’s Way could have won the recent Group 3 Ladies Purse when he was baulked at a vital stage in the race. With more fitness under the belt this campaign than any other runner endurance shall be on his side with the return back in trip. The draw looks ideal to secure the economical run and he will have his chance when it counts.

#4 Glorious Dragon has continued to furnish the last 12 months and appears one of Hong Kong’s best staying prospects. He will be cheery ripe for International Day in December and with that in mind must run well today.
He has had an array of different riders throughout his career but it seems since the retirement of Exultant he is Zac Purton’s choice going forward. He was particularly stiff in the Group 3 Ladies Purse and is likely to atone.
#3 Columbus County got moving a long way from home in the Group 3 Ladies Purse and then had the air knocked from his sails after straightening. He tired in the run to the line and no doubt slept well that evening.
He is a battle hardened stayer that shall appreciate the up in distance and I am not jumping off him just yet.
He’ll receive the run of the race according to my speed map and conserve energy until it’s fully required.
#6 Savvy Nine has been a long time favourite who was thrashed during his first season of racing having 12 runs in 7 months. Now under the care of Douglas Whyte and with an off season rest enjoyed I am expecting him to blossom once more. Class at this level has been beyond him to this point but after a superb run at The Valley last start I will give him another opportunity to step it up.
#1 Panfield was terrific first up winning the Group 2 Sha Tin Trophy and has seemingly done well since. He must endure the 5lbs penalty today for his Group 1 win last season plus an additional 4 point hike in the ratings. Couple that up with a potential second up syndrome effect, a history of roaring and I am happy enough to take him on for the win. He has been an outstanding performer over the course and distance but I feel he will be up against it today.
#5 Russian Emperor is one of the most interesting runners of the day and catches the eye. As a three-year-old he won the Hampton Court Stakes at Royal Ascot over a similar journey and was brave in last season's Hong Kong Derby behind Sky Darci at this trip. Douglas Whyte himself has been aboard all track gallops recently and I would access that as an extremely positive sign. We will learn more about him at set weights following this event but he has got a big engine and it should be respected. 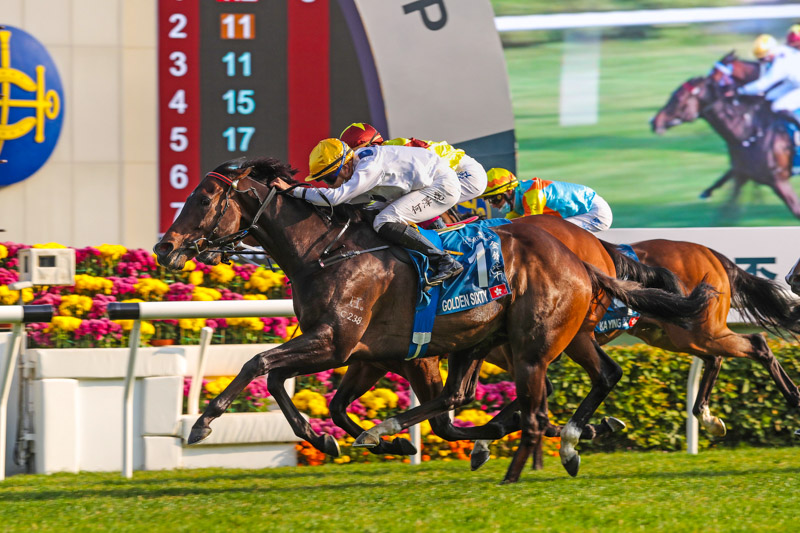