#6 Owners’ Star has just the one win to his name but he is in good company down in Class 5. His lonesome victory came over 1800m in October 2019 off a rating of sixty five and in Class 3. The reasons behind his costly racing record since are debatable but a change in stable this season has brought about some improved focus and effort.
With clear running last start he would have finished much closer so the rise to 2200m is likely to be beneficial.
#5 Jolly Forever has already proven that he would run all night if allowed so the 2200m suits him perfectly. Matthew Chadwick almost got him home two starts ago and he jumps back aboard. He will need some luck through the first 400m to slot in and gain cover, but if he does, he is the most difficult opponent to beat.
#4 Fortune Patrol has built a successful relationship recently with Brazilian jockey Ruan Maia winning two of his last three. Like most in this grade once they find form they can hold it if they stay in the class, which is exactly where he is at. The draw should not be a huge drama as he will get back and the quicker they go throughout the closer he will finish to the winner.
#1 Passing Fashion ran his best race when finishing fourth last start and the drop in to Class 5 is what he is craving. From the wide draw it is likely he will jump quickly then look to secure the lead before attempting to control. If he is left alone he will take a stack of running down, however, it is a common sight these days to see something emerge mid-race and mess up the leaders aspirations.
#10 Fortune Triple is edging close to forced retirement and if he does nor run a race shortly he will be below the required handicap rating threshold. He showed us two runs back that he is capable of winning over the longest journey available and can therefore be considered. If jockey Derek Leung secures the run of the race from the draw in gate six he is a contender.

#7 Winning Icey has been competitive without winning so far and a 5lbs claim is tonight being utilised to assist. His mid race sectional on debut over the 1000m was excellent and he followed that up with an encouraging run over 1200m. He has nice potential and scope this youngster and should be followed with confidence whatever the outcome tonight.
#2 So Awesome has been consistent all preparation and from an ideal barrier can claim one more win this season. He is currently at a career high rating of fifty five points but his win in February suggested he is not at his final handicap just yet. Excuses at his next two are justified due to poor gates and subsequent tough runs but he appears good to go from gate number five.
#4 Starry Night makes his Happy Valley debut following three encouraging efforts over 1200m at Sha Tin. Zac Purton has invested plenty of his time in the 3yo’s development and is once again booked for the ride. On paper he will have these covered for early speed and with improved race fitness will not be easily caught.
#9 Excellent Peers is having his first start for the new stable of Frankie Lor and Moreira has jumped in to lend a hand. The pair got together for a trial at Happy Valley at the end of April which was graded as a quiet and leisurely morning gallop. A patient ride appears the likely tactic and respect is warranted on his previous form.
#1 Smiling City is the last start winner who is going to need luck. The inside draw was a huge advantage when winning but barrier nine is unfortunately not as pretty. Combined with top weight of 133lbs and the task at hand becomes more and more unenviable. They will be desperate to lead but it is difficult envisaging another win with the aforementioned hurdles to overcome. 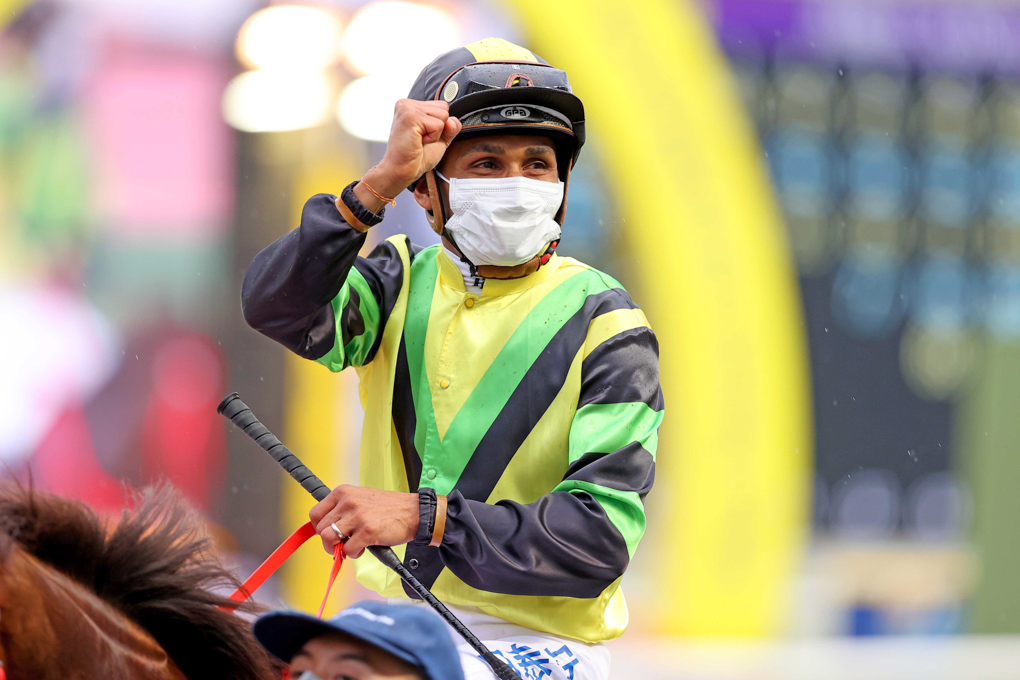 Karis Teetan after one of his four winners at Sha Tin on Sunday, picture Hong Kong Jockey Club