#1 We The South is the expected favourite in the first of the night and it is a justified call with questions hovering over many of the remaining opposition. All efforts this season have been competitive and his record speaks for itself over tonight's course and trip. A good barrier with Moriera on top and it appears there will be no excuses offered, so it is potentially just a matter of going through the process and hopefully getting the job done.
#7 Seize The Moment put together an encouraging effort behind the very talented Cordyceps Six on debut. Moriera was aboard on that occasion and has opted, it would seem, to jump back on the top weight We The South. He has got it wrong before and there is definitely plenty to work with going forward with a five-year-old late bloomer like this guy, but I would be guided by his better judgement. He is not often wrong in this situation but it shall be interesting, nevertheless, to see the margin between them when the judge calls a stop.
#4 Brilliant Fortune was looking a high quality conveyance once he initially got going but has flattened out rather quickly.
He has had more than adequate chances to grab a victory but a lack of stamina in a finish has cost him most of the time. He will run a big race dropping back from 1200 to 1000 but you will be feeling for your ticket through the last 100m.
#2 Ginson was a handy youngster in Australia that raced under the title of Rulership when trained by Tom Dabernig and Ben Hayes. He finished second in a Blue Diamond Prelude, amongst other strong performances at Group level, and is the interesting inclusion in this race tonight. The three barrier trials leading up have been adequate/good with the first conducted here at Happy Valley. His fresh record is solid and if the paddock report on the night regarding fitness/behaviour is positive then he will probably win.
#5 Spontaneous has been out of form all three runs this term but I am interested and believe he will run better tonight.
He showed plenty of scope last season winning three and with the tongue tie applied and a return to 1000m I am expecting him to run much better.

#9 Charizard has not won a race since the 23rd of June 2019. I know that for certain because I called the almighty win at Sha Tin when he charged home from down back. How he has not won again is baffling but his honesty cannot be questioned with 11 top five finishes since. He has now eventually regressed to the bottom of Class 4 and has returned this season with a pair of hearty performances. With Luke Ferraris again riding for father David it could well be his time to wind back the clock.
#2 Loyal Baby has looked good his last couple and shall roll forward looking for the spot outside the lead. He may even receive one by one cover heading to the back as others push on wider out. From an advantageous position as such there will not be many excuses to fall back on once they push for the judge.
#3 More Than Enough did not cope well with the low draw last start particularly after a sluggish jump from the gates. I am prepared to give him another opportunity and do not mind the wide draw because he appreciates rhythm and room. He will be caught deep for a portion early on before pressing up towards the lead. A fast run race suits him far better than a sit and dash.
#10 Laputa is immature and still finding his feet but makes his Happy Valley debut tonight. Vincent Ho has done a lot of work with this lad since he arrived and to be fair not much has gone right during his runs. He will be looking for the extra ground and could well be the big improver if he handles the track.
#7 Ernest Feeling has been hot and cold but is definitely capable of winning in this grade. A decent bump halfway around did not help his cause last start and Purton is obviously prepared to give him another go. With five minor placings already accumulated its only a matter of time before he wins and a strong tempo to run at suits him best. 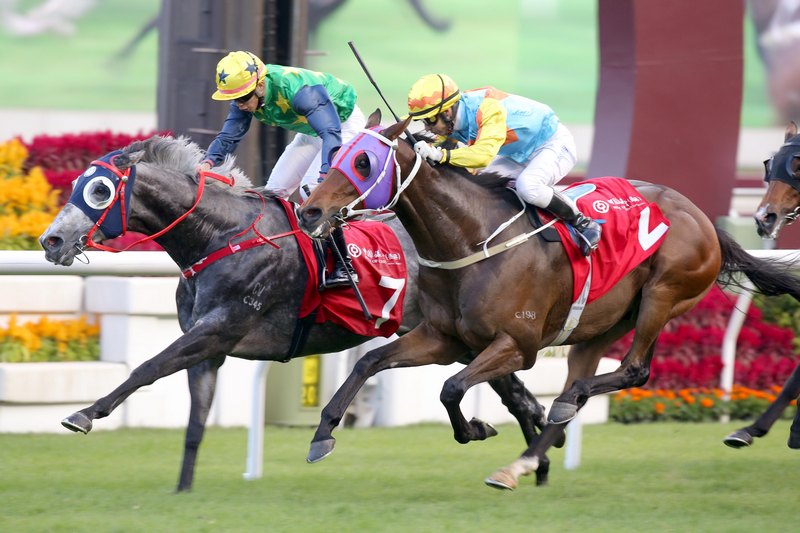