The Banker works on where to start with the Flemington action

The weekend is upon us and the tips are coming thick and fast. Sky Racing’s, THE BANKER, has you covered with a preview of all the action in the coming days.

With AFL and NRL seasons completed the focus of the nation is on horse racing and what better time is there than the four days of the Melbourne Cup carnival at Flemington.

The carnival kicks off on Saturday for one of Australia’s most prestigious race events, Victoria Derby Day.

COVID-19 has had an impact throughout the year with crowds barred on course at Victorian meetings from mid-March, but that has not impacted the success of the racing industry which has pushed ahead without a hiccup.

As was the case for the Caulfield carnival and the two-day meeting at Moonee Valley, there will be no crowds at Flemington for the four days this year.

No crowds on course may take away from the spectacle, but the action promises to be hot on the track and Saturday’s meeting is no exception with four G1 races to be decided.

Importantly for the thousands of racegoers that become spring carnival experts, TAB outlets in Victoria have opened in time for those wanting a flutter.

The highlight of Saturday is the G1 Victoria Derby, carrying $2 million in prizemoney for the staying three-year-olds.

There is the back-up G1 race for sprinting three-year-old’s, the $1.5 million Coolmore Stud Stakes, which goes a long way to securing a young horse its future at stud.

Then there are two 1600m G1 races, the Cantala Stakes for open-aged horses and the TAB Empire Rose Stakes for fillies and mares.

For good measure Melbourne Cup hopes trying for a late bid into the Cup get their chance at winning a ballot exemption in the Hotham Stakes.

Don’t forget, if you are out and about during the day and unable to watch the action on a big screen, all races can be seen over the four days of the Flemington carnival by watching Sky 1 via the TAB App.

In Sydney the $7.5m Golden Eagle will be run over 1500m at Rosehill while the $1m Yes Yes Yes Stakes (1300m) has a number of contestants from the TAB Everest set to meet again. In Adelaide there is the Listed John Letts Cup, previously known as the Tokyo City Cup, to be run at Morphettville.

Catch all four days of the Melbourne Cup Carnival live from Flemington on Sky 1 on the TAB App.

Smorgasbord of racing action at Flemington

The Victoria Derby is a time honoured race dating back to 1855 and pre-dates the Melbourne Cup. This year’s Derby may be lacking a ‘big name’ horse but it still promises to be an exciting contest as the three-year-old's step up to 2500m for the first time.

Last week’s winner at The Valley, CHERRY TORTONI, has been heavily supported firming from $6 to $4.20 and is now challenging YOUNG WERTHER, a drifter from $3 to $4, for favouritism. That pair won’t have the race to themselves though, with ALBARADO shortening from $8 to $7 as has HIT THE SHOT. The result will come down to which three-year-old gets the best run and handles the 2500m journey. 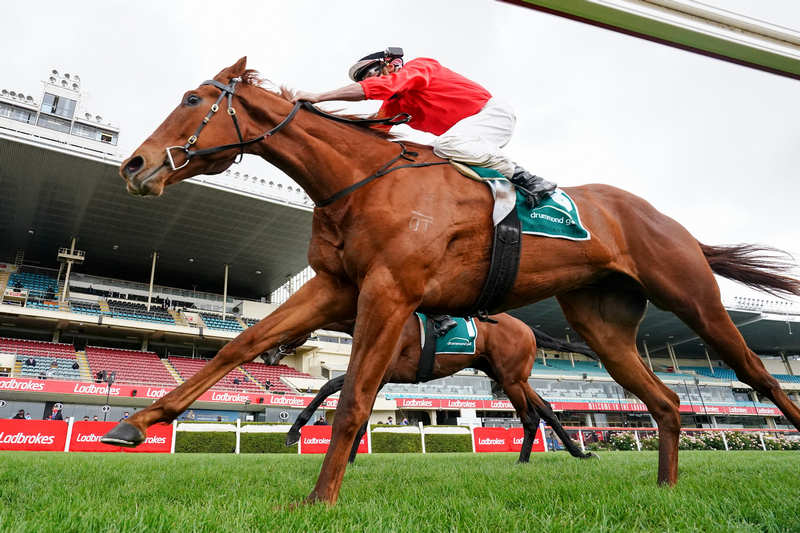 Since the Coolmore Stud Stakes became a G1 race and transferred from its date in September to Derby day in 2006 only four fillies have been successful, the latest Sunlight in 2018. That however has not stopped heavy support for the Chris Waller-trained SEPTEMBER RUN that has firmed from $5.50 to $4.20. Waller has an excellent record in the race, winning it three times with ZOUSTAR, BRAZEN BEAU and JAPONISME. September Run has been backed to the exclusion of almost every other runner with the exception of another filly, SWATS THAT, firming from $10 to $8.50.

There has not been a lot of early action in the Cantala Stakes with both YULONG PRINCE and WILD PLANET supported from $16 to $12 while the favourite MR QUICKIE remains solid at $5. In the other G1 feature, the TAB Empire Rose Stakes, there has been a nibble for the favourite ODEUM, $3.80 to $3.70, and also PRETTY BRAZEN, $15 into $14.

Two Lindsay Park-trained three-year-old’s have been heavily supported early in the day. AYSAR ($2.80 to $2.15) in the Carbine Club Stakes with PERSONAL shortening from $4.80 into $3.20 in the Wakeful Stakes. The two horses line up in the first two races on Saturday’s program.
Wet track could give Godolphin a Golden glow

THE prospects of a wet track at Rosehill has seen Australian Oaks winner COLETTE backed from $14 to $7 in the Golden Eagle. The Godolphin-owned galloper ploughed through the heavy conditions to win the Adrian Knox Stakes and then the Oaks during the autumn with her trainer James Cummings resisting the temptation of preparing her for the Caulfield Cup. Her form has been encouraging this campaign and a wet track plays into her hands.

Victorian visitor SIERRA SUE was dominant winning last time at Flemington and has also been supported from $14 to $9.50. Her co-trainer Trent Busuttin does not see a wet track being a hindrance.

There has not been a lot of early action in the Yes Yes Yes Stakes although WILD PLANET has been supported, trimming from $26 to $12 despite also being an acceptor in the G1 Cantala Stakes at Flemington.

MURRAY Bridge trainer Michael Hickmott has an enviable strike-rate in Adelaide and will saddle two runners in the John Letts Cup.

With apprentice Jessica Eaton aboard, AQUEDUCT is the $2.60 favourite, but stablemate DANON ROMAN, with Todd Pannell in the irons has shortened from $7 to $5. There has also been support for REGALO DI GAETANO firming from $10 to $8.

Check out all the LIVE action across the weekend on Sky Racing and the Sky Racing Active app.