The Banker searches for the sprinters

Is there ever such a thing as too much racing?

It would appear to be the case, especially at the higher level, with small fields for two stakes races at Caulfield while the fields for three ‘black type’ races in Sydney are not overly large. And over in Adelaide, the revamped Listed Durbridge Stakes at Morphettville, shifted from a spring date to the summer, has only attracted seven runners.

In Melbourne, by the time Saturday’s program is complete, there will have been six city meetings in the space of 11 days. While that may be good for the punter, small fields for major races are becoming the norm.

There are just six horses lining up in the Group 3 Chairman’s Stakes for two-year-old's, which coupled with a very short-priced favoured will deter punters, while the Group 3 Manfred Stakes, for three-year-old's, has also attracted six runners.

There are no excuses for the small numbers lining up in the Manfred, but the Chairman’s comes hot on the heels of two Blue Diamond Previews, both run over the same distance at Caulfield on Tuesday.

The Blue Diamond Previews and the Chairman’s are considered main lead ups to the Melbourne’s premier two-year-old race, the Blue Diamond Stakes at Caulfield on February 20.

There was 21 two-year-old's line up on Tuesday and add a further six on Saturday, there does not look a strong juvenile representation going forward.
Let us hope the two Blue Diamond Preludes (1100m) on Saturday week attract bigger fields which in turn will lead to a capacity field for the main attraction on February 20.

At least up in Sydney, with the Golden Slipper seven weeks away, the pair of two-year-old races has nine runners in the Widden Stakes for fillies and 11 in the Canonbury Stakes for the ‘boys’.

But the day’s feature, the Group 3 Expressway Stakes, has suffered the same fate as sprint races in Melbourne with only eight runners following the scratching of Southern Lad.

For a nation noted for producing quality sprinters – where are they all at present?

Money says Tagaloa is over the line at Caulfield

Money talks, and if the early betting is correct then TAGALOA is over the line in the Group 3 Manfred Stakes. The Trent Busuttin and Natalie Young-trained galloper has been crunched since markets opened on the race for three-year-old's, firming from $5.50 into $3.60 and he is now challenging for favouritism. The big question remaining is will, and can, the support continue. If Tagaloa recaptures his form of 12 months ago that saw him win the Blue Diamond, then he will be mighty hard to shake on Saturday.

He may not be the most reliable galloper around, but there are punters out there that think YULONG CAPTAIN has found the right race to be winning again in town. Yulong Captain has firmed from $6 into $4.20 and now shares favouritism with Long Arm. There were positive signs in Yulong Captain’s last run when he ran on from near the tail of the field to finish third. The rise in distance shapes as being ideal also. 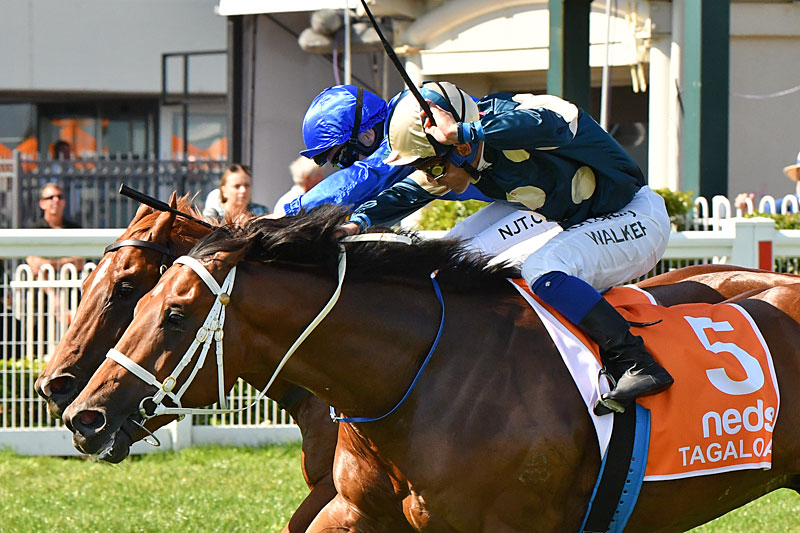 There seems to be strong mail, if the early betting can be believed, about two of Chris Waller’s debutants in the Canonbury Stakes. First the money came for HOME AFFAIRS who was $6 into $3.40 then the support came for GIANNIS who has been $15 into $6. They have both been good goes but there will be some disappointed punters it one gets the money and the other misses out. The wise way to go might be to have a “little something” on each of them.

Another Chris Waller-trained galloper has more than halved his initial quote. OSCAR ZULU has firmed from $11 into $5.50 to win the Rosehill Bowling Club Handicap. After a first-up win at Rosehill, Oscar Zulu headed to Brisbane to run a good third in stakes company at Eagle Farm on January 2. The Waller team looks to have found a nice race for him on Saturday and he should be tough to stop.

Phillip Stokes in for good day at Morphettville

If the money is anything to guide you, then Phillip Stokes is heading for a good day at Morphettville. This is the first meeting back at Adelaide’s major track for the year and Stokes has a strong team engaged. MRS MOURINHO can get the day rolling in the opener and has been $5.50 into $3.80. In the second race, VIRTUE has been $5 into $3. Later in the day, in race seven, TAKEN OFF ($4 into $3.20) and HEYINGTON STATION ($6 into $4.80) both line up for Stokes. As with the Waller pair in Sydney, it may pay to have a “little something” on the two of them.

Where there is smoke, there is usually fire, so it would pay a great deal of attention to CRIMINAL DEFENCE who has been $13 into $4.80. Criminal Defence won his maiden at this course three starts back and has performed solidly in two runs since at the Gold Coast and Doomben. Back to the roomier Sunshine Coast circuit, Criminal Defence can be followed, especially after the good early support.