All champions rise to the occasion and racecaller Matt Hill was at his supreme best in the two Group 1 features on Saturday.

The Newmarket Handicap was a messy race. The field split into two divisions, but when the field joined the course proper those on the inside start to gravitate towards the outside. And what that did was mix the field.

Watching on TV you didn’t know where to look, so spare a thought for Hill who not only had to paint a picture for those listening, but also be accurate for those glued to their sets, whether it was the big screen at home, pub or club or on the handheld device.

Accurate he was, and he then got better later in the day when calling Homesman the victor in the Australian Cup. It was a brave call as the heads between Homesman and Best Of Days were bobbing.

Just like he did when Vow And Declare “won for Australia” in the Melbourne Cup, Hill called Homesman home for “the Music Man”, Michael Gudunski, a part-owner of the gelding who died during the week, in the Australian Cup.

Already good, Hill’s calling is getting better with each passing year and wisely Racing Victoria and racing.com are not overtaxing his calling duties which keeps him sharp for the big days.

The All-Star Mile is next up for Hill and let us hope it will be another exciting finish that will bring out another classic call. 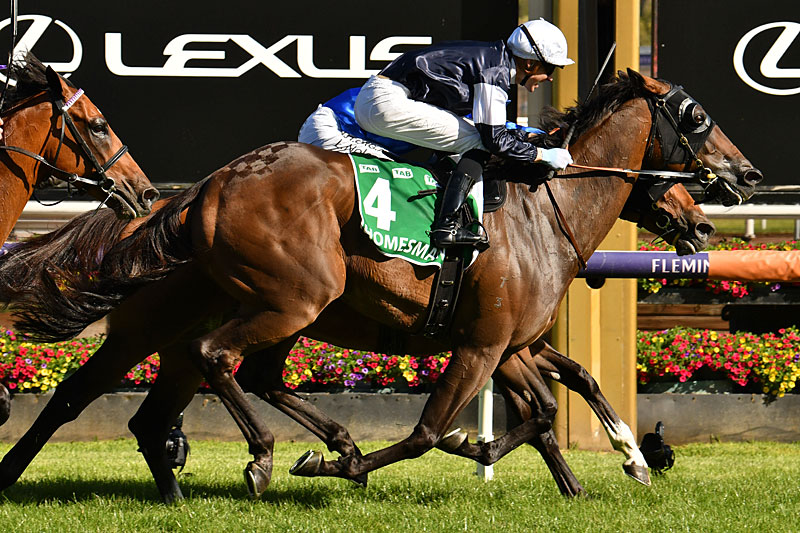 Having her first look down the Flemington straight was a big surprise for LA ROCQUE who rose to the occasion and got punters off to a good start. The John McArdle-trained filly was all over the place up the straight, but Jamie Mott was able to extract the best from her. It is not easy for any horse having their first run down the straight, especially a two-year-old, and La Rocque did it tough tracking away from the fence. McArdle has a good team of two-year-olds and can look for to a successful three-year-old season with La Rocque and stablemate Tycoon Humma.

Pretty hard not to be impressed by LIGHTSABER. It was the third straight win for the Peter Moody-trained two-year-old who teamed with Luke Nolen with an impressive win in the Sires’ Produce. Taking luck out of the equation, Nolen used an inside barrier to full advantage taking Lightsaber to the lead. The opposition had their chance to run the pair down, to no avail. Lightsaber is just as effective when ridden behind the speed. He looks set for a bright career.

It would seem ANNAVISTO is her own worst enemy. On Saturday she was slow into stride and then would not settle for Damien Oliver when position behind other runners. When clear early in the straight she wanted to lay-in a shade and then had to slightly alter course when the winner Cumberbatch pushed out into clear room. If Annavisto can correct her barrier antics and stop throwing her head around when restrained, there will be a good win for the Mick Price and Michael Kent Jr stable.

Once again BROOKLYN HUSTLE had had no luck in a feature race. She went to the line under a stranglehold by rider Damien Thornton in the Newmarket Handicap when unable to get a clear crack at them over the final 200 metres. Thorton had done what looked the right thing, edging wide from the start from his middle draw, but everywhere he went he just could not find clear air. That was Brooklyn Hustle’s sixth start in a Group 1 race, without a placing, but she is by far a much better mare than that.

It was a different OXLEY ROAD that fronted up on Saturday as a $2.70 favourite after wins at his first two starts. On Saturday Luke Nolen held Oxley Road together in the first half of the race to gain some cover, but it was noticeable at the 300-metre mark that he was in trouble. The sprint was missing and he struggled to the line. A break now might be on the cards, or Oxley Road might just be a better galloper if allowed to roll in front. Let us see what appears next time he is produced.

To put it simply, LUNAKORN was disappointing. Jamie Kah reported to stewards she could off no explanation for the run while Sam Freedman told racing.com he could not find an excuse. He said they will take her home and go over her with a fine toothcomb which will hopefully come up with an answer. But on that effort on Saturday, it would be pretty hard to back her in anything coming up.

The All-Star Mile is the feature at The Valley on Saturday. On the program also is the Group 2 Alister Clark Stakes (2040m) which could decide whether a number of likely entries then head to Sydney to continue autumn campaigns. Two Listed races, the St Albans Stakes and the Abell Stakes will also be run.

In Sydney the two-year-olds get their final chance to showcase their wares for the following week’s Golden Slipper in the Magic Night Stakes, for fillies, and the Pago Pago Stakes for the boys. The day’s feature is the Group 1 Coolmore Classic, for fillies and mares, always a keenly contest affair. In Queensland, the main meeting is down on the Gold Coast while over in Adelaide the inner track at Morphettville again hosts the Saturday fixture.