Caulfield in a moment, but first to Randwick and you would go a long way to see a better contest than the Queen Elizabeth Stakes on Saturday.

Flashbacks of the 1992 Cox Plate came flooding back when Super Impose was successful and a blanket could be thrown over the first five across the line. The Queen Elizabeth may not have had the Cox Plate drama of that year, it included a fall at the 600m mark and then the crowding in the straight, resulting in a protest, but it was still a terrific contest.

English raider Addeybb (IRE) confirmed his status as one of the world’s best gallopers with his victory, but runner-up Verry Elleegant (NZ) certainly lost no admirers. In all, a little over two-and-a-half lengths separated the seven runners across the line and at various stages in the straight any one of those combatants looked a winning chance.

All accolades however should go to Tom Marquand who summed the race up early after being a little slow to break. Caught a little wide early, he went forward while James McDonald on Verry Elleegant went back, a move she resented as she over-raced. It proved decisive and while Verry Elleegant looked to cruise up, Addeybb was in for the fight and the further the race went, the greater the margin became.

He is a special horse and one that has added something to the Sydney Autumn Carnival.

And what a brave effort from Dalasan. He seems to have been around forever, but is still only a four-year-old, and did all the donkey work in front in Saturday’s 2000m contest. He was entitled to be run over by the majority of the pack, but held strong in straight finishing less than three-quarters-of-a-length off in third place, showing that he is deserving of a Group 1 victory.

What a training effort by Nick Ryan to get DICE ROLL to win first-up after being a few months shy of two years away from the race track.

Having raced in France, Dice Roll went to Hong Kong where in 11 starts the best finish Dice Roll had was a fourth-place and came to Australia having finished last in his previous four starts. For Ryan to revitalise Dice Roll into being a winning racehorse again was a great training effort, but then the horse had to produce it on race day. That he did and there are more wins in store.

FINANCE TYCOON was simply devastating in The Showdown and he had the right form credentials leading into the race. Finance Tycoon had run fourth in the Blue Diamond behind Artorius, Ingratiating and Anamoe but missed the Golden Slipper due a slight set-back. That set-back worked in the favour of Finance Tycoon who was fit and ready for his assault on Saturday. He stalked the leader and when Luke Nolen asked for the effort, he sprinted quickly and opened up a winning margin that was four-and-a-half lengths on the line. The victory underlined his toughness and Lindsay Park can look forward to a good three-year-old season with Finance Tycoon. 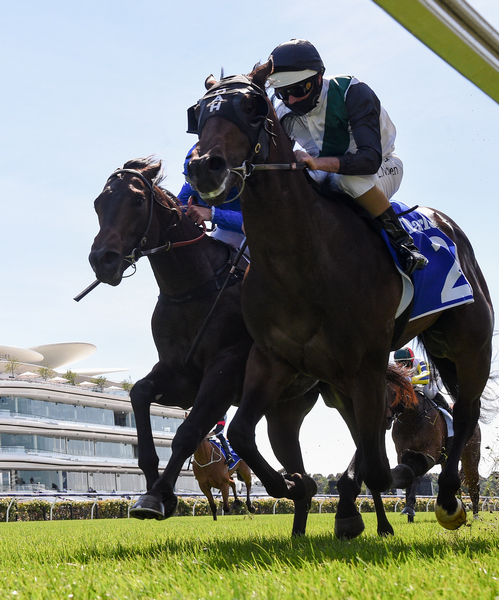 Finance Tycoon takes the money in The Showdown, picture Quentinjlang.com

STARRY LEGEND is his own worst enemy. When he learns to settle, he will be an outstanding horse. In both his wins prior to The Showdown, he led and kept running over 1000m. But the 1200m journey on Saturday was a different proposition and he could not reserve any energy for the final stages of Saturday’s race. John Sadler will work on that and hopefully with maturity Starry Legend will extend out to 1200m and prove himself a very good galloper.

LYRE showed she was on track for the Robert Sangster with her second placing in the Bel Esprit Stakes. Lyre was in a midfield position in the run and was a little tight for room in the straight, before bursting through late. Although she has not won in over two years, Saturday’s performance shows she still has got that zest for racing and will appreciate the rise to 1200m of the Robert Sangster.

BELLA NIPOTINA was a little plain in the VOBIS Gold Dash. She raced in a forward position for Willie Pike and looked to be travelling well, but in the straight was unable to quicken like she can. She held on OK, but without the fight she showed in Sydney at her previous outing. Maybe she has met her mark this campaign, and her next run will be telling.

ANCESTRY needs everything to go his way which it did not in the Bel Esprit Stakes. Admittedly he was burdened with 60kg on Saturday, but he did not get into the race. He usually leads, but Sisstar outsped him and as was the case in his previous outing at Mornington there was nothing left in the tank at the finish. A freshen up is probably called for now.

A ho-hum meeting at Caulfield on Saturday highlighted by the Listed Anniversary Vase while on Sunday there is the Anzac Day meeting at Flemington with the running of the VRC St Leger, for three-year-olds, a race that pre-dates the Melbourne Cup.

The Sydney Autumn Carnival winds up on Saturday with the running of the All-Aged Stakes and Champagne Stakes, with a good support program.

Three Listed races, the Tails Stakes, the Princess Stakes and the Mick Dittman Plate highlight the Doomben program in Brisbane while in Adelaide the carnival there continues with the South Australian Derby led-up, the Chairman’s Stakes, taking centre stage.