There was an air of excitement driving to Caulfield on Saturday for the first big meeting held in Melbourne in front of a crowd that almost resembled the same numbers at the track as 12 months previously.

Caulfield could host up to 9000 patrons on Saturday and the course was set up to maximise that number with dining upstairs overlooking the track, the members lawn area fully loaded and the public lawn area also full of spectators.

It added to the atmosphere of a day’s card full of stakes races, highlighted by three Group 1’s, the Blue Diamond Stakes, the Futurity Stakes and the Oakleigh Plate, and those races did not disappoint.

What a performance was turned in by Artorius to win the Blue Diamond, then there was the dead-heat of Celebrity Queen and Portland Sky in the Oakleigh Plate which is what handicap racing is all about.

The weight-for-age Futurity Stakes resulted in two of Australasia’s best mares – Probabeel and Arcadia Queen – beating home the boys and setting up a mouth-watering rematch at The Valley in three weeks' time for the All-Star Mile. It promises to be an exciting contest with $5 million up for grabs.

As good as autumn racing may be, spring is where it is best, as Blue Diamond Stakes Day does not quite live up to either Caulfield Guineas Day or Victoria Derby Day. But no complaints as it was a fine day of racing and bring on Flemington next week for what promises to be an exciting edition of the Australian Guineas.

There looks to be something special about OXLEY ROAD who made the jump from winning a maiden on a heavy track at his debut at Flemington last month straight into Group 3 company to claim the Zeditave Stakes. The Peter Moody-trained three-year-old, a brother to Group 1 winner Exceedance, is doing it all on raw ability at this stage and could start in Group 1 company as early as next month in the William Reid Stakes at The Valley. Moody says Oxley Road has a brilliant turn of foot when taking a sit, something we are yet to see in his two starts after leading throughout.

Anthony Freedman and his son Sam know how to produce a Blue Diamond Stakes winner, claiming their second success in three years when ARTORIUS won on Saturday. It was a brilliant training effort as Artorius did not come through the traditional Blue Diamond lead up path. He won at Sandown over 1300m on January 23rd and the team went about freshening him up for the 1200m contest. For a young horse looking for 1400m and beyond, that strength played out late in the race as he overpowered his rivals in the closing stages. It will be interesting to see how he performs in Sydney during the carnival with the rise in distance for the Sires’ Produce Stakes and Champagne Stakes his likely targets. 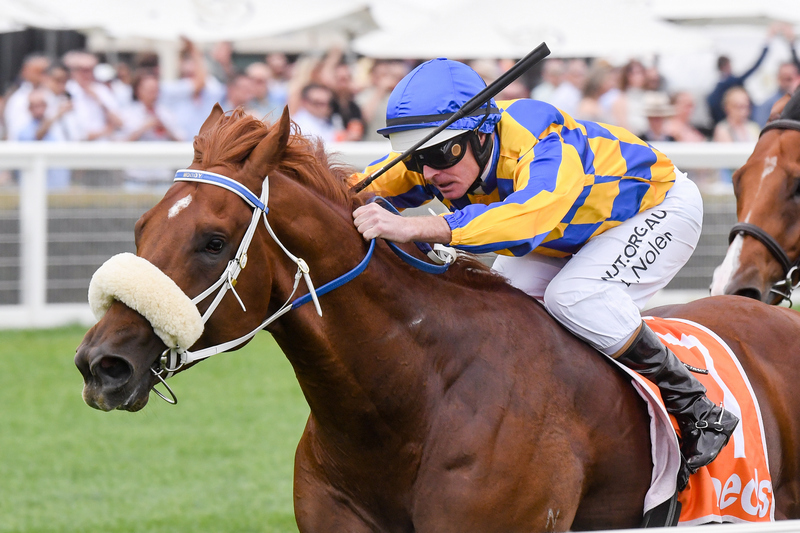 Just forget IMPECUNIOUS went around in the Angus Armanasco. She was buried away on the fence in the early stages of the race and then got shuffled back to near last approaching the turn. Jockey Glen Boss then had all sorts of trouble finding clear room, zigging when he should have zagged, being unable to take advantage of narrow openings, but when a gap finally did arrive, it was too late. The filly was game in finishing fourth, beaten a half-length, but to make matters worse she was galloped on during the race.

I wouldn’t be dropping off YOUNG WERTHER. He was having just his fifth race start on Saturday in the Autumn Classic and is still learning what racing is all about. He settled well back and you knew you were in trouble 600m from home when the sprint came on and the gelding was left flat-footed. Knowing the whip rules, jockey Damien Oliver was unable to ‘get stuck into him’ at that vital stage and risk a suspension, before he made some good late ground to finish fifth behind Parure and Butter Chicken. Young Werther is an out-and-out stayer and needs a lot more ground than the 1800m he faced on Saturday.

Not too sure what to make of SOVERIEGN AWARD. She looked a very promising mare in the spring, registering three wins on the trot, including two at Group 3 level. In her two runs this campaign she has failed to recapture that form, although admittedly first-up she did run in the C F Orr Stakes. However, on Saturday she led, but was easily run over in the straight. She is her own worst enemy, over-racing in front, so until she can overcome that problem, wins at a higher level than Group 3 level may be difficult to attain.

Could the 1200m have found out ENTHAAR or did the hiccup of having to undergo two veterinary inspections to be cleared to start in the Blue Diamond Stakes play a role. These are questions that will need to be answered before the filly heads to Sydney to continue her campaign. Punters still had confidence in the filly as she was sent out the short-priced favourite but after tracking a wide course in the run to the turn, Enthaar was beaten soon after straightening. Maybe at this stage of her career she is a short-course specialist, so let’s see what happens in the coming weeks.

As mentioned earlier, looking forward to the Australian Guineas at Flemington on Saturday, but there is a good support program as well. The Blamey Stakes offers the victor a ‘win and you’re in’ chance into The All-Star Mile, while there are another five stakes' races set to be run.

The Sydney Autumn Carnival takes another step at Randwick on Saturday with two Group 1 races – the Chipping Norton Stakes and Surround Stakes – to be run along with another four stakes’ races. The Sunshine Coast will host the Tattersall’s Member’s Cup while in South Australia, racing this weekend will be staged at Murray Bridge.