Last year's Sydney Cup runner-up, Vengeur Masque (IRE), will not attempt to go one better in next month's race with connections retiring the Irish-bred son of Monsun.

Vengeur Masque was beaten a long neck by Shraaoh in the 2019 Sydney Cup, the closest he has come to scoring at Group 1 level.

The gelding missed last year's Spring Carnival due to a hock injury sustained in the paddock just before he was due to return to work. He raced three times this year but has struggled on each occasion, finishing last behind stablemate Aktau in last Saturday's $350,000 Listed Mornington Cup (2400m).

"It's a sad day for us as he's a stable favourite but after his run in the Mornington Cup last Saturday we decided it was time for him to finish," said trainer Michael Moroney.

"He ran in an English classic, the St Leger, then came to us and won a Geelong Cup and a Queen Elizabeth Stakes.

"He ran in a Melbourne Cup and a Caulfield Cup and just missed when a close second in a Sydney Cup so he doesn't owe anybody anything." 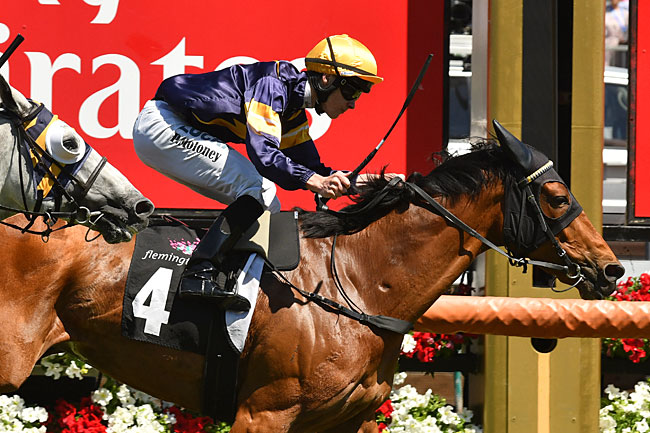 Vengeur Masque was acquired from fellow Melbourne Cup-winning trainer Mikel Delzangles from France and won three of 30 starts for Moroney across Australia and New Zealand, accumulating $1.3 million in prizemoney.

His three Australian victories all came at Stakes level, but he'll be remembered for a series of near misses during his career.

With only 24 horses gaining entry into Australia's famous race each year, Vengeur Masque was 25th in the elimination order for the 2016 and 2017 Melbourne Cups.

In winning the 2017 Geelong Cup, Vengeur Masque became one of three Geelong Cup winners in the past 10 years to miss out on a start in the Melbourne Cup a fortnight later.

He was then runner-up to Cismontane, beaten a head, in the Lexus Stakes when trying to gain ballot-free exemption into the 2017 Melbourne Cup, but gained some compensation by winning the G3 Queen Elizabeth Stakes (2600m) a week later.

When he finally qualified for his first Melbourne Cup in 2018, Vengeur Masque struck an unfavourable rain-affected Soft 6 surface - the first time the Cup had not been held on a Good track since 2010.

He also almost led throughout in the 2017 Mornington Cup only to be overrun in the final stride by Godolphin's Tally, to just miss out on ballot exemption for the Caulfield Cup later that year.

"He was thoroughly game and genuine - the one thing he didn't like was rain-affected ground and when we sent him across for the (2019) Auckland Cup it started pouring down on the morning of the race and the track ended up as heavy, even so he still tried his heart out and finished fifth, that's the sort of horse he was," Moroney said.