Sure Will Do some damage after second win

Exciting four-year-old Sure Will Do franked the brilliant form shown at his impressive debut win with another facile win second-up on Saturday at Kranji.

While the first rout came in the softer company of an Open Maiden race over 1200m on turf, there was even greater merit in the $75,000 Novice race – named as Cooptado 2015 Stakes - over the same course and distance on Saturday, up against much tougher opponents such as Day Approach, Boomba, Brutus and Maceo, to name a few.

More so when the son of Per Incanto could not lead at his own leisure as at his maiden win. As expected, he jumped smartly from his barrier one to show the way, but second favourite Day Approach (Vlad Duric) came serving it up to him from the 600m while Boomba (Ruan Maia) was poised to pounce right behind the duelling duo. 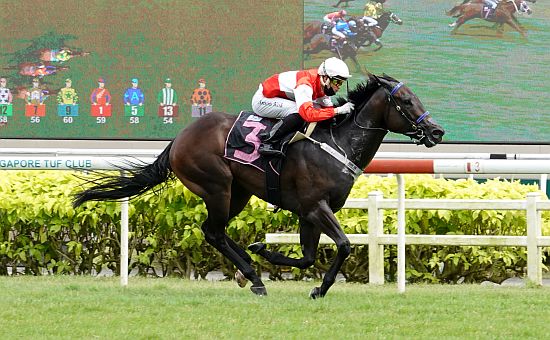 Sure Will Do (Simon Kok Wei Hoong) makes all in Race 5, picture Singapore Turf Club

The question whether he had the ability to absorb such high pressure at only his second start was answered in no uncertain terms.

Day Approach had barely drawn on level terms that Sure Will Do, as if spurred on by this daring challenger, suddenly put on the big bounds.

In the blink of an eye, the Chens’ new pride and joy was off and gone in their eye-catching red silks, with Simon Kok Wei Hoong (was aboard at first win as well) just cuddling him to the line once the margin had become unassailable.

Sure Will Do strolled in by just under three lengths from Day Approach, himself a dominant winner at his last start, with Boomba third another head away.

Backed down to $13 favouritism, Sure Will Do clocked 1min 9.92secs for the 1200m on the Short Course. With the much more substantial prizemoney on offer compared to his maiden win ($20,000), his stakes earnings have now swollen five-fold to around $50,000 for the Elaine Chen Stable.

“He’s won for very good owners, very good people who’ve had a few handy horses with me. People like them want to be looked after, good prizemoney will get people to buy quality horses.

“They told me to look at four horses at the New Zealand sale, and this one was the best of them. Paul Hickman used to have a good horse (Kallisan) by the same dam (Eloa), and the Chens will have NZ$210,000 (price tag) worth of fun with this one.

“I didn’t know what to expect second-up, he led again but was a little shuffled up and taken on, but he was pretty impressive when he kicked away.

“I’ll have a look around what’s next for him, I’ll just take him through his grades for now, but this horse could be right, he could be the next good one for me.”