Cheongdam Dokki rolled back the years, crushed all-comers and silenced the sceptics by completing a sensational hat-trick in the Herald Business Cup at Seoul Racecourse on Sunday.

The six-year-old’s most recent win prior to Sunday was the exact same race, run in April last year with the race being re-scheduled this term after the Covid-19 forced suspension of racing.

Cheongdam Dokki was transferred back to Park Jong-kon after his most recent run in December last year. Trainer Park was Cheongdam Dokki’s original handler, preparing the chestnut for his first nineteen career starts, yielding thirteen wins.

Park Tae-jong was aboard the six-year-old Sunday, when the flashy type brought up his third win in the listed feature.Cheongdam Dokki was asked to work forward early by jockey Park, eventually taking up the role of pacemaker.

The To Honor And Serve gelding maintained the lead in the back straight, travelling strongly before being asked to improve at the top of the Seoul home straight.

Heuk Jeonsa, World Today and Great King all sat on speed in the race whilst Tiz Plan’s rider Johan Victoire improved his position in the middle stages of the 2000m feature.

As the field balanced up for the run home the only danger to Cheongdam Dokki was Tiz Plan but Victoire and his mount were unable to bridge the gap, with Cheongdam Dokki winning by four lengths.

Triple Nine and World Today appear to be the disappointments to come out of the race, both finishing well beaten.

The ever reliable Shamrocker, partnered by Alan Munro, came home 3rd in the race for the third time in three years with Bart Rice’s Rock Hard Seven coming home in 4th under Francois Herholdt.

The next staying feature to take place will be the YTN Cup in July where last year’s Korea Cup winner Moonhak Chief is nominated to make a return.

Korea Cup and Grand Prix Stakes winner Moonhak Chief, nemesis of Cheongdam Dokki last year, is back in work having recovered from a fetlock injury that ruled him out of Sunday’s feature. 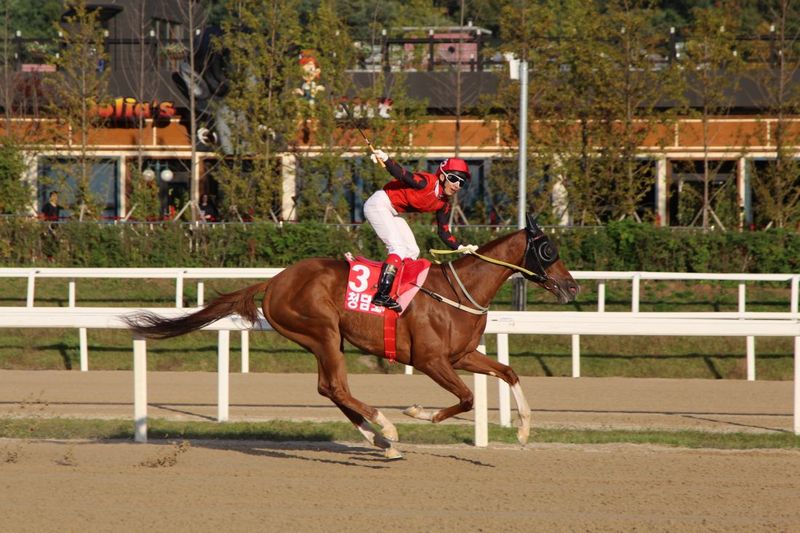 - Potentially on his way to the YTN Cup is Buhwarui Banseok. Bart Rice’s seven-year-old warhorse scored a superb all the way win over 2000M in Busan’s feature Class 1 handicap on February. Despite giving significant weight to most of his rivals, Buhwarui Banseok dominated throughout, shrugging off lighter weighted pretenders with ease to win by a remarkable five-lengths under jockey Seo Seung-un.

- Buhwarui Banseok’s victory meant that all three foreign trainers were on the board at Busan on Friday, with Peter Wolsley and Thomas Gillespie both training two winners apiece.

- The 2019 Korean Oaks winner Deep Mind has had an interrupted career since winning the fillies’ Classic. She offered little in two starts earlier this year but put that all behind her when romping away with Busan’s Sunday class 2 feature over 1800M.

- On Saturday at Seoul the star of the show was Morfhis, who like Buhwarui Banseok at Busan a day earlier, defied a high impost to see off an excellent class 1 field. Johan Victoire brought the five-year-old Stephen Got Even gelding through just in time to roll Gangtoma on the line in the seven-furlong Class 1 feature with Lil’ Patron and Spring Back a further two-lengths in arrears. Morfhis moves on to 7 wins from 22 starts, however, four of those successes have come at Class 1.

- Also, on Saturday, Ji Yong-cheol reached a career milestone when he became the fourth trainer in local racing history to saddle 900 winners. The landmark win came when three-year-old filly Milky Sherry took out the 1700M race 13. Only Kim Young-kwan and Park Dae-heung, along with the now retired Shin Woo-chul, have trained more winners in Korea.

- In breeding news, the Korean Mainland Breeders’ Association will hold its second Two-Year-Old sale of 2020 at the KRA Jangsu Stud Farm this coming Tuesday (June 23rd). A total of 72 lots are being offered with juveniles by Hansen and Take Charge Indy among those likely to be in demand. The  the sale will be streamed live on the KRBC YouTube channel from 10am (KST).

The catalogue can be found online athttp://studbook.kra.co.kr/neweng/html/eng_auction_list.jsp