After the Osaka Hai, he marked four third-place finishes—the Yasuda Kinen (1,600m) and the Japan Cup last year, along with the Dubai Sheema Classic (2,410m) and the Takarazuka Kinen (2,200m) earlier this season. The five-year-old bounced back remarkably today from his recent Tenno Sho (Autumn) (G1, 2,000m) start in which he was seventh.

For trainer Yasushi Shono, this is his second JRA-Grade 1 title following the Osaka Hai victory with Suave Richard and jockey Oisin Murphy, who is riding under a short-term license, has now landed his first G1 and second graded victory following the G3 Negishi Stakes he claimed in January this year. 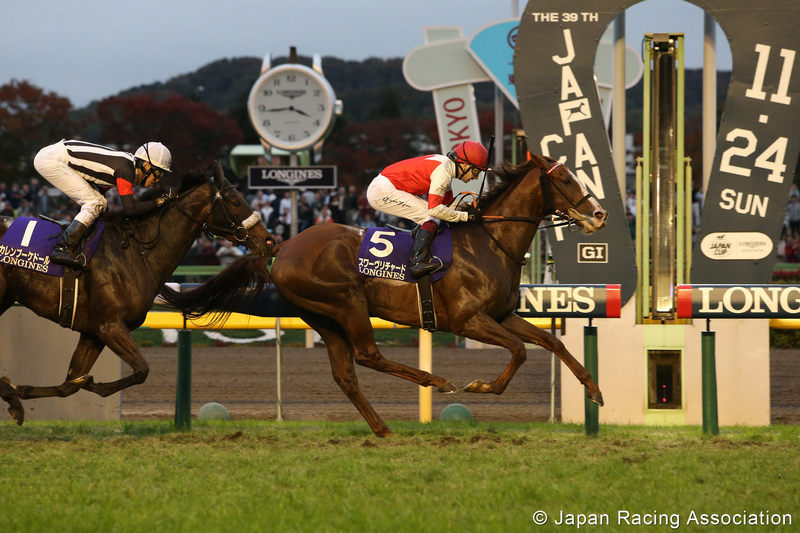 The 15-horse field broke in front of the stands on the soggy track with Daiwa Cagney, Danburite and Win Tenderness disputing for the lead. Apart from four horses trailing far behind, the leading group was tightly bunched up cruising down the backstretch with Suave Richard relaxed in seventh to eighth, four to five lengths from the pace on the rails.

As the field fanned out at the top of the stretch, Suave Richard kicked into gear surging through an opening near the rails, inherited the lead from the tiring frontrunner before the furlong marker and dueled briefly with the strong challenge of Curren Bouquetd’or. However, the chestnut easily pulled away, showing a stronger drive to the wire to notch a 3/4-length win.

Breaking from the inner-most stall, fifth favourite Curren Bouquetd’or saved ground in third to fourth, entered the straight in second and fought the eventual winner at the furlong marker but failed to further threaten while putting in a good runner-up effort.

Sent off second favourite, 2018 Tokyo Yushun (Japanese Derby) victor Wagnerian travelled in sixth behind Curren Bouquetd’or along the backstretch, dropped back to eighth when the others started making their bids rounding the last turn, but finding a clear path in the middle of the straight, unleashed a furious charge, tagging the pace-setter 100 meters out for a 2-1/4 length third.

Race favourite and 2017 Japan Cup runner-up Rey de Oro, saved ground in eighth or ninth behind the eventual winner and ran willingly but was through by the furlong pole, fading to 11th—his first double-digit finish.

“I am happy and relieved that he claimed his second G1 title at last, his first since the Osaka Hai. We raced him in the same racing schedule as last year, coming off the Tenno Sho (Autumn), and since this was the autumn of his five-year-old season and he is more matured, we had high expectations as his form became better with every race," said Shono.

"In last year’s race, the going was firm and there was the record-breaking Almond Eye. Even though it rained heavily and Suave Richard had never experienced this kind of turf condition before, the heavy going worked in our favour, letting him keep his own pace.

"I told the jockey that we wanted a good break and that the horse be relaxed not far from the pace and everything turned out perfectly. The horse was relaxed in the gate, broke well, and Oisin fought well to keep him in an ideal position. The horse responded beautifully after the last corner and Oisin bravely shot him through a tight space on the rails—I was just ecstatic after that.

"This is a huge triumph for us all because we have worked so hard for a year and a half since the Osaka Hai. I cannot say at this point what his plans are for the future, it will all depend on how he comes out of this race,” he said.

“I suppose it is a dream come true to have won this race. I was happy with Suave Richard in his gallops and he felt brilliant," said Murphy.

"The Japan Cup is one of the most famous races around the world and it is very hard to win so I wasn’t confident but very hopeful.

"Suave Richard has got a lot of quality, he’s a very good mover with a lot of pace, if you have seen his gallops he
does incredible times.

"The most important thing was for him to relax. The ground was hard work today and when the ground is slow, you cannot waste energy. (At the straight) I had the option of forcing Curren Bouquetd or going out, that would have taken a bit of energy but he’s a big enough horse to do that.

"But then I saw the inside open, it was easier to go the shortest way. I knew in the last 200 meters that Suave Richard would win.

"After a big race it is very hard to immediately understand how important it is, but sure the Japan Cup for me is one of the best races in the world and I won’t sleep for a week.

"It’s a big relief (to have won my first big title here in Japan) as I want to win group ones all over the world, and it is super.

"The quality in Japan is really high and the world stage will be hearing a lot more about Japanese horses. I would love to win many more G1’s in Japan but it is very hard to win," he said.