Determined to build on a positive return to race-riding, Zac Purton believes the pecking order for the HK$48 million Four-Year-Old Classic Series will become clearer during a defining finale to the meeting at Sha Tin on Sunday. 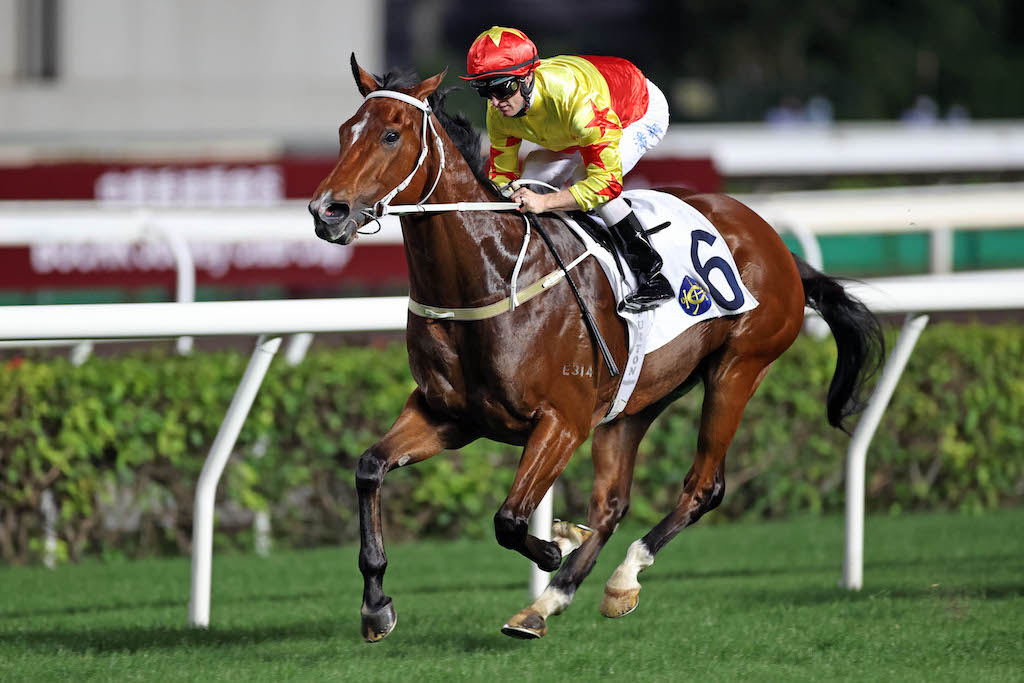 Purton teams up with California Spangle on Sunday, picture HKJC

“I expect he’ll fly the gate, control the race and get the job done. I feel like he’s going to keep going through the ratings and he’s an exciting horse,” Purton said. “He’s a horse I’ve got a lot of time for, I really like him.

“He’s got a great attitude, a lovely action and he’s a really nice horse. He’s the sleeper I think because although he’s only been over sprint distances so far, he’s given me the feel that he could definitely run longer and his pedigree suggests that might be the case as well. He could definitely step-up and do it.”

Relieved to have made a successful comeback from injury with victory in the last race at Happy Valley on Wednesday night (12 January), Purton will combine with David Hall’s Captain Win in the Class 3 Lai Kok Handicap (1600m). Rated 77, Captain Win will jump from barrier five.

“He’s run well at all his starts here in Hong Kong,” Purton said of the gelding, who raced in Australia as Captain Spud. “He was beaten [when fourth to Soulmate] by a slow tempo last time, he was back and he had to go wide and I thought the run was full of merit.

“I worked him earlier in the week and he feels really good, he feels like he’s taking the natural improvement and the necessary steps every time I get on him. He’s going the right way and I believe when he gets to the Four-Year-Old series, he should be a contender.

“I feel like he’s going to keep going through the ratings and he’s an exciting horse.”

“He’s been impressive. The handicapper gave him 11 points [58 to 69] for his last win, but I still believe that’s not enough to stop him for the time being,” Moreira said.

“He seems in good shape and I just hope that he’s able to go there and give his best. Stepping up in distance, the pace shouldn’t be as fast so — if John wants me to — we might be able to put him close.”

Completing a fascinating treble of races to complete Sunday’s fixture, David Hayes will send Lucky With You into the Class 3 Hoi Lai Handicap (1400m) under Karis Teetan, hopeful of a fourth win from the gelding.

“He’s in really good form and he’s thrilled me in training, so he’s heading in the right direction. There’s a little bit of a query at the 1400 [metres], but he gives me the impression he’ll run it right out,” Hayes said.

“I think he’s pretty smart. I think he’s a horse at the end of his career, I’d be disappointed if he’s not ticking past a 100-rating, so he’s got a bit of room to improve.

“I thought his last win was the best of all his wins because he really hit the line, which thrilled me because his first two wins, he was a bit empty getting to the post. But, up in class, he hit the line well.”

“Disappointing to see him in the race but he’s clearly a very good young horse, like mine. It will be very interesting,” Hayes said.

Injured in the same race fall as Purton on 12 December, Lyle Hewitson returns to race riding on Sunday with eight mounts.

“Without a shadow of doubt, I’m 100 percent in terms of well-being — flexible and supple — so, from the injury perspective, I couldn’t be better. Fitness-wise, there’s nothing like race fitness but coming into it, I feel like I’ve put in enough work,” the South African said. “I’ll progress more from being back at the races, so no excuses.”

A dual winner in England for William Knight when known as Aylesford, Lightning Bolt limbered up for his Hong Kong debut with an eye-catching second in a trial at Sha Tin behind Astrologer on 28 December.

“He seems to be a nice type of horse and he showed ability through the trials and I look forward to riding him. He’s very professional,” Badel said.