Top sprinter-miler Mr Malek stamped his class with an authoritative win in the $85,000 Class 2 race over 1400m at Kranji on Saturday.

A flashing third in a Kranji Stakes A race over 1200m at his first-up race from a four-month spell (during which time he changed hands from Lee Freedman to Steven Burridge), the Swiss Ace four-year-old did give the backers who took him at $10 a fright when he was caught pocketed on the rails at the 400m.

But jockey A’Isisuhairi Kasim smartly shouldered Passport To Rome (Mohd Zaki) out of the way, finding the space Mr Malek needed for his signature turn of foot to be ignited to its maximum power. 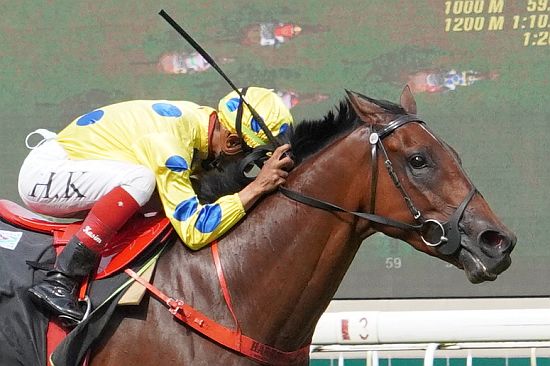 Once in the clear, Mr Malek pinned his ears back as he went about gobbling up the remaining 100m towards an easy 2 ½-length win that puts him in another parish. The one-out one-back run helped, but Passport To Rome was still a surprising runner-up, and ought to be commended for his fighting spirit among such a talent-packed field.

Nowyousee (Joseph See) also ran a bold race in third place. He handed up the lead to Muraahib (Danny Beasley) in the backstretch only to get his change back by drawing on level terms again at the 300m, but just looked a little tapped for toe as he could only manage third place another head away.

Mr Malek ran the 1400m on the Short Course in 1min 22.92secs and has now racked up a smart record of seven wins and four placings from 12 starts for prizemoney that has now exceeded the $385,000 mark for multiple Singapore champion owner Oscar Racing Stable, surprisingly an outfit Burridge had never worked with before.

“I’d like to thank the owner (Phua Chian Kin) for giving me the opportunity to train this horse. I’ve never trained for him before,” said the Australian handler who has been based at Kranji since 2005.

“Mr Malek has trained on since his first run for us. You’re always worried when a horse hasn’t run for four months and he then backs up after two weeks for his second-up run.

“But I was happy with the horse going into today’s race. I thought he needed a bit of luck at the weights (57kgs), but he got a nice posie in the race.

“The 1600m will be even better, and all going well, he should get the 1800m of the Derby. Things are going the right way for him.”

Burridge has pencilled in the last two Legs of the Singapore Four-Year-Old Challenge – not in contention this year with the annulment of the first Leg, the Group 3 Silver Bowl (1400m) – for Mr Malek, the Group 2 Stewards’ Cup (1600m) on July 3 and the Group 1 Singapore Derby (1800m) on July 25, two races that are still missing from his resume, a void he now stands a live chance of filling.

Though still a maiden in feature races, Mr Malek certainly lost no friends with a second and a third to Inferno in the Group 1 Lion City Cup (1200m) and Group 2 Singapore Three-Year-Old Classic (1400m) respectively last year – and from the way he thumped his rivals on Saturday, 2021 could well be his year.

After Seson scored a quickfire double for the Burridge-A’Isisuhairi combination (master and apprentice in a not-too-distant past), Burridge would doubtfully put the Dalghar three-year-old in the same league, but was still pleased with the purple patch of sorts he has struck.

A similar brace with Wealth Elite and Chalaza last Saturday coupled with the latest one has in one fell swoop doubled his 2021 tally to eight winners, seeing him leapfrog over four trainers to now sit in 12th spot on the Singapore trainers’ premiership.

“We’ve had no winners for a long time, so it’s nice to get another double today,” said Burridge.

“Seson was at his first Polytrack race, but he trialled good on the surface before. He overraced with the blinkers at his last few starts and I decided to take them off today.

“He’s no world beater, but he beat quite a fair field today.”

Having now won two of his dozen of starts and run second twice, Seson has had his prizemoney snowball to just a tick under the $50,000 mark for his owner Mr Ng Tet Kong.