The striking chestnut had optic implant surgery for a rare condition last month and while recovering well from the operation picked up a lung infection that is causing concern.

Trainer Jamie Richards said the multiple Group One winner was making steady progress and hopes the gelding will be out of the clinic by early next week.

"The plan is to spell him in NSW for probably three or four weeks to make sure everything is 100 percent and then get him back to New Zealand," Richards told RSN927.

"Then we will give him a break and get him ready for racing later in the summer and hopefully have him back to Sydney in the autumn."

Richards said they would get a better indication of Te Akau Shark's progress once the horse came off the medication for the lung complaint, adding it could affect other parts of the body.

"The implants have improved the cloudiness in his eye and they don't appear to be painful," Richards said.

Meanwhile, the Matamata trainer said the border closure between NSW and Victoria because of a spike in COVID-19 cases was concerning as he looked to descend on the Australian carnivals with a quality group of Kiwi raiders.

"The longer it goes on the more concerning it becomes," Richards said.

“Our plan was always to have those horses ready to trial at the back end of July or early August and then look to bring them over but we have to see how it all plays out in the next three weeks.

“I think we have got the right horses to come over and be competitive, but getting the staff and horses there is the concern and rather than be rushing into it in the first week of August, we might just take stock and give them a couple of trials here in New Zealand and possibly a race and maybe look at it a bit later in August.” 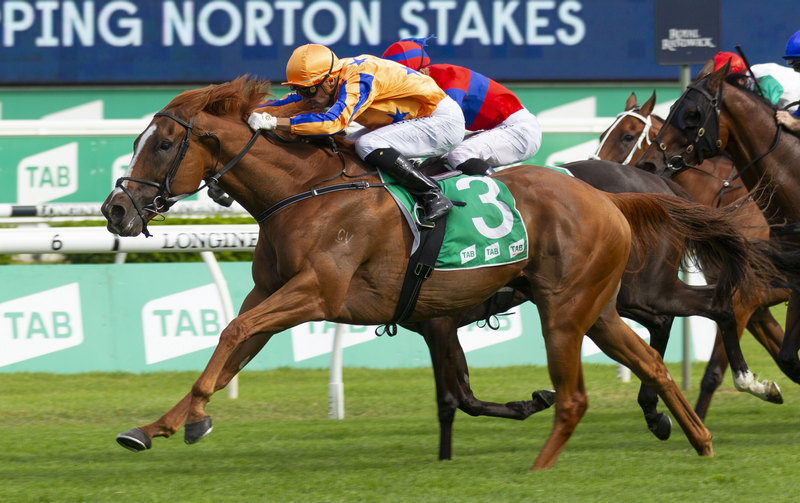 Richards left Melody Belle and Probabeel in Sydney under the care of stable employee Ashley Handley following their autumn campaigns, with both horses steadily building fitness.

Melody Belle is due to kick-off her campaign in the Gr.2 Missile Stakes (1200m) at Rosehill on August 8 as a lead-up to the Gr.1 Winx Stakes (1400m) at Randwick a fortnight later, with Richards mindful that the star mare improves markedly from her fresh-up run.

Richards was planning to have Probabeel in Melbourne to start her campaign on August 22 in either the Gr.3 Toy Show Quality (1100m) or the Gr.3 Show County Quality (1200m) but could also keep the Group One winning daughter of Savabeel in Sydney a bit longer.

“Three-year-old fillies, turning four, don’t have the best record going into the spring, so I think we need to be a bit cautious about what races we are targeting,” he said.

“We will probably try and stay away from the big heavy hitters in the weight-for-age races if we can and look at races like the Epsom (Gr.1, 1400m), the Sir Rupert Clark (Gr.1, 1400m) or the Toorak Handicap (Gr.1, 1600m). They are the sort of races where she would get in with a reasonable weight and have some appeal.

Richards was keen to have as many as a dozen boxes at Flemington during the spring, but hasn't been granted as many boxes as he would have liked.

“There are other options available that we are looking at,” he said.

Breeders will be denied access to Deep Impact’s Group One winning son Satono Aladdin, who will be unable to shuttle to Rich Hill Stud in New Zealand this season.

Strenuous efforts to secure passage for shuttling Japanese stallions to travel together to Australasia have been foiled due to the worldwide disruption to flights since the outbreak of the COVID-19 virus.

Rich Hill Stud’s John Thompson was keen to see Satono Aladdin, the winner of the Gr.1 Yasuda Kinen (1600m), return to the Waikato for his third season at stud but always knew travel was going to be a major hurdle to clear in this unique year.

“It’s down to the reduction in flights all around the world and air freight is at an absolute premium and they (Shadai) contacted all the major airlines that fly into Japan, but there are no freight space for two stallions and grooms,” Thompson said.

“It’s worldwide and that’s just the way things are at the moment. All parties have been trying for some time to hopefully make it happen, but cost effectively it just can’t be done.”

Thompson was still looking on the bright side and the drawing power of its quartet of residents.

“From our perspective it’s quite disappointing, but we have got four nice stallions here – two proven ones in Shocking and Proisir and two exciting ones in Vadamos and Ace High,” he said.

“It’s not the end of the world and we will have some lovely yearlings by Satono Aladdin to sell next year at Karaka.”

The travel issue for stallions coming from Japan could also be a potential issue for Japanese racehorses targeting feature events in Melbourne during spring, with grooms unable to travel with horses from Japan at present, a hurdle that would need to be overcome quickly if Japanese raiders are to be a factor.

The Kiwi import romped home by 17 lengths at Warrnambool on Sunday but the Ballarat horsewoman is keen to take the Raise The Flag seven-year-old through the grades.

“It’s so easy to get carried away but when you pull all of the sparkles back, it was just a maiden,” McDonald told RSN 927.

“We will go through the grades and then see where we fit in towards the end of the season.”

Prepared in New Zealand by Brian and Shane Anderton, Flying Agent won two of his 14 starts before transferring across the Tasman.

McDonald’s husband, jumps jockey Lee Horner, suggested McDonald enquire about Flying Agent who is a half-brother to top chaser Spying On You.
“I rang Brian and Shane and they gave my number to the owners and the owners rang me and the rest is history,” McDonald said.

“From the minute he arrived I have absolutely loved him. He was just a scrawny Kiwi Raise The Flag. There was never much of him and Brian Anderton said he used to feed him as much as he can, but he never gets any bigger, which is totally fine.”

Flying Agent will now head to a benchmark 120 Steeplechase (3200m) at Pakenham on July 19.

“It is too easy to get carried away and there is no harm trying to go through the grades,” McDonald said. “I really like him so I don’t want to rush anything.”