Chris Waller gave his stamp of approval before Star Of The Seas (NZ) stepped out in the Group 2 Blamey Stakes (1600m) at Flemington on Saturday which has ultimately led to the gelding securing a start in the world’s richest mile race.

Star Of The Seas secured the final ‘win and you’re in’ ticket into the $5 million All-Star Mile (1600m) at The Valley on March 13 in a brave win.

Waller was in Melbourne on Friday to run his eye over the team, the first time he had been down from Sydney for 12 months due to COVID-19 restrictions.

Jo Taylor, in charge of the Melbourne arm of Chris Waller Racing, said ‘the boss’ was quite bullish about Star Of The Seas chances in his 'hit and run’ visit.

“And we managed to get a ticket in the All-Star Mile, so that was a big tick today.

“He doesn't really know how to run a bad race and he’s down here now, so we’ll take him to The Valley to have a nice look around there and get accustomed to the circuit as we know it can be tricky sometimes.”

Providing Damian Lane the second leg of a winning double, Star Of The Seas ($3.90) scored by a short-neck from dual Blamey winner Fifty Stars ($12) with the $2.70 favourite Buffalo River a further 1-¾ lengths off third.

“He travelled really well and I wasn’t worried about the leader (Buffalo River) because of how hard he went he was going to be a statue late,” Lane said.

“I was more worried about if I was dragging anything off my back, like Fifty Stars.

“Fortunately, I got there at the right time and he was strong enough to fend off the challenger

“He’s so honest and in the last couple of years he’s run some big races in Group 1s.

“The form around him is really strong and he was well suited today.”

A six-year-old gelding by Ocean Park (NZ) from the Titus Livus (FR) mare Stella Livia (GB), Star Of The Seas has won eight of his 27 starts and $1,283,000 in prize money for connections Mr A M Muollo, Three Hooks Seafood, Mr D Sergi. 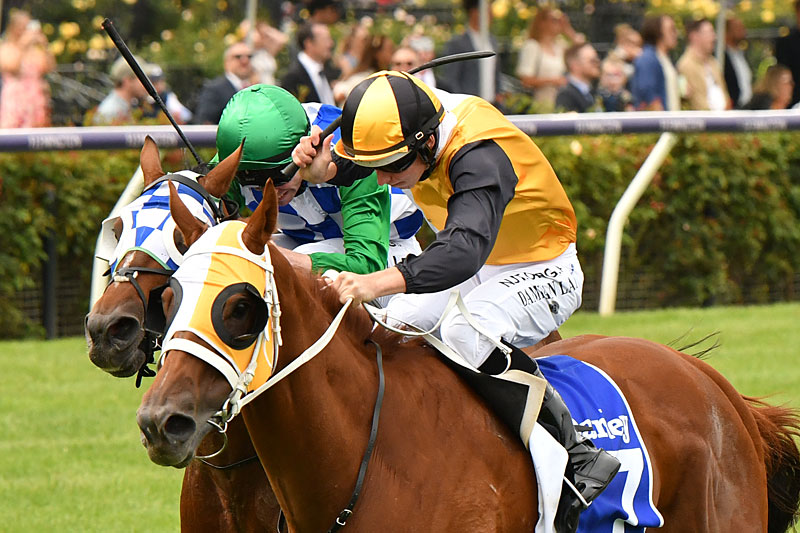 Star Of The Seas (NZ) and Damian Lane with Fifty Stars (IRE) and John Allen outside, picture Quentinjlang.com